Dr Shimon Yanowitz, about whom I wrote a post yesterday called “Dr Yanowitz’s “Connecting The Dots” Story“, talks with Sasha Latypova from Team Enigma Research, about what he found in “his own” unjabbed, unswabbed blood: He has not been fake-vaccinated, and he has never taken a PCR swab test, but he did get sick and is suffering from “long-covid” symptoms.

This is an Edited down and sped-up version of Dr Shimon Yanowitz and Team Enigma‘s Sasha Latypova (How Bad is my Batch? researchers) interview on September 20th, 2022. Watch Full Unedited Video: BitChute (46mins)

He was sick in October 2021 and wasn’t getting better. When he tests himself with an oxymeter, it gives him a poor score of 94%. He took these images with an optical microscope, a basic dark-field microscope, in about March or April 2022. More studies are needed by researchers and scientists all over the world, and we need people to isolate some of these structures to figure out what they are, where they come from, and what they do. Ideally, we need more powerful equipment (a very high-quality dark-field microscope costs upwards of €10,000) to have a better understanding of the composition and clearer images.

I took some screenshots of the video: 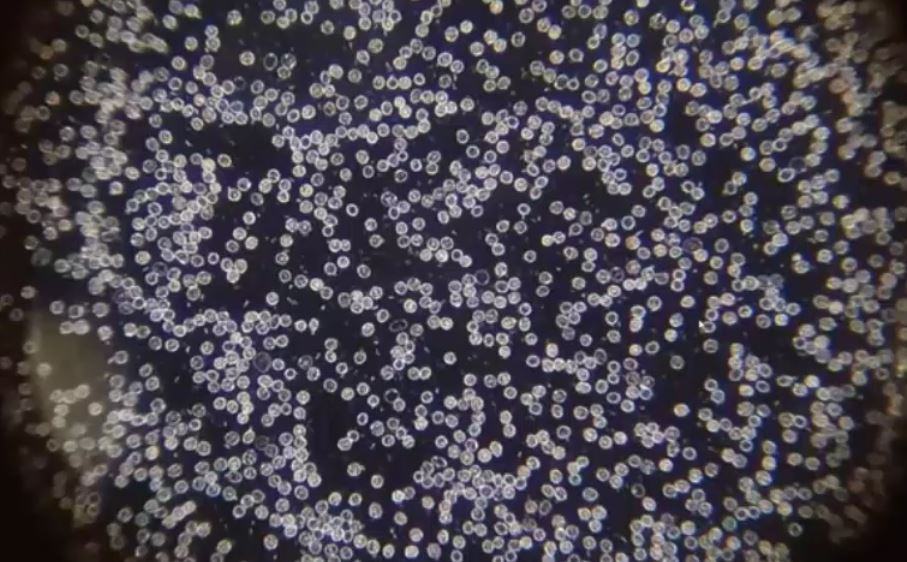 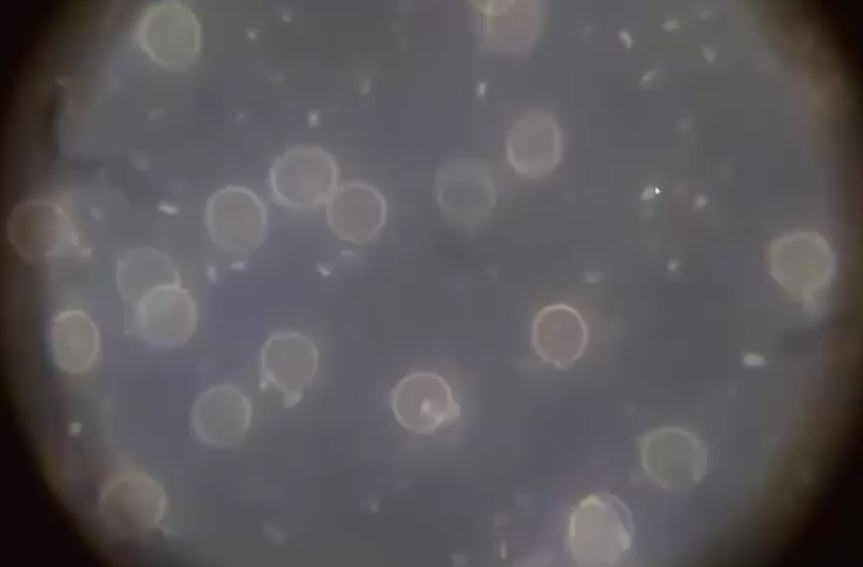 So he took some blood from a finger-prick and diluted it with saline (hopefully pure saline, not the UN-Graphene saline!) to spread the blood and open up the image. 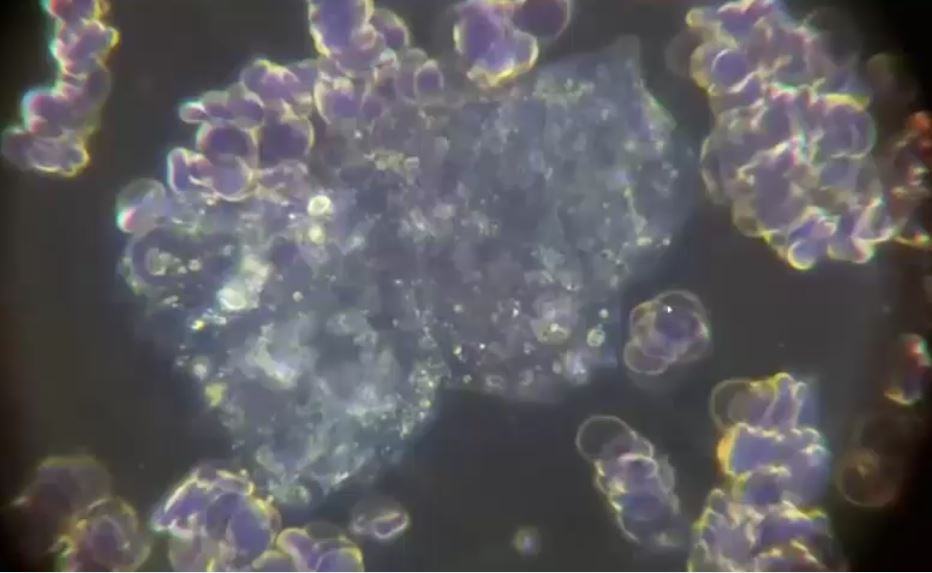 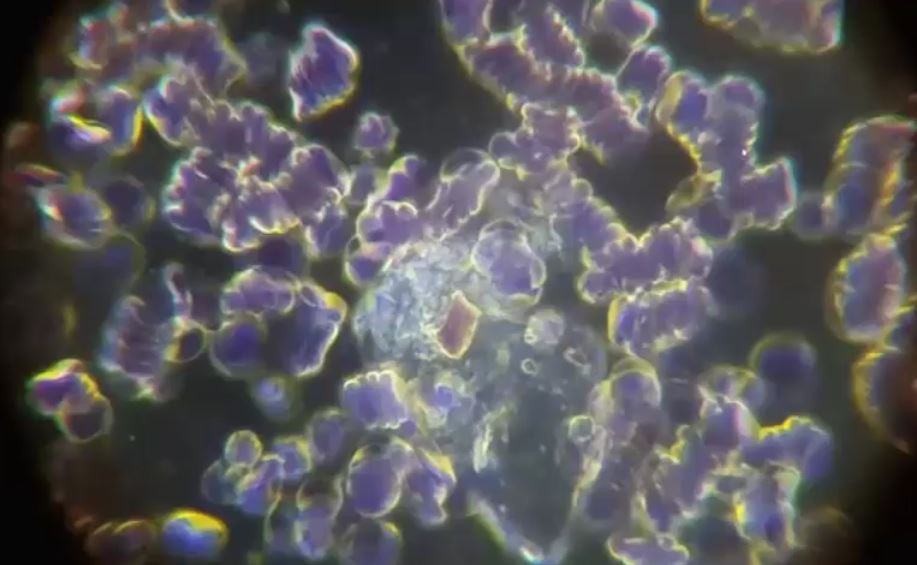 He also started to notice strange objects and things that should not be in the blood – that you never find in the blood. Biological matter, something that looks like membrane of a mould fungus like Aspergillus, and some non-biological structures – angular ribbons similar to the structures you find in the jabbed, that could be carbon-based. Not natural, not organic. Some could be contaminants in the slide, but there are ‘broken-looking’ war-head missiles, as well as other matter that looks like an organic membrane covered in metallic particles (debris that shouldn’t be there), and structures with straight lines, which are indicative of artificial, non-biological structures.

There are also micro-blood clots, which are more common, but what they’re finding all around the world since the jab rollout is that some D-Dimer tests are reporting a level of 10,000, which is ridiculously high. Seeing micro-clots is an indication that something is very wrong. (Scroll through 14 images – the last image in this series is what the blood looks like if he doesn’t dilute it with saline) 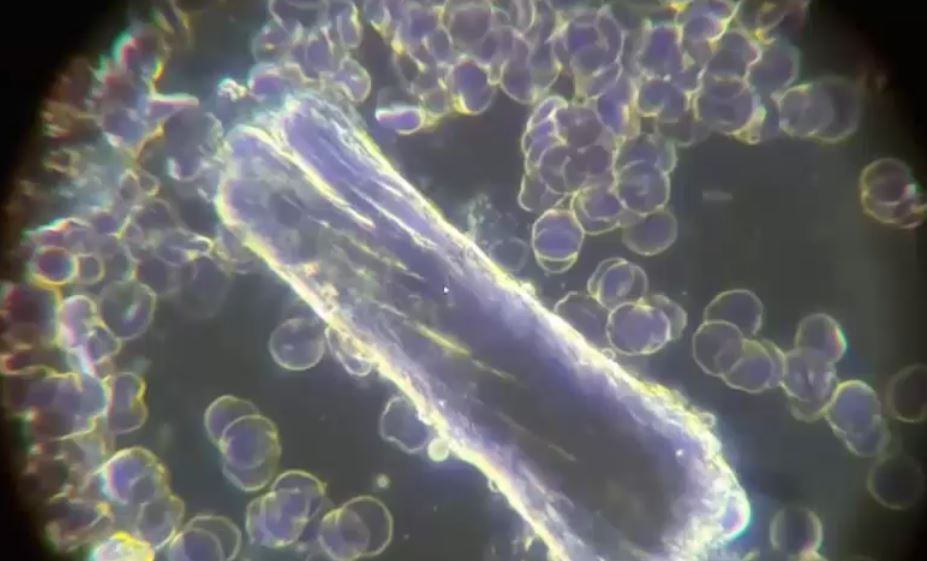 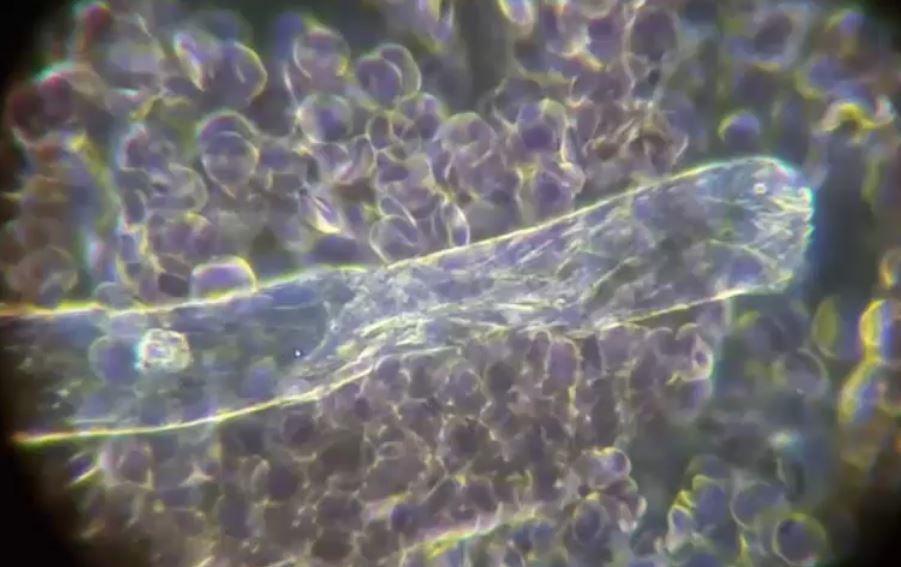 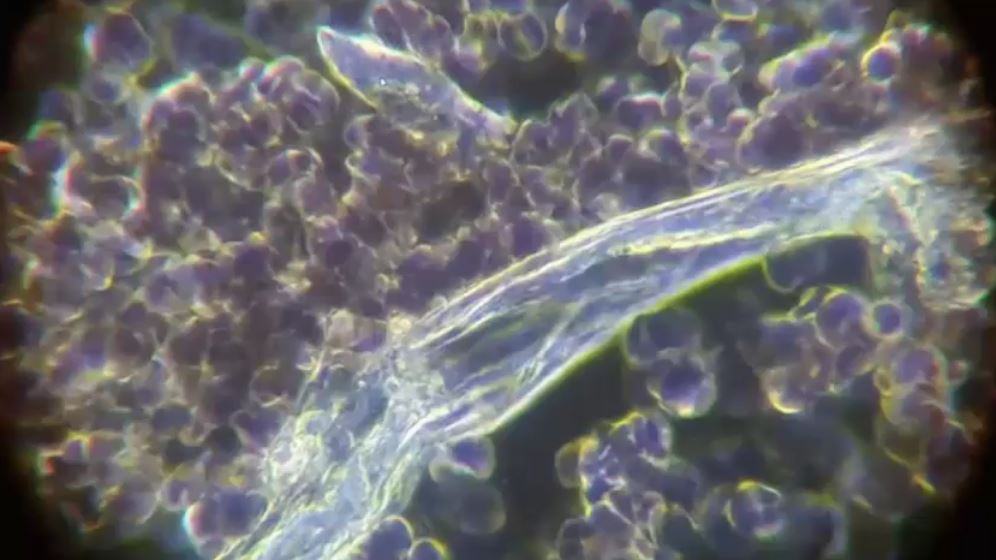 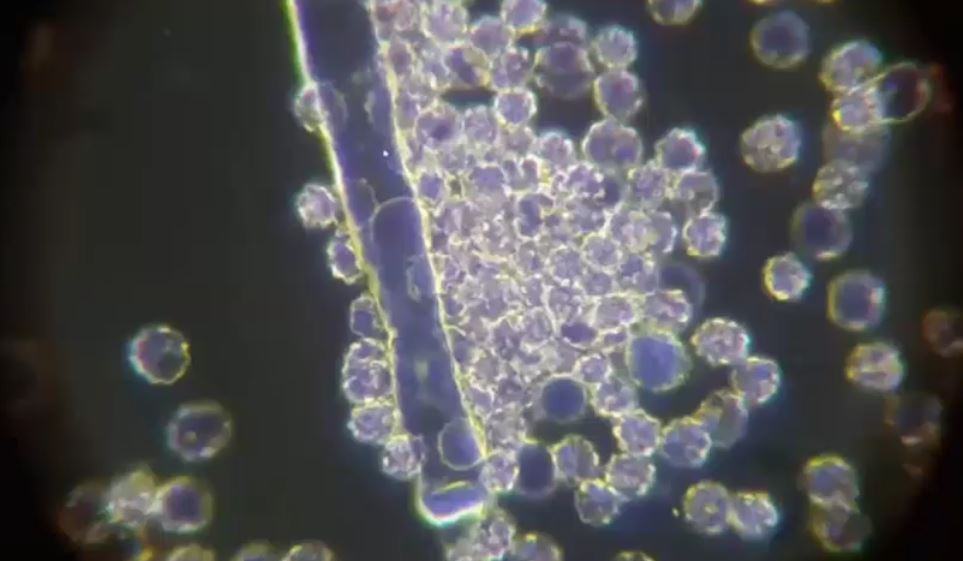 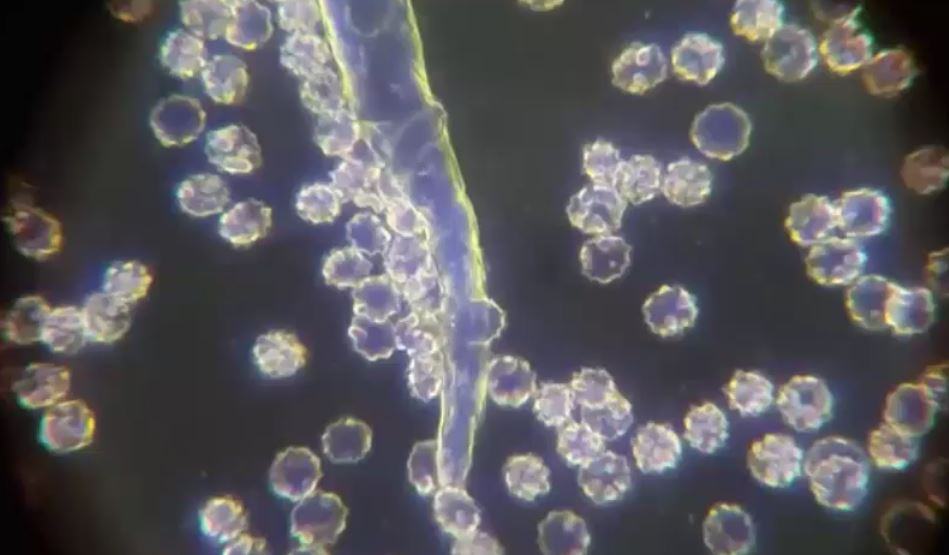 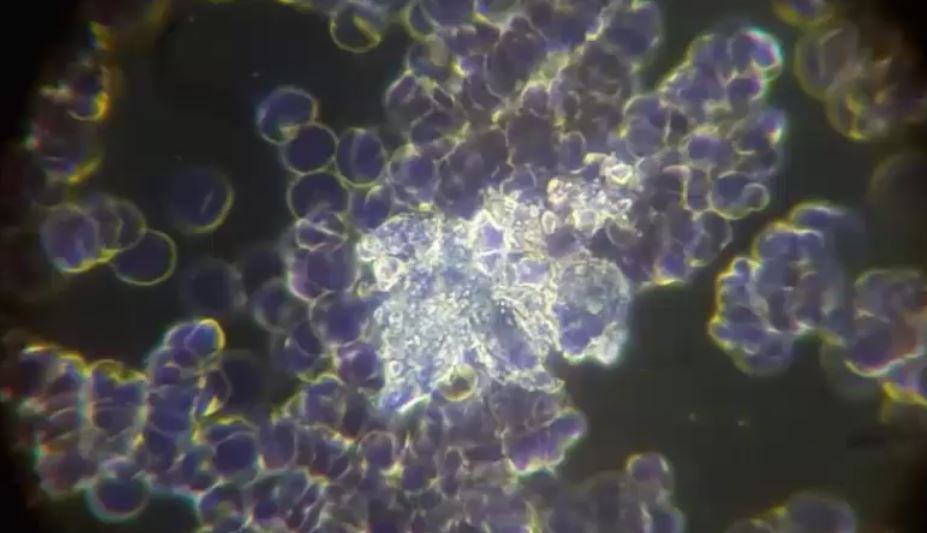 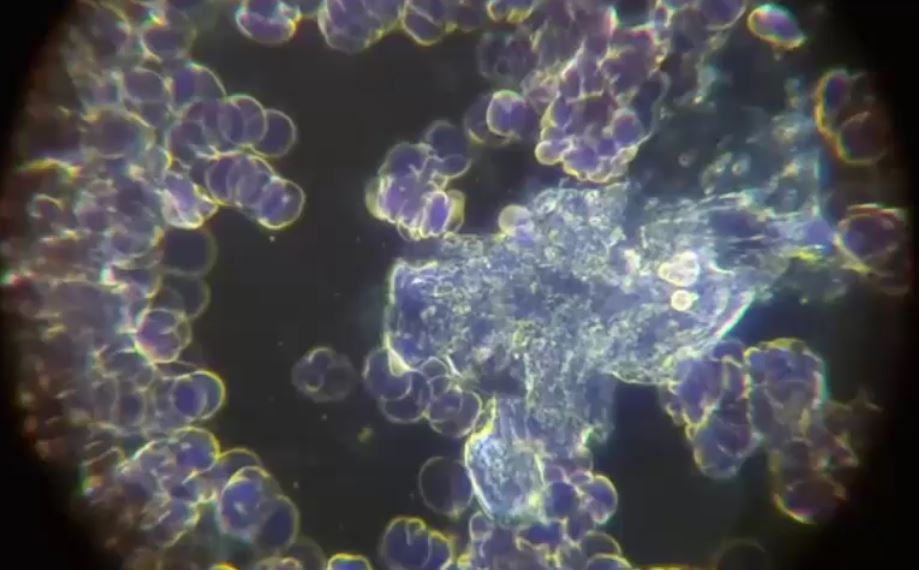 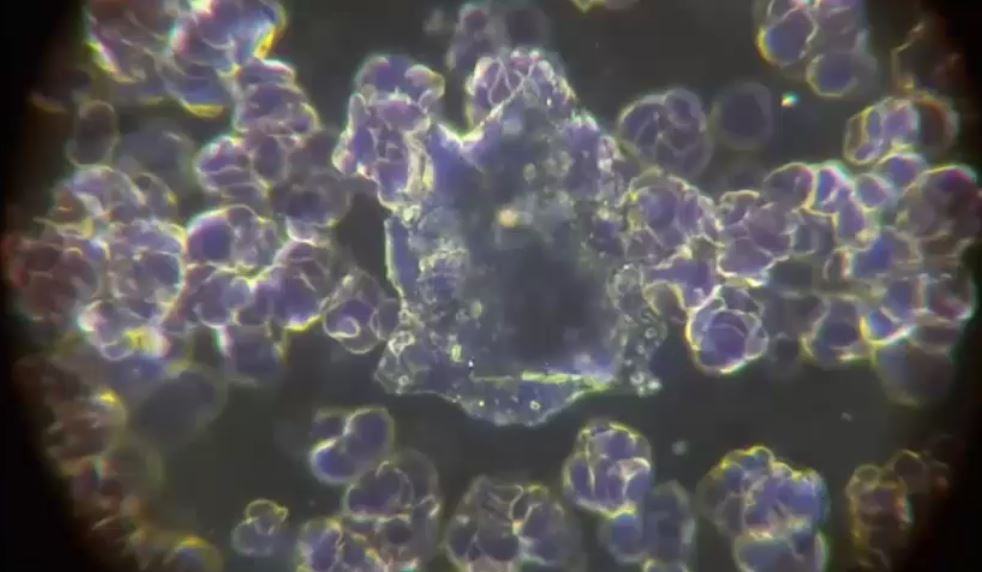 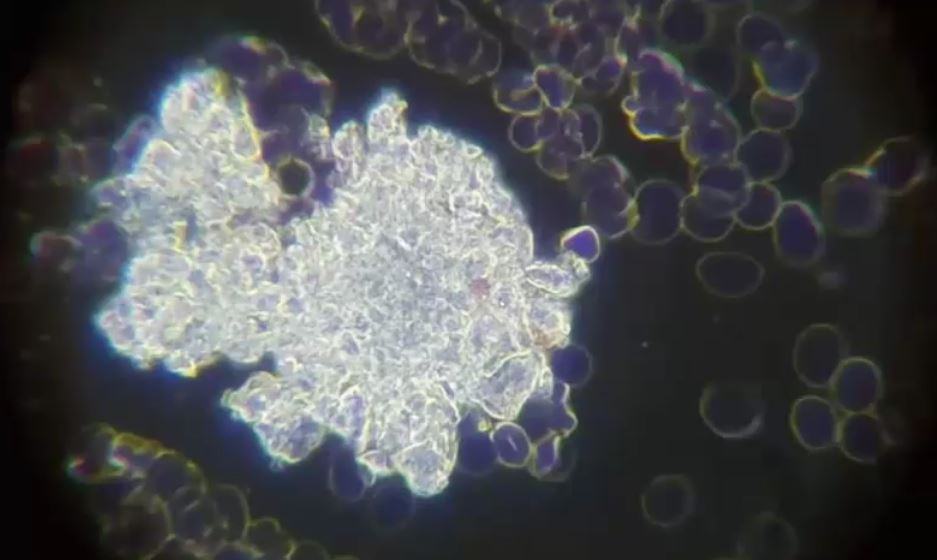 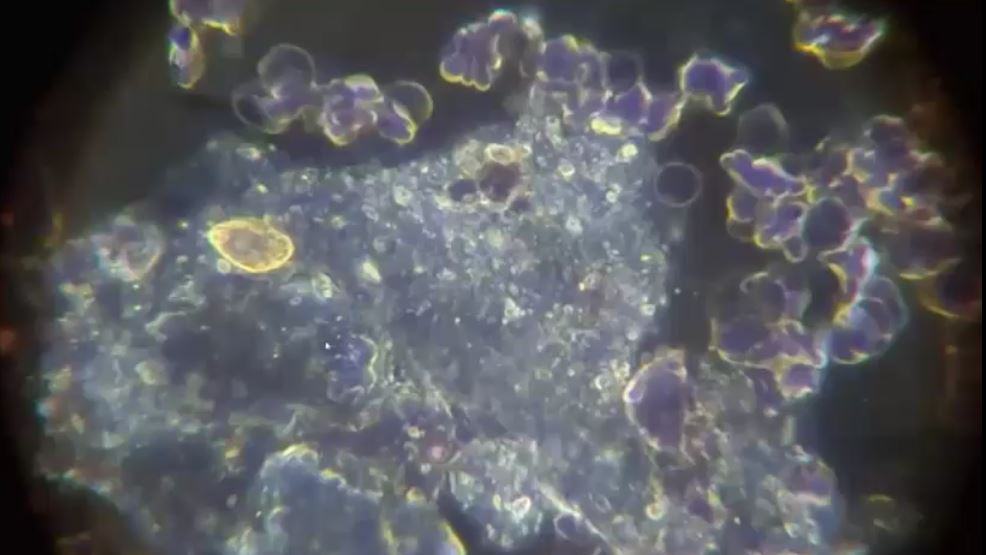 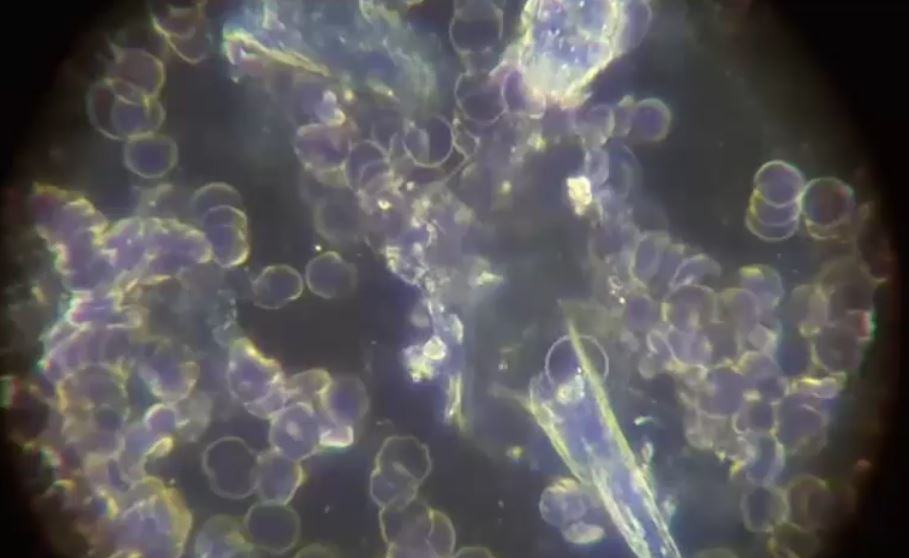 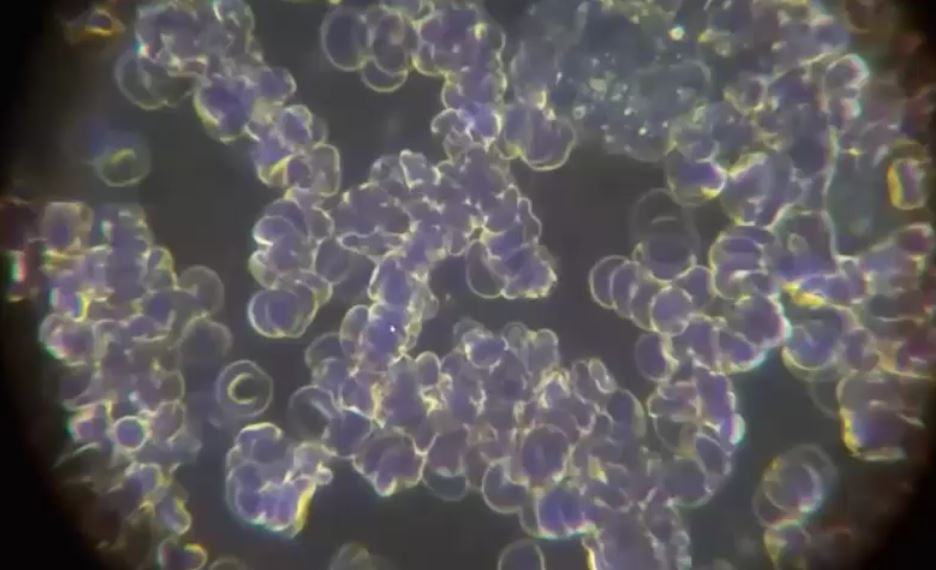 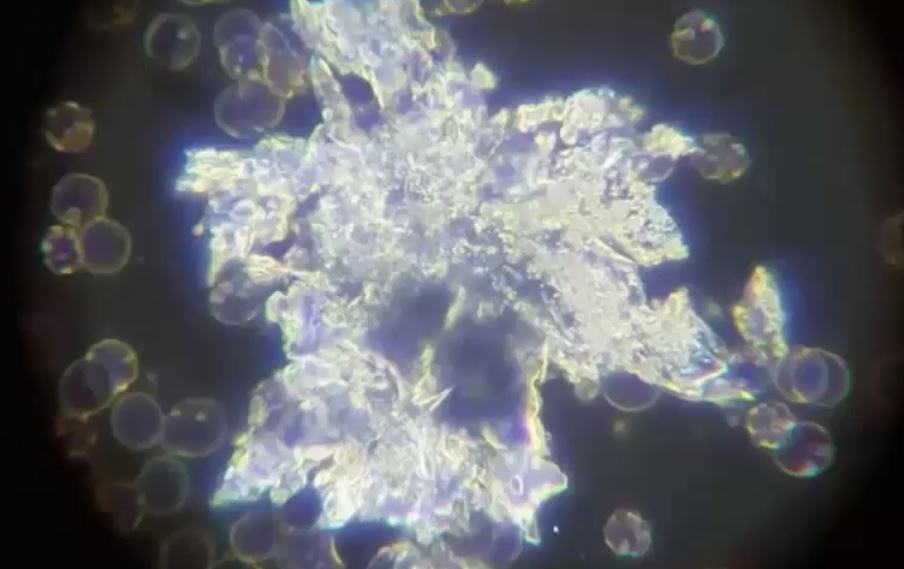 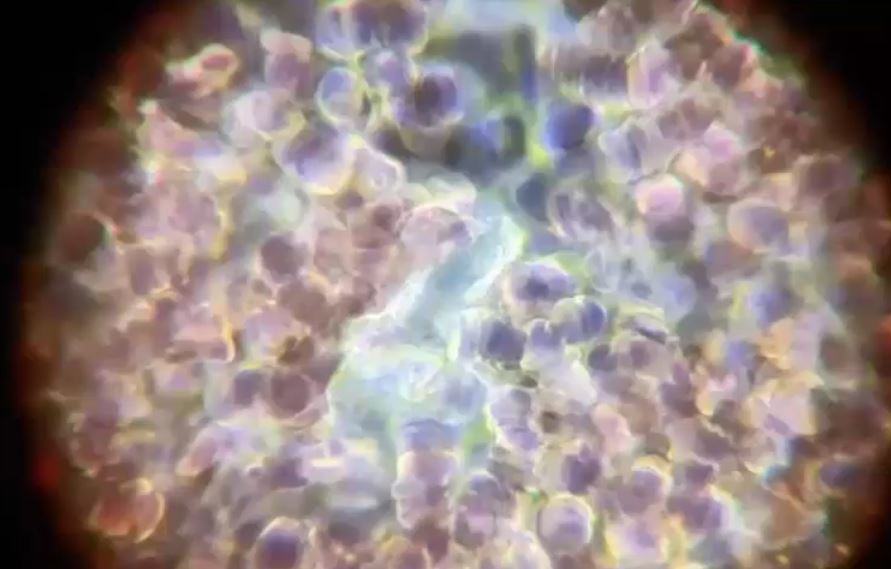 A reflective red-light gold-fish shaped thing that appears to be a rectangular piece of metal. Very concerning, not something you want to see in a drop of your blood. (It’s not carbon-based, because the colour doesn’t match). 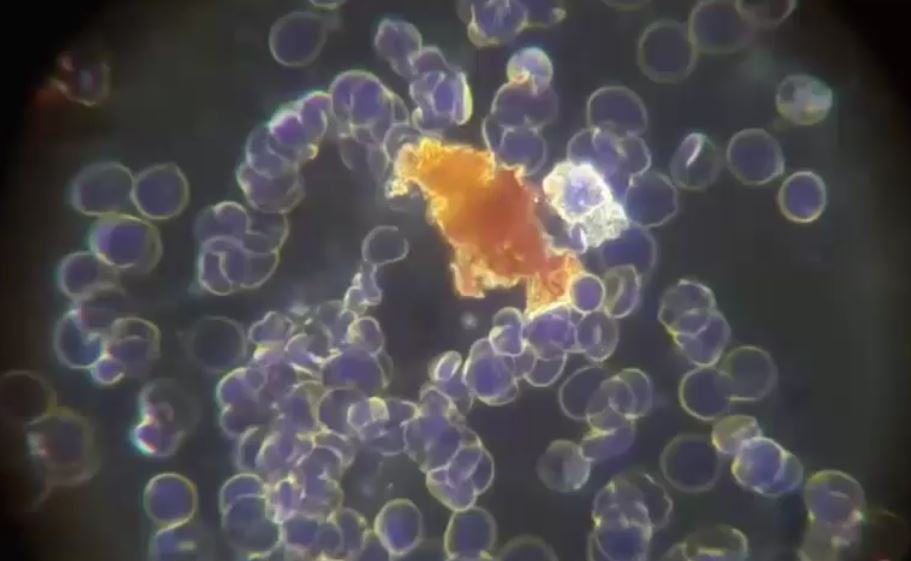 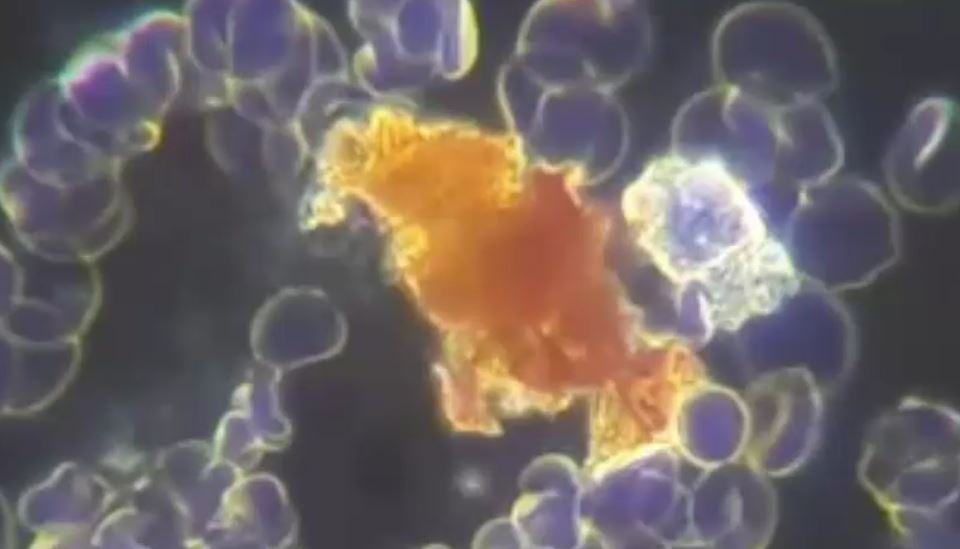 A membrane that has inclusions and some of them look metallic. Biological membranes tend to accrete other things that shouldn’t be in there. This one also has more crystals and a dark blob of concern. 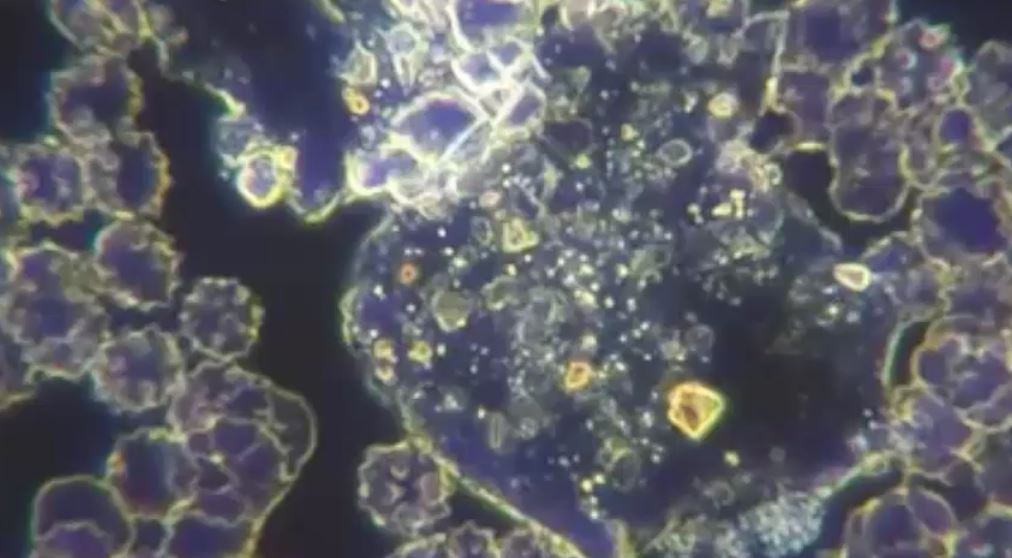 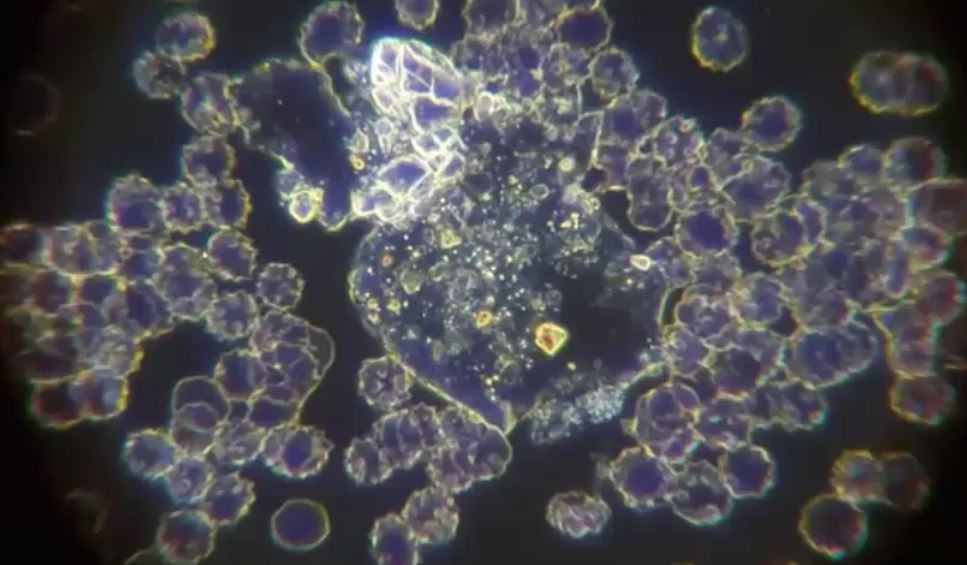 Here you can see a membrane and something that is stuck to it that appears to be a carbon-based intruder. The second image reminds him of a whale—from head-to-toe, it would be roughly 100 microns, which is rather big; seemingly a synthetic structure, maybe carbon-based as well. 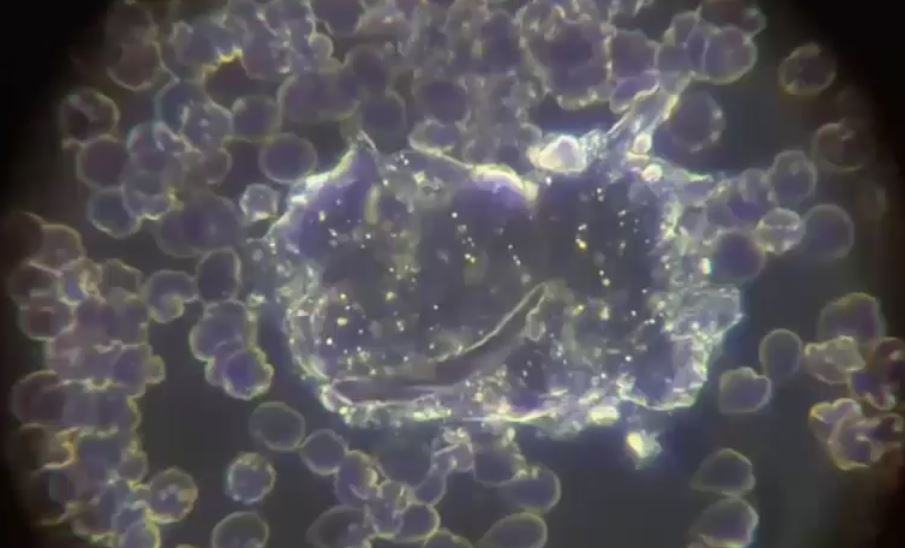 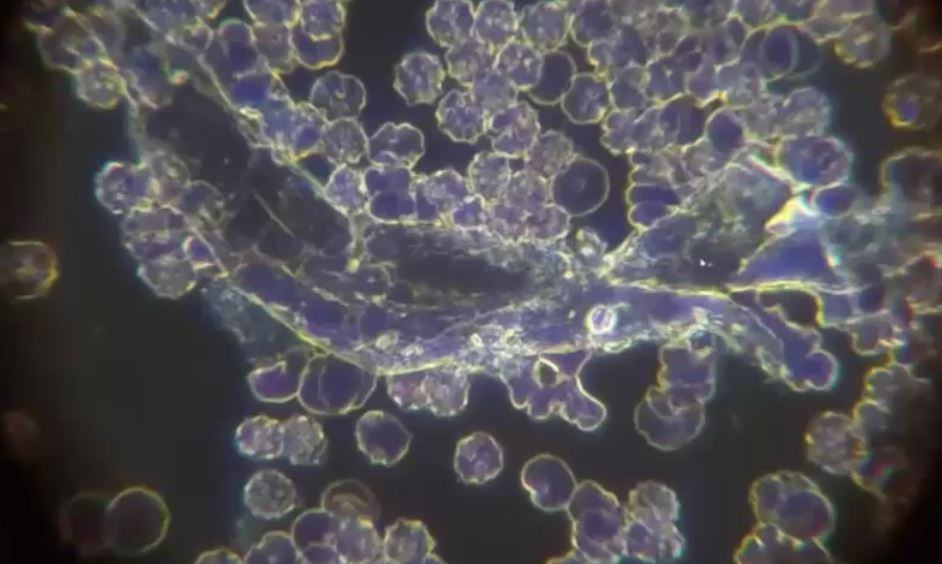 He noticed the lack of white blood cells that should be seen in the blood along with the red blood cells. The neutrophils should be “doing some house-keeping”, cleaning up this debris. You can’t see any neutrophils around the structures. He questions whether the neutrophils are dying when they are in the vicinity of the structures because it’s very toxic? And this is the same phenomena we’re seeing in the jabbed people – the absence or destruction of the neutrophils and other white blood cells that are normally there protecting the body. The level of the immunity would be quite low without these protectors.

How did it get into him when he hasn’t been vaccinated or swabbed? He hypothesises that it could be from the chemtrails, being sprayed in the air and inhaled or ingested, or perhaps the shedding mechanism that we already have evidence for (and that Johns Hopkins had already declared that they were developing self-spreading vaccines). You’ve got powerful companies creating “vaccine-lettuce and spinach”, and don’t forget one of Gates’s fave weapons of choice: “Flying Syringes” – mosquitoes that deliver a vaccine pay-load – I also found a patent using Toxic Mosquitoes as a bioweapon (01)

He did a conventional blood-test, where they took 5 vials of blood from him, but they couldn’t find anything suspicious. A colleague from Australia (Jerry) told him that nowadays all blood tests are automated by machines and computers; so no human looks at your blood.

They also did a white blood cell count, and found that his blood ‘does’ contain white blood cells, and another mutual friend (Wayne), also from Australia, told him that although there are neutrophils in his blood, the ratio is wrong. The ratio between the neutrophils and the lymphocytes – which should ideally be 3, in his case, was about 1, which was way too low.

He reiterated again how researchers are all finding neutrophils being destroyed; either in the battle, or when trying to attack these structures, they get poisoned and die.

(I’ve started a post about neutrophils that I haven’t published yet, but it will be posted under the tag Neutrophils when ready)

Read the post I did on Dr Yanowitz yesterday: “Dr Yanowitz’s “Connecting The Dots” Story“

“I can see more than one technology in the vials. One looks like worms or ribbons or synthetic parasites.  And the other one is electronic circuitry which is not a parasite.  And there could be other things.

It is my [opinion] that we are in a genocidal war.  The rulers of the world have declared war on the citizens of the world with the intent of wiring them to the [artificial intelligence] AI-based ‘cloud’ or killing them.”

You can heal yourself of ANYTHING, any illness or dis-ease. Just STOP doing what made you sick, and START doing what will Create Powerful Health. There are NO incurable diseases, NONE.

Take RESPONSIBILITY, and be willing to CHANGE, and you can heal yourself of anything.