“Nanoparticulate matter – bio-penetrable, controllable robotic units at the nano-scale – can be aerosolized & weaponized” – Dr. James Giordano – 40 years of experience in neuroscience and prestigious credentials/history of working with DARPA/Pentagon.

29 Oct 2018 | Rumble | Telegram
Clip from: “The Brain is the Battlefield of the Future”
Professor Dr. James Giordano presentation to United States Military Academy about the human brain and the future of war at Modern War Institute, West Point.

In the full 1hr lecture (see below), we learn that modern warfare is not done with guns, but drugs, nano-science, mind-manipulation (foster thoughts to change beliefs, feelings, emotions), and more. Very, very interesting and a plausible possibility of how they mind-fucked humanity during the “COVID-19 War” and for years.

It even describes a plausible neuroweapon that can taking over minds (or rather “recruit/influence them to think something is a good idea, etc. the opposite of what they believe“) including leaders military, enemies & targeted individuals. And neuro-microbiological agents / neuro-microbials that have high neuro-psychiatric symptoms for use in creating “public panic” which makes them easier to control, or gene-edited microbiologcals with morbidity/mortality profiles. Um, yeah. So there’s that. And this was a lecture in 2018.

Now if only he could give us the antidote to this #covidpsychosis rather than just disclosing the technology — and he still works for them so… we might not get the exclusive on that one).

Who is this guy?

James Giordano, PhD, MPhil., serves as the Executive Director of The Institute for Biodefense Research; a renowned neuroscientist and ethicist with over four decades experience in the field, his areas of expertise include the development, oversight, governance and control of biological, chemical, and cyber/informational weapons; scientific and technological approaches to human performance optimization; and international ethico-legal and social issues of biosecurity and biodefense.

Dr. Giordano is a Professor in the Department of Neurology and Biochemistry; Chair of the Subprogram in Military Medical Ethics, and co-Director of the Program in Brain Science and Global Law and Policy at Georgetown University Medical Center; Distinguished Fellow in Science, Technology, and Ethics at the Stockdale Center of the United States Naval Academy; Senior Fellow in Biosecurity, Technology and Ethics at the US Naval War College, Newport, RI; Senior Science Advisory Fellow of the SMA Branch, Joint Staff, Pentagon; and serves as Senior Bioethicist of the US Defense Medical Ethics Center (DMEC).

He is Chair Emeritus of the IEEE Brain Initiative Ethics and Technology Project; served as an appointed member of the Neuroethics, Legal and Social Issues Advisory Panel of the Defense Advanced Projects Agency (DARPA); as Research Fellow and Task Leader in the Program on Dual-Use of the European Union Human Brain Project; as Advisor to the Program on Dual-Use Biotechnology of the Organisation for Economic Cooperation and Development (OECD); and as an appointed member of the Department of Health and Human Services’ Secretary’s Advisory Committee for Human Research Protection (HHS-SACHRP).

Prof. Giordano is the author of over 300 peer-reviewed publications in neuroscience and neuroethics, 7 books and 35 government white papers on bioscience and technology, biosecurity, and ethics, and is an elected member of the European Academy of Science and Arts, and a Fellow of the Royal Society of Medicine (UK). A former US Naval officer, holding designations as an aerospace physiologist, research physiologist, and research psychologist, he served with the US Navy and Marine Corps.

And we can manufacture materials that have discreet properties that can be controlled by virtue of bioengineering in their physical chemistry. To auto-aggregate, to be able to aggregate in particular areas based upon their biological and your chemical sensitivity.

But now we go one step further. Most recently, just a few weeks ago, it was announced you could then aerosolize nanomaterials.

And go one step further. I can create small robotic units. Controllable robotic units at the nano-scale, and that these, too, can be aerosolized, to create a nano-swarm of biopenetrable materials that you cannot see, that can penetrate all but the most robust, biochemical filters, that are able to integrate themselves through a variety of membranes, mucus membranes, and wherever – a mouth, nose, ears, eyes… Can be then uptaken into the vascular system to create clumping, can affect the vascular system of the brain, or can directly diffuse into the brain space, and these can be weaponized. And they can be done in such a level, that their presence is almost impossible to detect, and as such, the attribution becomes exceedingly difficult to demonstrate.

How much of this material would I need? Take a look. This is the front of my pen. This amount of nanomaterial, if be able to maintain and sustain with regard to its deliverability and aerosolization, could, in fact, affect all of you. Or, based upon where I come from, New York City, all you’se.

Look at this. Look at this. I’m carrying that material. Would you see it? Would I have to lug a giant weapon into the room? No I wouldn’t. And what if, in fact, I utilized some form of an unmanned aerial device, or unmanned ground devices delivery vehicle? Something like a drone? Or a bug? Could I do something with that?

“The Brain is the Battlefield of the Future”

As someone with 40 years of experience in neuroscience and prestigious credentials/history of working with DARPA/Pentagon, brain science/interfacing technologies, “neuroethics”, etc., Dr. Giordano lays out their agenda in this one hour presentation; no efforts to sugar-coat, hide or discreetly allude their motives.

For those who don’t believe that brain manipulation/mind control is a real endeavour, this single presentation lays that speculation/disbelief to rest. It is not a “conspiracy theory”. It is a cold, hard fact. 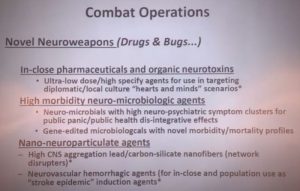 This is his CGSR Seminar on “Brain Science from Bench to Battlefield: The Realities – and Risks – of Neuroweapons” but I would title it “Influencing ‘Individual’ and ‘Group Brains’ – Neurowarfare, Drugs, Gene-Tech, etc.”

The use of sarin gas in Syria and the nerve agent VX to assassinate Kim Jong-nam, and ongoing efforts in brain science by both nations and non-state actors (inclusive of a growing community of do-it-yourself/biohacker scientists) prompt renewed interest in the current and near-term possibilities of developing and employing neuroweapons. Discourse at the most recent meeting of Biological, Toxin, and Weapons Convention (BTWC), and ongoing efforts of a Working Group of the European Union Human Brain Project reinforced the need to more rigorously address research and use of weaponizable brain science.

In this briefing, neuroscientist and neuroethicist Dr. James Giordano of Georgetown University Medical Center discusses how new developments in brain science afford potential utility in military, intelligence and warfare operations, addresses implications of neuroweapons, and details the need for improved identification, surveillance, guidance and governance of brain science that can be used in military and warfare applications, and thus pose defined risk and threat to security interests.

“Battlescape Brain: Military and Intelligence Use of Neurocognitive Science“

But I would call it “Modern Warfare: Drugs, Bugs, Toxins, and Devices”

This presentation is part of the ‘Brain Science and Effective Leadership Series,’ hosted by the Stockdale Center for Ethical Leadership. Dr. Girordano is with the Georgetown University Departments of Neurology and Biochemistry, working in the Neuroethics Study Program, which is a part of the Program in Military Medical Ethics. He also is a Fellow of the Program in Biosecurity, Technology, and Ethics at the Naval War College. In this invigorating and, at points chilling, talk he discusses various potential uses of neurocognitive science in military and intelligence operations, and sketches ethical issues, and angles of analysis that will arise as both allies and adversaries develop such tools, relating them to existing laws of war and conventions.