Just a little whinge, moan and speculating rant about this saline-graphene worldwide patent by the Director-General of UN’s International Vaccine Institute.

“The physiological saline solution containing dispersed graphene of the present invention is intended to be used as a therapeutic agent for viruses such as MERS, SARS, and corona. When the virus and graphene powder meet, the graphene powder and the virus are attracted and adhered to each other with nano-cohesive force. If graphene powder adheres to the body and spikes of the virus, the virus does not function properly and cannot multiply and eventually dies.” 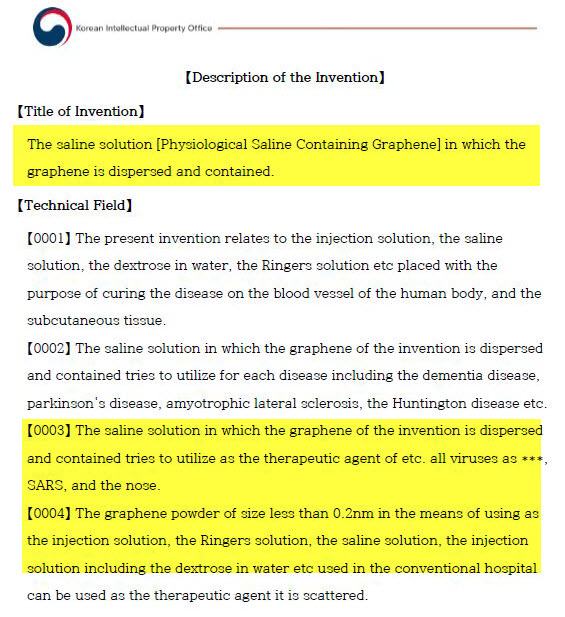 (Wait, we’re promoting a narrative that “graphene” is a “virus-killer“? I guess that’s partly true, in that, graphene is highly toxic to humans and if you kill the human – you have a “2 birds with 1 stone” scenario – just like everything in this inverse-world though, all of these evil-corps & evil-doers promote what benefits them, and evade and conceal the “risks vs benefit” for thy human-cattle/slaves)

My rant/beef is about the conflict$ behind the patent:

He has been the Director General (or Secretary General – depending on translation) since June 2015 of the International Vaccine Institute which was established by the United Nations.

This is a Worldwide Patent by the head of the UN’s IVI – the only international organization for vaccine development in the world.

Not just a conflict of interest that you make money from every jab or drug or aerosol of saline/graphene (that uses his method), and that in itself should be forbidden (or least known by everyone), if graphene is indeed in the vials, and this saline method is the delivery system, then it’s possible that graphene has been injected in shots and drugs in the lead-up to the pandemic (past flu shots or vaccines and potentially other drugs).

(So potentially the cause of graphene-toxicity: “flu-like-symptoms/auto-immune/cardiac/neuro/kidneys-lungs-you-name-it” in the years before and possibly even the cause of the pandemic-narrative to begin with – i.e. 3-in-1 or 4-in-1 Flu shots were given in Nursing Homes in Italy prior to the “outbreak” – what’s in those vials? and ‘the flu’ killed 80,000 people in the US 2017-2018 season – which was the highest in the previous three decades — and the highest deaths in the past 30 years was 56,000).

I occasionally ask about the flu shots to people working in those aged care homes at the start of the pandemic but noone has answered me so far.

If you’re going to maim the world’s population, you might as well control and profit from it, right?

This is especially key if you look at the side-effects of Graphene Toxicity which matches COVID-19 symptoms (as do many things – especially as the “symptoms” of COVID-19″ pretty much account for any symptom (including NO symptoms) that any human may get at least a couple of times a year if not more). God knows what their real diagnosis should be – if we weren’t hysterically and chronically diagnosing everyone with COVID-19 and giving them all the same useless treatments.

Patent inventor is also a HIV Vaccine guy – including experimenting on the US Army.

Speaking of South Korea’s conflict$… Kim Jung-sook is the wife of South Korea’s president Moon Jae-in. She’s the “honorary president” of the International Vaccine Institute’s Korea support committee and has agreed to Bill Gates to expand vaccine-development and treatments.

(…talk about marrying Pharma with Governments)

The saline/graphene patent is interesting because there’s a few out there completely dismissing (I mean aside from the fraudulent fact-checkers & bigtech censorship) the laboratory results coming out from at least 6 countries doing vial-testing that contain strange-looking contaminants that look remarkedly similar to graphene (the UK-Lab is so certain, they have submitted their findings (download PDF) to a current police case for crimes of Corporate Manslaughter and Gross Criminal Manslaughter). Also don’t forget the Pfizer whistleblowers – that definitely should be raising an eyebrow before dismissing it completely – these guys definitely don’t have a benevolent track record.

Dr Richard Fleming & Dr. McCairn (who have both done their own lab-testing of the USA vials and found differing results than the other countries) speculate that these other labs must have ‘dirty slides‘ or that it’s ‘salt‘ they are seeing. Assuming the slides are clean… if it’s “salt”… what if it’s actually this graphene-saline concoction they are seeing?

(My question is: What if all of them are right – they just don’t know how to test for saline-graphene? Can we do some comparisons with saline-graphine, saline, and the vials?)

This Saline-Graphene patent + it’s connection to the worldwide vaccine rollout = is something to think about when considering their “salt-not-graphene” hypothesis.

Ok rant-over about the Conflict$ of Interest and “Salt-not-Graphene” theory…. here’s a better analysis of this patent which dives more into it’s “contents” by Mik Anderson (post is in Spanish – select “English” in the sidebar): 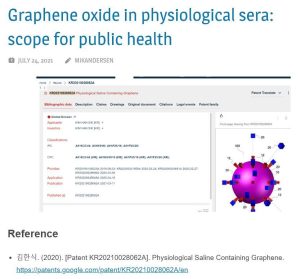 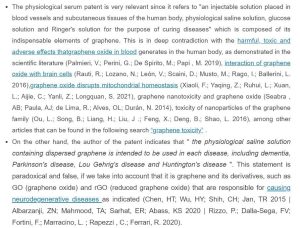 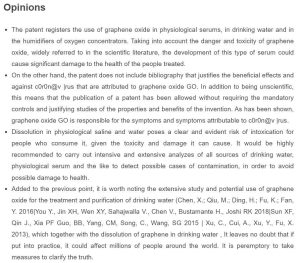