I have over 500 broken links since the last time I checked. Tonight I went through some of them, looking them up on the archive sites to see what has been “cancelled”. I see that the powers-that-be are continuing to delete evidence against them, and I thought I’d do some screenshots of some of them.

Thank goodness for the archive sites and backups, or there’d be no trace of what they are doing.

A 2008 article on Reuters “NewsHour gets $3.5 million from Gates Foundation” which was linked to from my Bill Gates – Corbett Report – COVID Agenda post is no longer on the Reuters website. 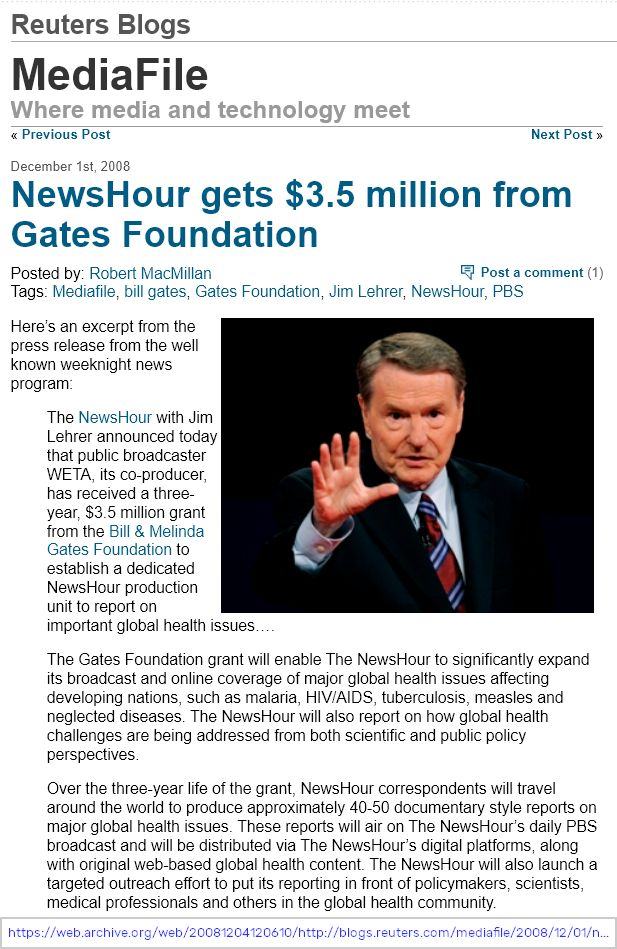 Yep… Rockefeller University reported on this 2014 study, ‘Radiogenetics’ seeks to remotely control cells and genes disappear, that gushed about having teams working on remotely controlling biological targets in living animals—rapidly, without wires, implants, or drugs.

I had this linked to from my John D Rockefeller Wiped Out Natural Cures To Create Big Pharma [Video] post, but it really should be plastered on all my transhumanism or bioweapon posts or even my vaccine posts because – I kid you not… they say:

“You don’t have to insert anything — no wires, no light systems — the genes are introduced through gene therapy. You could have a wearable device that provides a magnetic field to certain parts of the body“

and they have even more alarming studies showing their ability to manipulate minds via magnetic radio waves and more (read the full post), but basically everything the so-dubbed “conspiracy theorists” were warning about, they’ve been able to do for many years. (01) 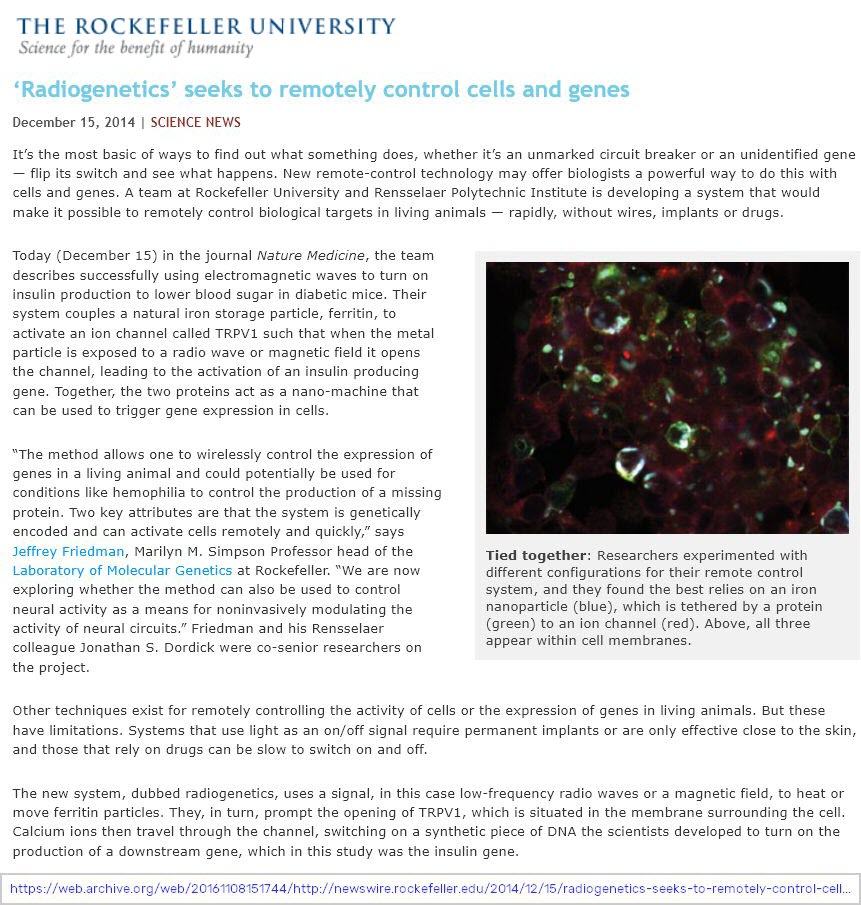 Next, a W.H.O./World Bank/U.N. report from 1995 regarding getting certain (unspecified) demographics sterilized urgently for population control…. via “anti-fertility vaccines that attack the bodies own cells“

“The anti-fertility vaccines that are being researched refer to the mode of action of conventional vaccines against diseases. They are based on the stimulation of the immune system, but unlike anti-disease vaccines which target foreign substances, anti-fertility vaccines evoke antibodies against the body’s own substances like molecules. As a result, the body’s self-protection is reprogrammed to attack targets the body normally tolerates. To that end, the targeted, normally tolerated molecule, has to be linked to a foreign protein, rendering the entire product ‘foreign’ and inducing an antibody reaction.” (02)

The 1995 link ‘Challenging the Immune System: The development of anti-fertility vaccines‘ was another one on my Bill Gates – Corbett Report – COVID Agenda post. 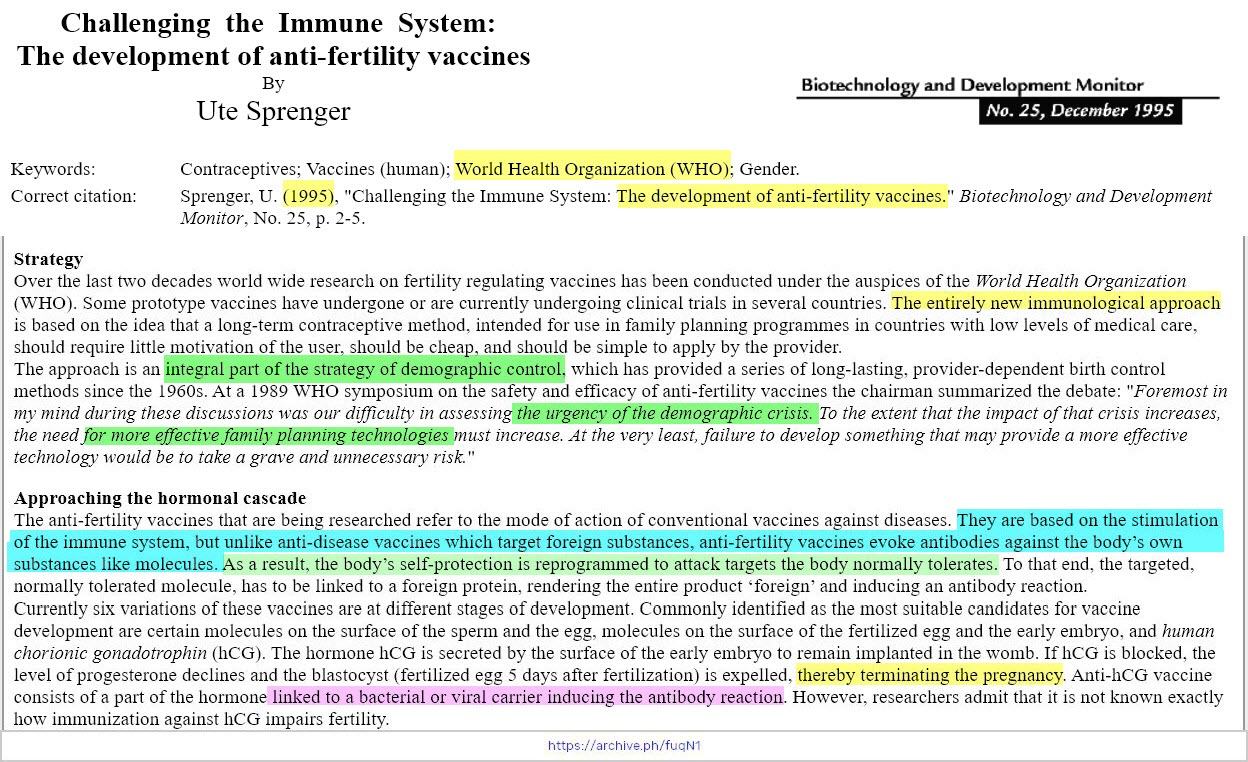 I know this might be shocking to some that haven’t caught on to the true agenda and still think the H in World HELL/HOMOCIDE organization stands for health, but other than…

… not knowing if the women would ever become fertile again due to not even understanding how this “new technology” works to begin with, and not only did they warn about it being used for nefarious purposes with concerns on the ease of using it without consent, “one of the trials in June 1994 was suspended because the first seven volunteers to receive the vaccine all experienced totally unexpected side-effects which included pain at the injection site, fever and sterile abscess formation“.

WOW! WAIT… WHAT?? <– THEY ACTUALLY STOPPED a trial because 7 people had THOSE side-effects?? What about death, myocarditis, cancer, paralysis, neurological issues, and the endless list of suffering that these new franken-jabs cause? No halt to these trials? That doesn’t alarm anyone, right? No, because these new concoctions are demonocide-bioweapons or democide? The new franken-jabs are touted as “safe and effective”, mandated, and rolled out to kids and pregnant women—even though Pfizer had 1223 deaths in the first 2.5 months and more than 40% were hospitalized from their “side effects”… Wow, just wow, what a different world we’re in, huh? An evil world indeed.

CBC deleted their 2010 article “Pfizer to pay $142M for drug fraud“, and it looks like it was last successfully archived in May 2022, so they only just wiped it recently. I had this on my “Why do you assume Pfizer are ‘the Good Guys’?” post. 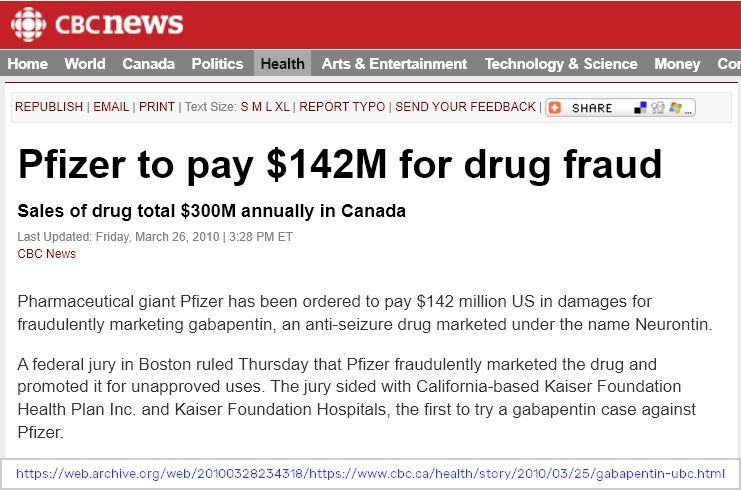 Next – an exposé on the drug regulators suppression of natural cancer cures.

The whole website seems to be gone, that contained this article ‘7 Natural Cancer Cures That Have Been Buried by the FDA, AMA and CDC‘ which I had on my Beating Cancer With Natural Medicine (Dr Lam) [Free Book & Protocols] post. 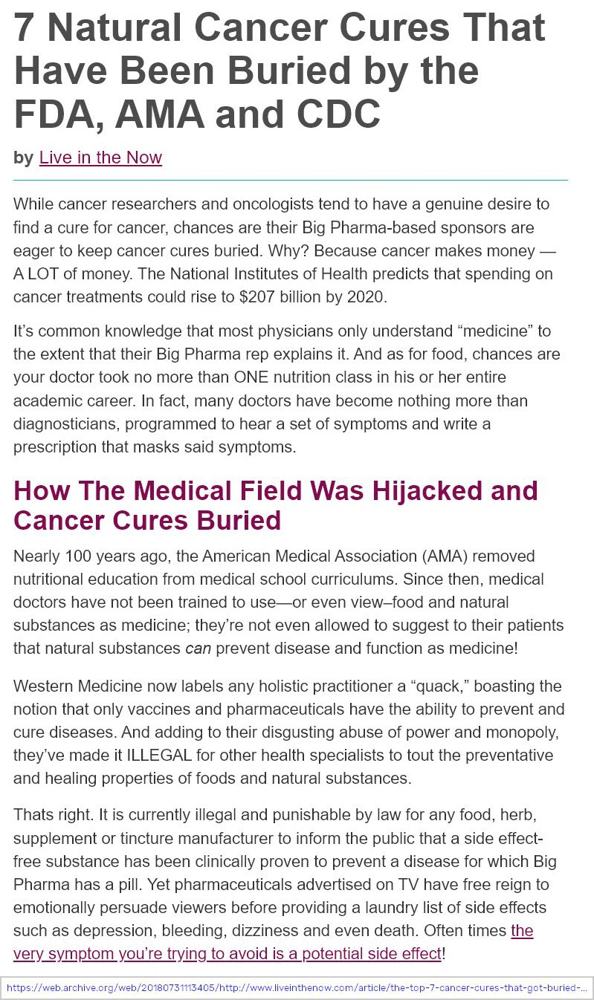 News.com.au removed their Ebola outbreak 2014: The terrifying statistics you need to see article that I had on my old Ebola Virus Audio Notes post… but why delete it now, in 2022? I guess because it shows how copy-paste their scare-mongering campaigns are. Reading an 8 year old article just now and it’s just uncanny. Check it out… “cases”.. “deadly”… “terrifying”… “world’s top scientists”… “cases are doubling every 30-40 days.”.. “Here are the terrifying Ebola visuals”… “Growth is out of control!” … “the MODELLING says”… 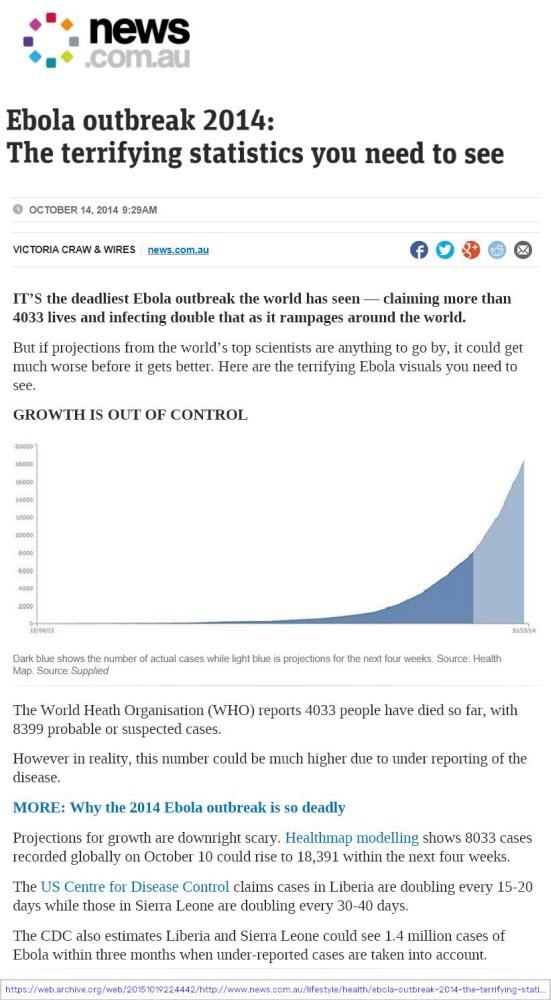 “The World Heath Organisation (WHO) reports 4033 people have died so far, with 8399 probable or suspected cases. However in reality, this number could be much higher due to under reporting of the disease. Projections for growth are downright scary. Healthmap modelling shows 8033 cases recorded globally on October 10 could rise to 18,391 within the next four weeks. Australia has so far contributed about $18 million in financial assistance to fight the disease.“

Next up, Pfizer deleted a 2012 Press Release

I had a link to a 2012 Pfizer Press release on my “Why do you assume Pfizer are ‘the Good Guys’?” post which was a press release admitting improper conduct in Bulgaria, Croatia, Kazakhstan, Russia, Italy, China, the Czech Republic, Serbia, Saudi Arabia, Indonesia and Pakistan. 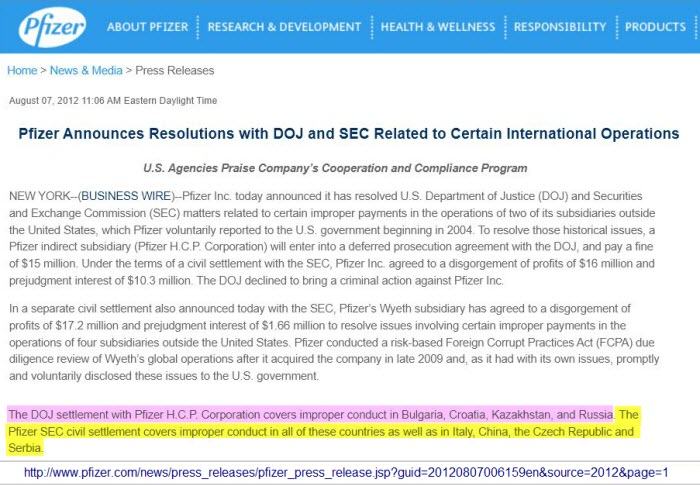 Interestingly, the link to ‘A Live-List of COVID-19 content trending on social media to strengthen our public health response.’ by Reset

(Reset is The Immunisation Coalition, which received funds from vaccine manufacturers GSK, Merck, Pfizer, Sanofi and Seqirus/CSL and Google, and is connected to Coronavax – a project led by Chris Blyth based at the Telethon Kids Institute, which is partnered with Johnson & Johnson, Roche, Pfizer, Novartis, GSK and Sanofi, and linked to The Doherty Institute, who are in collaboration with VIRGo.)

So it’s basically “Big Pharma’s Propaganda & Smear Campaign Committee for Australia, and their collated constantly up-to-date online Hit-List to attack, vilify, and cancel anyone that calls out their lies, corruption, and deception”

Their post was linked to from my Conflicts Of Interest Australia COVID Policy [Part 2] post, and no doubt my website is on their hit list, as well as everyone else who is not under the hive-mind. In fact, these guys may be the main reason the truth is “cancelled” and just one of the many forces behind the smear campaigns, gas-lighting, and propaganda/disinformation. Brought to you by “Pharma”. 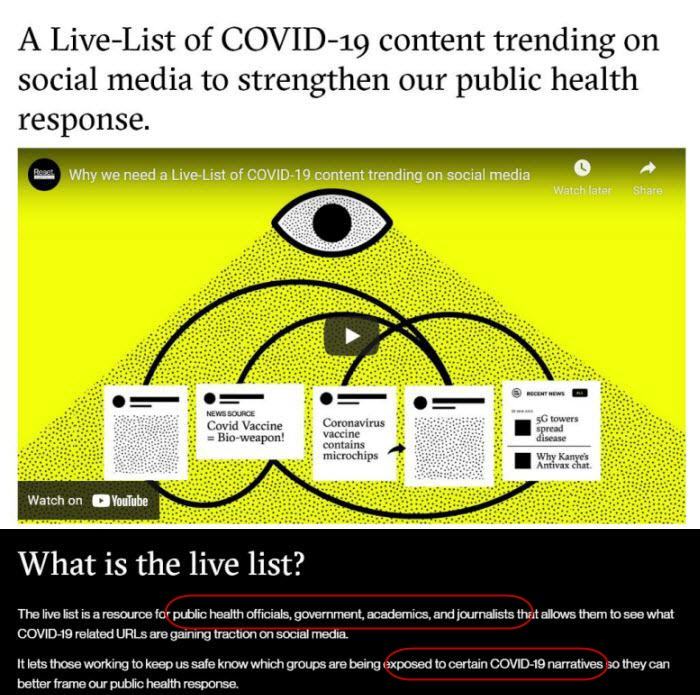 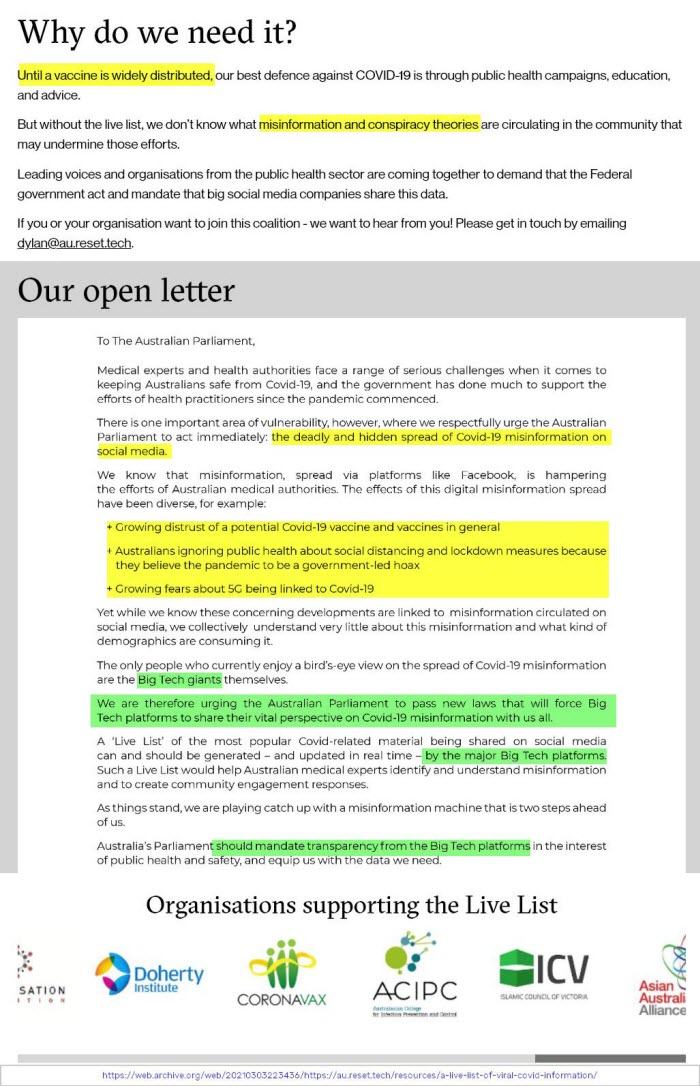 A viral video from the SA Police Association is deleted

The HuMetrix site (real-time A.I. data and analytics platform that tracks health care outcomes that is automatically created by the Department of Defense Artificial Intelligence agency “JAIC”) removed the Powerpoint Presentation that I have on my Cannot Prevent Disease Or Transmission, And Worsened Outcomes For Vaccinated Against Delta? post.

It was a damning report containing data of 5.6 Million Fully-Vaccinated members aged 65 and older (2.7M Pfizer and 2.9M Moderna) from back in September 2021, that showed:

that the vast majority of covid hospitalizations were occurring among fully-vaccinated individuals, that outcomes among the fully vaccinated were growing worse with each passing week, and that the risk of hospitalization after vaccine increases with time, doubling at 6 months post-vaccination.

This evidence was crucial to explaining to people that we’ve been warning about this from the start, and that they just change the narrative to explain-away any possible correlation to their frankenshots. 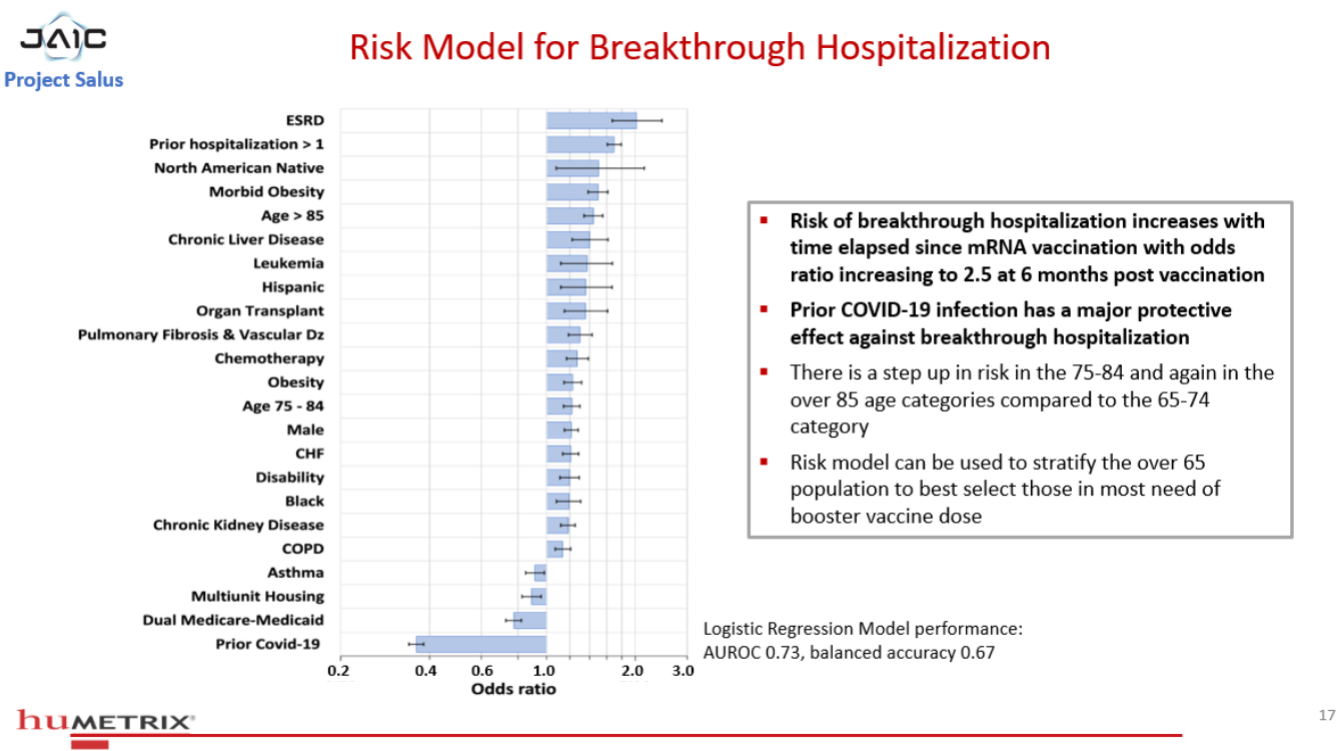 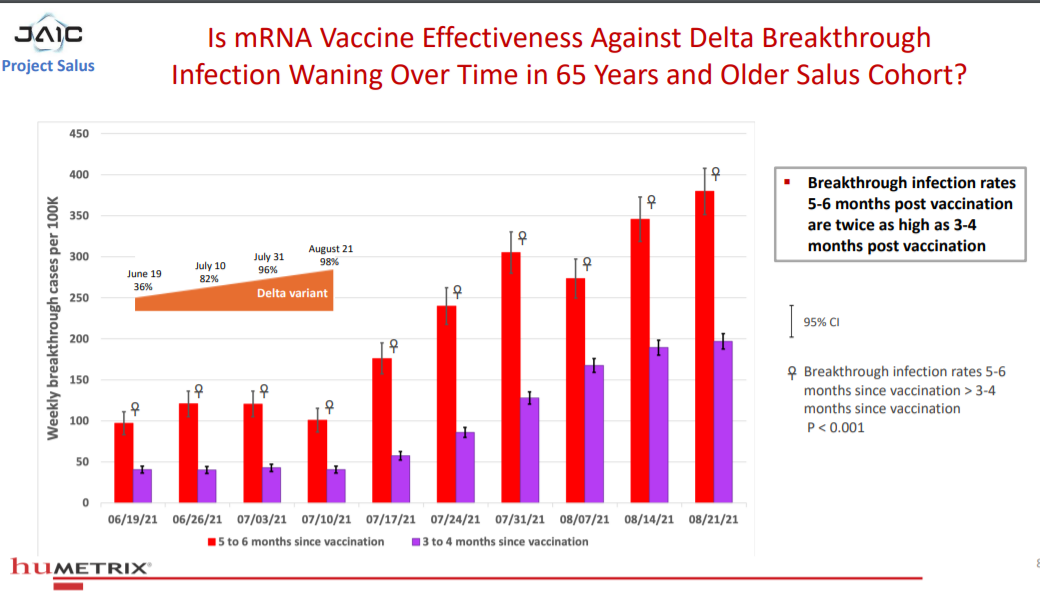 Sadly, it doesn’t look like I have a copy of the powerpoint presentation (unless I’ve renamed it), but I still have screenshots of the most damning slides (1,2,8,10,12,17) on the post and in my Mega folder.

Interestingly, the Department of Defense link (to the JOINT ARTIFICIAL INTELLIGENCE CENTER) (who is behind the HuMetrix data) on the same post, also came up broken.

Next, Pfizer deletes one of their trials from the website and re-writes history…

I had a direct link to Pfizer’s trial NCT04713553 (A PHASE 3 STUDY TO EVALUATE THE SAFETY, TOLERABILITY, AND IMMUNOGENICITY OF MULTIPLE PRODUCTION LOTS AND DOSE LEVELS OF BNT162B2 RNA-BASED COVID-19 VACCINES AGAINST COVID-19 IN HEALTHY PARTICIPANTS) on my ‘Provisional & Still In Ongoing Clinical Trial‘ post proving that the so-called-vaccine that everyone’s been gas-lit/lied to about not being in a trial, was still indeed, in an ongoing trial until May 2, 2023.

But they’ve deleted that link and when I did a search for “nct04713553” on their website, it looks like they’ve now CHANGED the date to 22nd July 2021 – literally shaving 2 YEARS off the trial & RE-WRITING HISTORY – and provided a brand new “summary” page with the results of the trial (Well, it isn’t the first time they’ve changed end-points and data in the same trial, but I cannot believe they … wait a minute, of course I believe they can get away with it because they are untouchable, and can apparently do no wrong because they have unlimited hush-money and people are way too corruptible, or under their very effective “media-spell”.) Is this the first time in history that this has ever happened in any clinical trial?

Well, I need sleep, and I have several posts in the works that I was working on before I got distracted with broken links. I might add some more to this post tomorrow or just create a new post the next time I look up my broken links because I really want to work on these other posts that I started earlier.