Takes a long time to look each one up, take notes, add links, and try and figure out who they are and what their influence is on the world.. and some I look at and think “there is not much there – how did this one get an invite?” … but when you go deeper, you see the powerful connections or powerful shares in companies i.e. for those where I started to think “wow- that’s so random, what could Bilderberg get out of this person? A few extra clicks later, and I could’ve completely missed that they are the most powerful of them all! – definitely recommend people look each one up themselves to see what I mean – my notes can’t cover everything that I read – and reading someone else’s notes probably won’t have the same impact where you start to see how they’re all interconnected. Anyway, I’ll continue digging, this post is doing my head in, but it’s an important one.

WASHINGTON, D.C. 2 JUNE 2022 – The 68th Bilderberg Meeting will take place from 2 – 5 June 2022 in Washington, D.C., USA. About 120 participants from 21 countries have confirmed their attendance. As ever, a diverse group of political leaders and experts from industry, finance, academia, labour and the media has been invited.

The key topics for discussion this year are:

Founded in 1954, the Bilderberg Meeting is an annual conference designed to foster dialogue between Europe and North America. Every year, between 120-140 political leaders and experts from industry, finance, labour, academia and the media are invited to take part in the Meeting. About two thirds of the participants come from Europe and the rest from North America; approximately a quarter from politics and government and the rest from other fields.

The Bilderberg Meeting is a forum for informal discussions about major issues. The meetings are held under the Chatham House Rule, which states that participants are free to use the information received, but neither the identity nor the affiliation of the speaker(s) nor any other participant may be revealed.

Thanks to the private nature of the Meeting, the participants take part as individuals rather than in any official capacity, and hence are not bound by the conventions of their office or by pre-agreed positions. As such, they can take time to listen, reflect and gather insights. There is no detailed agenda, no resolutions are proposed, no votes are taken and no policy statements are issued.

Both companies have a history of being the most evil pharmaceutical companies on planet earth. But these new pills – PLEASE DONT TAKE THEM OK? And stop anyone you love / anyone who will listen from taking them too. I will do a post on them soon (unfortunately I have an army of one!). Do your own research in the meantime – it might mean more when you find out for yourself what they really are.

The European Commission is the executive arm of the EU. It has 27 Commissioners – one from each member state. They are supposed not to represent the interests of their home nation but to work for the collective good of the EU. The Commissioners are not elected by the citizens of their respective countries. Instead, they are selected via a parliamentary vetting process, and approved by the European Parliament before being formally appointed by heads of EU member governments, who come together as the European Council.

The European Council is made up of heads of state or government of the member states who meet at EU summits. It has its own president.

Netherlands, H.M. the King of the (NLD)

Markarowa, Oksana (UKR), Ambassador of Ukraine to the US

The following invitees have World Economic Forum Profiles (see individuals for their connections, some are Chairs, others are Authors/Speakers, and others graduates)

Also not a complete list (I only noted it if it happened to popup when I was searching each of them).

Josh Sigurdson reports on the Bilderberg meetings happening in Washington, DC, announced the evening of the FIRST day of the meeting, giving no one time to gather, protest or confront the elites at the meeting.

From Edward Bourla, the CEO of Pfizer to Chrystia Freeland, Deputy Prime Minister of Canada, countless major players in the Great Reset are meeting to plan our demise. If you want to know what they globalists are planning, look no further than what they’re talking about at the Bilderberg meetings!

Kissinger is in attendance as per usual and the topics include war, technocracy, economy and governance as well as a “post pandemic world.”

This is only the beginning! Fight now! This is a war on humanity!

If you thought DAVOS Was Scary – WATCH THIS Next Level SH*T!!! 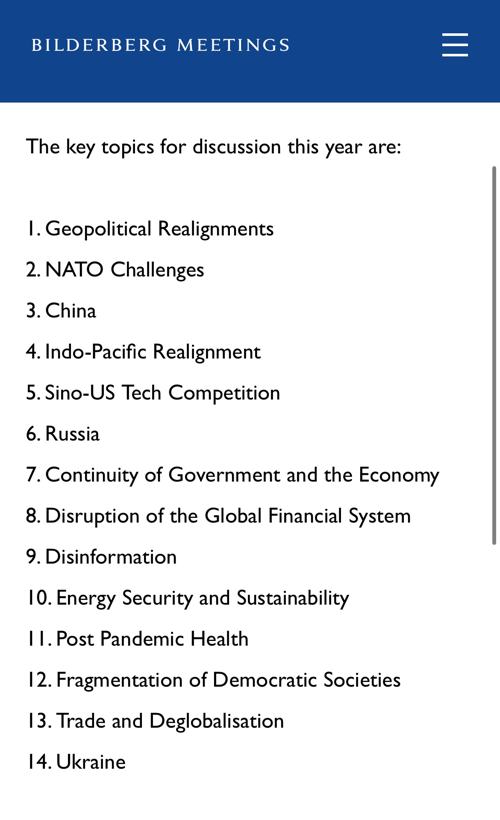 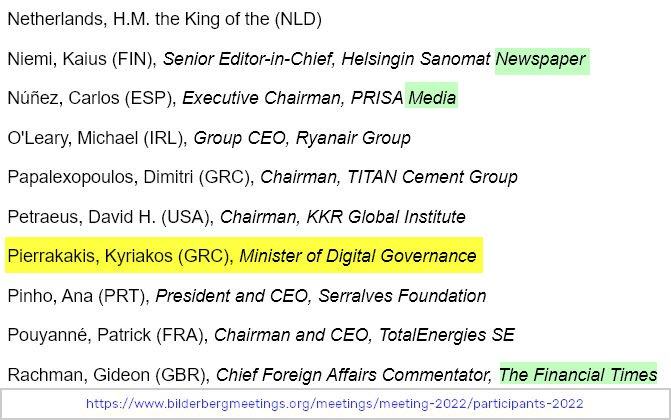 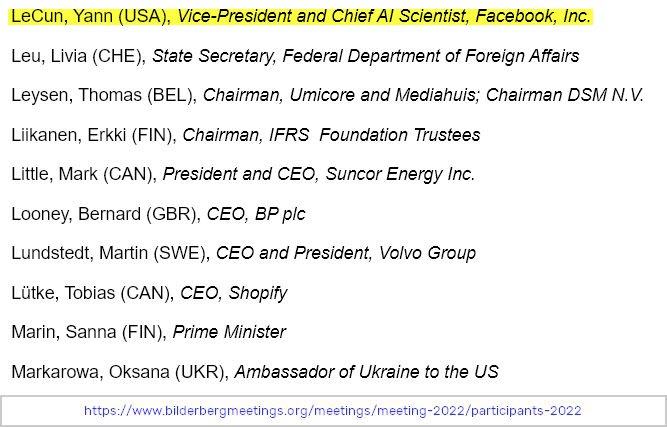 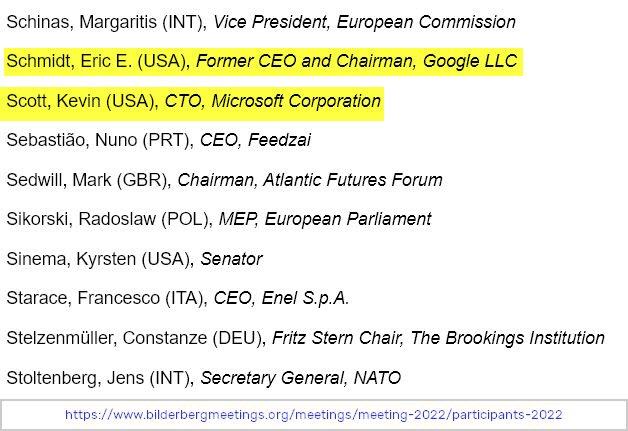 They own & control Everything'

My summary of concerns so far

I feel like we’re living in a dystopian movie most days, and sometimes I can’t work out if the globalists even know how much of a dystopia they are creating or whether they are just too close to it and that they just have no idea what it’s like to be on the receiving end of their decisions.

The censorship on the truth is already controlled (but with this group-together they’ll have complete control over all the information – education, court system, police & armies, governments, entertainment – everything – the whole internet “which will be your life” and your own data – so noone will ever get close to the truth, noone will have access to any information other than what they deem is good… for them! Whatever version of truth makes “them” look like the “good guys”. Look at the past 2 years, nothing gets through those censors – they even re-write history “on the fly” in WikiPedia and Dictionaries – changing history & definitions before our eyes and only allowing globalists-approved content to make it to the masses… and this is NOTHING compared to what they want to accomplish).

Most days I think that most of them know exactly what they are doing, along with the ones behind them who are shaping their minds, putting the right people together, implanting the ideas, and programming them into a globalists wet-dream reality who just don’t give a shit about the “unchosen” ones. We’re just another “blip” – a lab rat or toy – consumer & labour slave, of which now that they can replace humans with AI, there’s not much need for the majority of us in their version of Utopia.

X-Files pretty much sums it up in under 2 minutes:

So other than that – here’s my other first thoughts before I head to bed..

This is Pfizer CEO Albert Bourla at WEF/DAVOS in 2018 speaking of a biological chip that got approved for “compliance” – the globalists new favourite word that they’ve programmed into everyone. (DARPA & Google also created Compliance-Sensor Pills & Authentication Tattoos back in 2013)

So this year’s Bilderberg meeting combines all these Human 2.0 “Compliance” technocrat AI-surveillance companies with the largest, most corrupt pharmaceutical companies, and all sorts of other worrisome connections –

The Pfizer CEO, GlaxoSmithKline CEO, and the largest shareholder of AstraZeneca – along with the CEO of the largest supplier of computer chips in the world (ASML who supplies 90% of the lithography market)

Together with the other globalists, such as:

The CEO of OpenAI (WEF Young Global Leader graduate), the CEO of DeepMind (builds AI systems – who dialled into the SAGE meeting on Covid for some reason.. not sure why an AI CEO would need to be a part of that meeting?), Co-Founder & CEO of InflectionAI (one of which was a founding DeepMind member)

Together with BigTech & BigData Surveillance companies (who monitor secret data for governments, internet of things and the like), and Facebook’s Chief AI Scientist, Former CEO/Chairman of Google/Alphabet, Current CTO of Microsoft & Senior Advisor to the CEO of Microsoft (who is currently transforming healthcare into Digital) & the CEO of TIMWETECH (digital mobile) with those that pretty own and control the internet, digital payments and commerce.

The bankers & wealthiest investors / insurers, and a lawyer specializing in intellectual property.

All of which is worrisome – putting those heads in the same room when they are fast-tracking everyone into a MetaVerse / Digital ID slavery system – resetting the banks, destroying immune systems and downplaying how many have been murdered or mentally / physically / financially destroyed through these mandates and 2 years of lockdowns for all businesses not under their umbrella.

This is a war on humanity, and whether some of them realize it or not, what they are doing under the guise of a pandemic is inexcusable and even if it stopped right now, would take decades to repair but things are just getting started and about to ramp up and having all these people in the same meeting is most definitely not rainbows & butterflies of the wonderful utopia they are promising — they already own everything and they want us all to own nothing and be completely enslaved by them.

People brainwashed into their wargame for humanity (sold to us as “Utopia“) forget that these guys are not going to be handing over their fortunes to become “one of us”, “everyone equal and you will be happy” – NO. They will continue to own and control us just as they always have, and they will continue to own and control the governments just as they always have, but with far more power to make the monkeys dance on command and far more power over governments, information, education, food, air, water, housing, supplies – because they own the infrastructure, they are the architects – there is no “up-side” for “the rest of us” – that is… brutally honestly… anyone NOT in their club is fucked…. unless we unite & stand up.

The most detailed/referenced posts I have so far on the NWO/Bilderberg are:

Scientists inform us that you build a new body every eleven months; so you are really only eleven months old from a physical standpoint.

If you build defects back into your body by thoughts of fear, anger, jealousy, and ill will, you have no one to blame but yourself.