I am so grateful to a friend who sent the latest video of the Truthstream Media channel which I’m currently binge-watching. It’s a channel from Aaron & Melissa Dykes who describe themselves as “researchers by day, filmmakers by night“.

They are actually fantastic at explaining what I’ve been trying to get out to everyone—that the media and the internet have been used as weapons since the beginning. I absolutely highly recommend this channel to all—it’s so important for understanding the world and how we got here.

I haven’t watched them all but I am binge-watching their videos now about the mainstream media, hypnosis-brainwashing/psychological operations on humanity, and propaganda and am really impressed with their research.

How wonderful it must be to be able to do all these deep-diving with your family/loved-ones instead of being a solo-geek like me lol. I also love how they show you where they got the information (this is one of my pet hates when watching any of the “truth” videos – to then have to spend hours trying to locate the source to verify), so props to these guys for also showing the source (although I wish they’d include the resources in the description or on their site).

The Media Experimented with Television Hypnosis Back in 1946

The Media Experimented with Television Hypnosis Back in 1946

Where Did the Rest of the Internet Go?

Where Did the Rest of the Internet Go?

“The past was erased, the erasure was forgotten, the lie became the truth.” ― George Orwell (1984)

We’ll know our disinformation program is complete when everything the American public believes is false.” ― William J. Casey, CIA Director (1981) 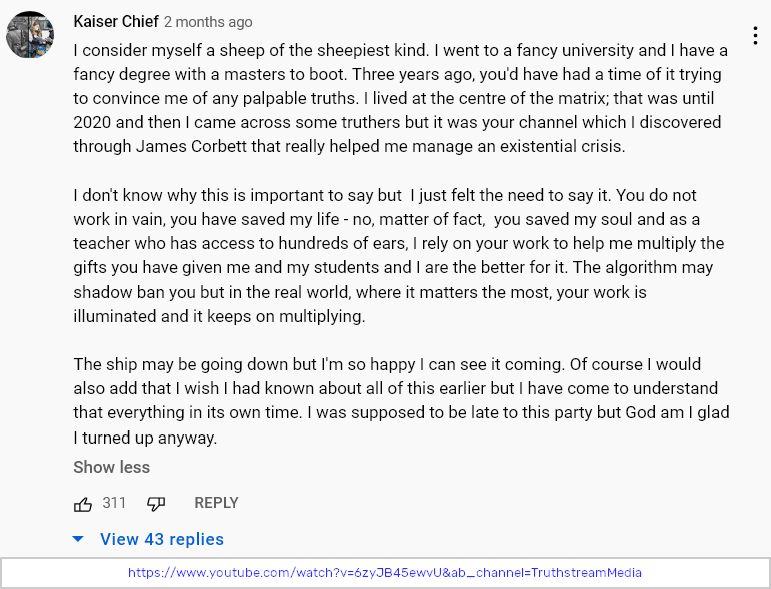 We Were Warned about Computer Driven Self-Fulfilling Prophecies

We Were Warned about Computer Driven Self-Fulfilling Prophecies

9 Feb 2022 Sixty years ago, a panel of some of the time’s most lauded scientists were having a discussion one day… and now a lot of what they talked about is no longer science fiction.

Here’s some Sentient World Simulation references I found that relate to this video:

How can one of us be Happy if all the Other One’s are Sad?