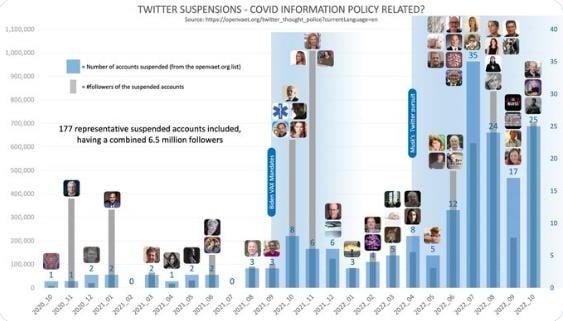 MSM, Big Tech are censoring doctors who have the courage to challenge the COVID narrative

As noted by Dr. Robert Malone, himself an outspoken critic of COVID-19 “orthodoxy,” the publication of this article is particularly significant as Minerva is released by “mainstream academic publisher” Springer, a “Q1 journal in its subfield” of sociology with a “decent” research impact factor in the social sciences — meaning that it enjoys a strong reputation within its academic field. (02)

Malone said the article also is notable because one of its authors, Yaffa Shir-Raz, “broke the story with video from the internal meeting at the Israeli ministry of health” on “how they hid many of the key findings regarding the Pfizer mRNA vaccine adverse effects.”(03)

Study: Censorship and Suppression of Covid-19 Heterodoxy: Tactics and Counter-Tactics

A study has confirmed that the mainstream media (MSM) and Big Tech are censoring doctors who have the courage to challenge the Wuhan coronavirus (COVID-19) narrative.

The paper published Nov. 2 in Minerva was written by a team of researchers from universities in Israel and Australia. It detailed the experiences of medical professionals who spoke out against public health mandates to curb COVID-19. While it revealed the censorship the aforementioned medical professionals faced, the study also elaborated on how they responded to the suppression.

“The emergence of COVID-19 has led to numerous controversies over COVID-related knowledge and policy,” they wrote. It also gave rise to a “perceived threat from doctors and scientists who challenge the official position of governmental and intergovernmental health authorities” – with the study authors branding this “official position” as an “orthodoxy.”

They added that supporters of the orthodoxy “have moved to censor those who promote dissenting views.”

“Our findings point to the central role played by media organizations, and especially by information technology companies, in an attempt to stifle debate over COVID-19 policy and measures.”

According to the researchers, this was accomplished through “widespread use of censorship and tactics of suppression that damaged the reputations and careers of dissenting doctors and scientists, regardless of their academic or medical status and their stature prior to expressing a contrary position.”

Some of the respondents who spoke to the study authors recounted that the MSM, “which until then had seen them as desirable interviewees, stopped interviewing them and accepting opinion pieces from them.” These same media outlets disparaged them as “anti-vaxxers,” “COVID deniers,” “dis- and mis-information spreaders” and/or “conspiracy theorists.” Aside from these, “fact checkers” and other doctors were used to publicly undermine the skeptic doctors and their associates.

They also “reported being censored on social media” through the removal of their content, if not their entire accounts. The removals would be “accompanied by a notice claiming they had violated the ‘community rules.’”

Because of this, the authors stated: “In place of open and fair discussion, censorship and suppression of scientific dissent has deleterious and far-reaching implications for medicine, science and public health.”

While the study detailed the experiences of the professionals who faced censorship for going against the grain, it also expounded on their responses to the suppression.

“Their initial reaction to the attacks and censorship were shock and surprise, since for the first time in their lives, they felt excluded, … attacked by the media and sometimes by their employers … and/or disparaged,” the study stated.

“Yet despite the censorship; the personal attacks and defamation; the dismissals; the damage to reputations and the economic price – all respondents nevertheless stated that none of it deterred them, and they decided to fight back using various counter-tactics.”

The authors mentioned the five strategies used by medical professionals to combat censorship:

Exposure: They sought to make people aware of the suppressed information and the censorship conducted by Big Tech firms. Even if the tech companies deleted their accounts, they simply made new ones and carried on or moved to another channel or platform.

Validation: Aside from their credentials, the suppressed doctors insisted on using evidence-based information and reliable data to present their arguments. They portrayed themselves as warriors who fight against medical misinformation and medical censorship.

Interpretation: They framed the censorship efforts aimed at them as attempts to present valid information to interested readers. Given that the MSM and Big Tech are working hard to suppress what the doctors have to say, people would naturally become more curious as to what the messages are.

Redirection: The censored doctors also coordinated a public response by seeking to mobilize their supporters. They also turned to their fellow scientists and medical professionals to create alliances and coordination networks, as in the cases of America’s Frontline Doctors and the Front Line COVID-19 Critical Care Alliance.

Resistance: The suppressed medical professionals did not let the initial shock get to them. According to the study authors, the doctors refused to succumb and yield to the attacks – choosing instead to resist and fight back.