With the stroke of a pen, the U.S. government rewrote the formula for gasoline and “accidentally?” contaminated the drinking water of America and other countries.

“If I wanted to to be sure that I poisoned as many as possible, I’d put something in gasoline… it’s something we’re all exposed to […]”

I came across this old 60mins video whilst researching Prof. Victor Petrik (post in progress) in regards to graphene, and this was in his playlist, and I was absolutely horrified all the way through watching it. I can’t believe this… Democide…

Of course, I’m aware of how evil the psychopaths in charge of the world’s policies are, but I can’t believe how outwardly and remarkably incompetent these agencies, who we think are “supposed to protect us,” are—on display for all to see! (Deliberately?) Although it’s not like they haven’t made it very obvious the past couple of years about their tendencies to kill us with globalist-controlled government policies under the cover of “science-fiction”, it’s still remarkable to see a video from over 20 years ago displaying the same atrocities.

We must use these past disclosures as a reminder that there is a very real and present danger and not to drop the ball on helping people see what’s going on in the world. The evidence is insurmountable on our side, and the planned one-world government, / united nations / BIS policies can easily and systematically murder us all and/or quite literally just continue this war on humanity, using inconspicuous things that you don’t even think could be used as weapons. One very clever policy-change under the guise of “climate-hysteria“, and a signature…

An examination of the widespread pollution of groundwater caused by the reformulated gasoline additive MTBE (butyl methyl ether), especially in California. Asks the questions: Why was this chemical not fully tested before use? Why is it still being used?, What are the health consequences of ingesting it through drinking water?

This is incredulous. Just crazy.

Even though the Environmental Protection Agency has known since the late 1980s that MTBE was getting into drinking water and that there were possible adverse health effects, the agency has done almost nothing. Right now, the only standard for MTBE is a non-binding advisory that the agency sent out that sets a limit of 20 to 40 parts per billion in drinking water, and that’s only because that’s the level at which humans won’t be able to detect the smell and taste, not based on safety studies. (02)

Steve Kroft (Investigative Journalist, back when they used to do such a thing as “investigate” rather than just Puppet-report, I guess… or it could be another “we told you we were evil – we told you it was poison”… another “disclosure kind of thing”; that old chestnut – that “if you continue to drink the poison water–after they tell you it’s poison; then they have no karmic retribution for your own “choice” to keep poisoning ‘yourself’ and anything that happens to you as a result“)

The United States Environmental Protection Agency (EPA) has concluded that the available data are inadequate to quantify the health risks of MTBE at low exposure levels in drinking water, but that the data support the conclusion that MTBE is a potential human carcinogen at high doses.

(To the assistant administrator of the EPA):

Did the EPA require local municipalities to test groundwater for the presence of MTBE?

“We never required them to do the testing specifically.

Are there any requirements to test now?

And when would that begin?

“We would hope by next year”

“That is something we should have done earlier. It should have been done when the alarm bells were going off earlier” 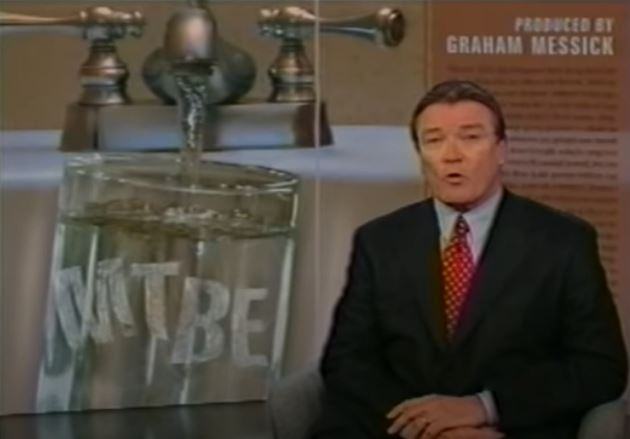 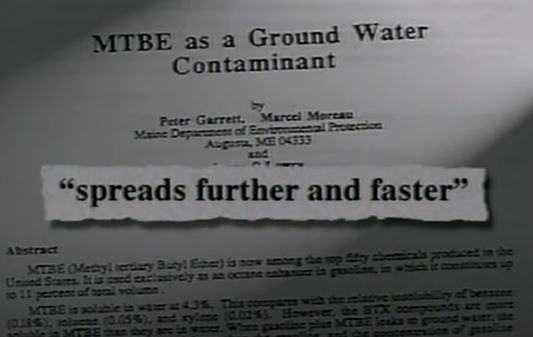 This video was made in 2000. It’s been 22 years since that 60 Minutes report, and 42 YEARS since it was first acknowledged that it was contaminating the drinking water.

Has all production of MTBE been stopped? Is everything fine now? Can you “trust the experts”?

Well, I spent a few hours having a look.

The production in the US has lessened… (but remember, it only takes “one cup of MTBE to make five million gallons of water undrinkable.”) (Timestamp 5:34) (That’s 189,270,589 litres Aussies)

MTBE is still being produced and put into “the fuel that they say is “mostly” exported to other countries”—are we believing these criminals? And even if you can believe it, why is it okay to contaminate other parts of the world? (03)

(hmm.. that’s a lot of barrels for something that’s almost exclusively used for the petroleum industry)

No safety studies were done to determine risks to humans, wildlife, sea life, livestock, or agriculture, and other than mice studies, all their own toxicity testing was covered up. Hmm, just like Atrazine, hey? Same players, different chemical-coverup.

Mice studies were done all the way through (even last year, in 2022), showing cancer and other health risks. You’ll get the odd paper here and there that says that’s not true, but there were over 1000 papers on MTBE (which may not be about the petroleum industry) and over 100 when I did a search for “MTBE Cancer,” as well as books about it. Please keep in mind that I am unable to search medical journals prior to 1990. (Does anyone know where I can find old journal papers?) (Perhaps I should’ve tried Google Scholar, but I’m done with this post now.) Anyway, it’s probably to their advantage that I can’t do pre-1990 searches because I’m sure there are plenty. I found about three studies in the past few years that attempted to disprove all of the other studies; my guess is that if I looked up any of those authors, I’d find the conflicting connection, just as I found during “COVID-lala-land”.

According to this white paper published in March 2005, the gasoline industry had already been marketing MTBE-laden gasoline for more than a decade. (Prior to any reformulated gasoline requirement to enhance octane ratings and to demonstrate to consumers that the industry could manufacture “environmentally friendly gasoline,”) And that the industry went to great lengths to keep the chemical in gasoline, lobbying the EPA for softer underground storage tank regulations while failing to report to the EPA the studies they’d already done showing troubling results of its own testing on MTBE’s toxicity. (06)

Not tonight, but one day I’m going to look into Ethanol too; I trust nothing anymore. I mean, shit, we still have fluoride, a known neurotoxin, in our drinking water, which they somehow convinced the masses is a “good thing for their teeth” (well, as long as they don’t have a brain, or care about the rest of their health, I guess you can be dumb enough to believe the idiocy that it somehow saves you on dental bills). (19)

I’m having dejavu palpitations; this isn’t funny. I can’t even imagine how many people are full of health problems that they don’t even realize are due to the daily water they are currently cooking with, drinking from, and bathing in—it’s probably all over the United States from when it already contaminated everything, and in every country they currently export their fuel to. The Art of War: Some weapons are just too sneaky to be seen. We’re in a toxic, chemical shitstorm because of these psychopath corporations and whoever runs them.

Direct Scrape from YouTube subtitles file (no, I’m not going to pretty-it-up for ease of reading, I don’t have time, but it at least allows for a word-search, even though the auto-transcription sucks)

Always focus on that which raises you to your highest vibration. We should always be following our greatest joy.