Graphene has endless potential applications, in almost every industry (like electronics, medicine, aviation and much more – food, clothes, air, water, buildings, etc.). Industry and scientists alike are super-excited about this, it’s a “Game-Changer” apparently. (01)

Graphene oxide is an oxidized form of graphene, laced with oxygen-containing group, and is used as a cheaper version of graphene: (02)

The following indicate that Graphene oxide exposure causes the same symptoms as COVID-19. Which is an interesting coincidence…

(Pretty masterful how they weaponized symptoms that everyone on the planet gets from time to time, sometimes you gotta look at this list and sit back in your chair and applaud the bad guys for their intelligence)

First, this article in Phys (2018) briefly explains how Graphene oxide is detected in the body by specialized cells of the immune system (and that it’s a million times thinner than a human hair — relevant when you see what the fact-checkers are trying to get the normies to believe.)

A study by researchers at Karolinska Institutet, the University of Manchester and Chalmers University of Technology published in CHEM shows that our immune system handles graphene oxide in a manner similar to pathogens, paving the way for safer biomedical applications of this two-dimensional material.

Graphene is the thinnest material known to man, a million times thinner than a human hair. Graphene oxide (GO), in turn, is an atomically thin material consisting only of carbon and oxygen atoms. GO is currently being considered for numerous uses, including drug delivery and other medical applications. However, it is of critical importance to understand how these materials interact with the body.

The researchers found that GO causes specific changes in the lipid composition of the cell membrane of neutrophils leading to the release of NETs (Neutrophil Extracellular Traps). They could also show that antioxidant treatment reversed this process. In a companion study published in Nanoscale, it was shown that GO is degraded in NETs, much like bacteria and other pathogens.

Taken together, these studies show that graphene oxide can be trapped and degraded in NETs just like pathogens.

External links to the studies & article in ‘Chem’:

Second, according to the Spanish researchers, Graphene Oxide Causes Loss of Taste, Smell, “Covid” Symptoms and can account for all the severe-symptoms that some experience:

(Note: I haven’t gone through this list to reference each claim individually yet, but I’ve started several posts collecting all the research on Graphene, which I need to collate/summarize into one post whenever I have time, and the third point below references most of them. (10)

Third, a large study covers most of the above, showing the toxicity of Graphene Oxide Nanoparticles and how it effects us. (11)

If I were to summarize the symptoms and damage it does, I would say: “it’s toxic to everything!”. 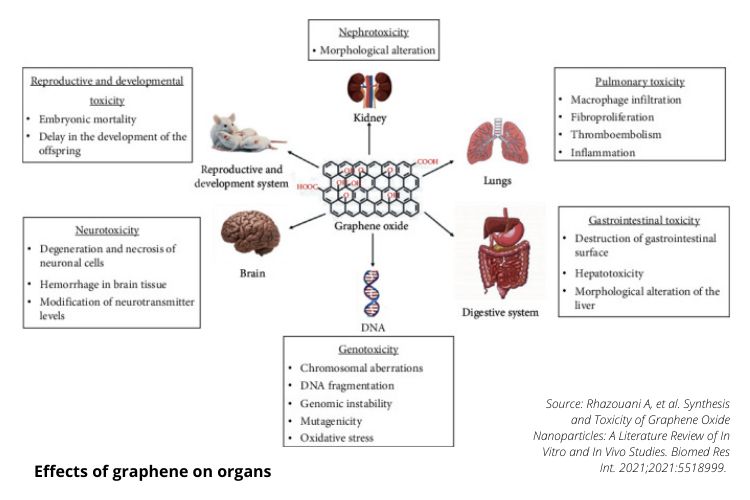 The post also speculates on possible antidotes or things we might be able to do to combat it.

Fourth, several of the lab-analysis (currently categorizing and uploading) believe COVID-19 itself is caused by Chemical & Radiation Poisoning because of Graphene (either Reduced Graphene Oxide or Graphene Hydroxide).

Fifth, there is also a very detailed analysis from Dr Robert Young that looks interesting that I will review when I’ve finished the other graphene posts that I still have open.

Sixth, can’t forget to mention that the magnetic phenomenon is real, and graphene is in literally everything these days! Since it’s already in water, food, air, clothing, buildings, medications, you name it. This post also talks about what has been used by the Spanish researchers to “demagnetize” and not surprisingly – it’s the same things used for those with “covid” symptoms.

Look for solutions, not excuses. Make a list of all the things you’ve been putting off that would benefit you both personally and professionally. What could you do today, that you want to postpone until tomorrow?