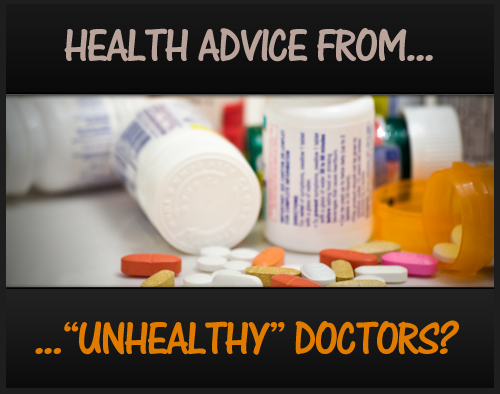 If doctors can’t even take care of their own health, why would you put your life in their hands?

Posted this yesterday to Facebook after a conversation I had that erked me about the health industry and unhealthy doctors in general:

What are your thoughts on taking health advice from ‘unhealthy’ doctors? I just got made to feel like there is something wrong with me, “that I should move to Nimbin” for making a comment that if the doctors themselves are looking half-dead and have life-threatening medical issues, that they are the last people you should be getting health advice from. I only asked if the doctor looked healthy or not after it was mentioned that the doctor had the same illness as her. I actually feel like that isn’t a ‘warped’ question at all – am I delusional? Hmm, why am I asking Facebook this question, when most of the population reading this are probably part of the new ‘normal’ that is still relying on doctors for their health. (woah, where is this judgement coming from?)

I only know from my own experience that I would be dead by now if I had’ve kept relying on doctors for a ‘magic pill’ to ‘save me’. My lifestyle was the problem for my entire life, the doctors weren’t ever trying to ‘cure’ me, they didn’t actually believe that it was possible – so how could they? Their job? Just ‘maintain’ my ‘comfort’. And my most recent interactions with doctors were the even bigger wake-up call I needed. The first doctor that had diagnosed me with COPD had a heart-attack on Friday and was back at work on the Monday. What kind of health advice can I get from such a person? He didn’t offer any advice anyway, but I know that I couldn’t learn anything from him – he looks nearly-dead, has an ‘angry-persona’, and even a heart-attack didn’t get him to slow-down and start looking after himself, making money seems more important to him than staying alive. I found a new doctor.. who proceeded to prescribe drugs to me after less than a 10 min chat with nothing more to go on than what I was able to describe quickly as my symptoms & diagnosis – those drugs made me 80% worse – I would not of been able to continue working on those ‘drugs’.

Long story short, I have regained my health with a lifestyle change – diet, toxin-removal & mindset, I’m on the healthy path now only because I started taking responsibility instead of staying the victim, and I only need a ‘doctor’ when some company needs some stupid legal ‘paperwork’ from these people we are supposed to treat like Gods. Although I wouldn’t be opposed to seeing a doctor if I had a car accident or similar but definitely won’t be knocking on their doors for anything that I “did to myself” through wrong living.

Why people think they can continue to destroy themselves and take a magic little pill to stay alive is kinda beyond me… but it’s the common thinking thesedays, I look around work and shopping centres and even facebook and you can play a game called “spot the healthy” – which people look like a glowing picture of health, not what should be the other way around: it’s the new “normal” to have some kind of health issue, and I’m the ‘weird’ one with the flawed thinking that we have the power to change our own health and the majority are the ‘normal’ ones, with 85% of people in the western world on some kind of regular medication, walking around half-dead, waiting for the next magic pill to save them.

I listened to something the other week where the patient with the “you have 3 months to live, get your papers in order” diagnosis, out-lived their apparently “all-mighty, all-knowing, God-like, psychic” doctors by decades by taking control and responsibility for their own health… by doing the obvious: stopping what was making them sick.

Anyway.. .. maybe I ‘should’ move to Nimbin. Sorry, the ‘full moon’ must brings out the ‘full mean’ in me. Having a different opinion than the majority can do my head in sometimes. I don’t want to be ‘normal’ if that’s the thinking that is out there. I also don’t want to live with these internal ‘judgements’ either, that can’t be healthy.. something I’ll work on. I don’t feel like I’m judgemental most of the time, but I do notice that every now and then I get over-defensive when I should just accept that others are where they are at, and that it’s ok that not everyone agrees with me, that once-upon-a-time, I thought the same way.

When you lift your world, you also lift the world for everyone you will ever meet and those you may never meet.