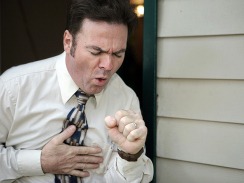 In Traditional Chinese Medicine (TCM), these herbs are generally grouped together and are known collectively as herbs that alleviate phlegm, coughs, and asthma (Zhang, 1988)

Phlegm refers to the pathological accumulation of thick fluid in the respiratory and digestive tracts, as well as in muscles and other body tissues. Phlegm in TCM is the substance expectorated from the lungs and this expectoration is a physiological reflex action. Phlegm in the lungs produces a cough and abundant expectorations. TCM also recognizes phlegm in other parts of the body. eg in the heart is causes unconsciousness and a manic or depressive psychosis. in the stomach, nausea, vomiting, and poor digestion. upper body, it causes dizziness and nausea. meridians, it causes scrofula, goiter, and subcutaneous modules (Chen and Chen, 1992)

There are 2 kinds of phlegm: Cold & Heat.
Cold phlegm is marked by the expectoration of watery and thin phlegm, profuse phlegm from the lungs or a cough accompanied with nausea and vomiting when an excessive amount of phlegm accumulates in the stomach. Heat phlegm is marked by the expectoration of yellow, thick phlegm, with or without the symptoms of fever, and a yellow, coated tongue (Dong et al., 1998)

Coughing can be caused by an attack of external (Wind-Cold) pathogens on the lungs or it can be the result of a functional imbalance of the internal organs.

Specific expectorants or herbs are used for resolving either Cold phlegm or Heat phlegm: