You can’t say it’s not interesting. No wonder they had to dedicate a shit-load of money to try and ridicule the conspiracy theories. Have you seen this?

“Welcome to the Illuminati Headquarters, I Mean, Denver International Airport!”

Denver International Airport installs a brand new animatronic talking gargoyle statue that is making fun of the “conspiracy theories” about the airport. (02)

“The tunnels beneath DEN have been a backdrop of many conspiracies. In this virtual tour, we will debunk the myths and get a real look at the use of the tunnels.” (03)

Artist who created “Mustang” was crushed to death while making it:

“Mustang” is a 32-foot cast-fiberglass sculpture by Luis Jiménez, which can be viewed while driving to and from Denver International Airport. Jiménez’ characteristic style references the grandeur of the Mexican muralists, the energy of the Southwest and the bright colors he experienced as a youth in his father’s sign-making company. This time lapse shows “Mustang” standing strong amidst summer storm clouds.”

(Details) Covid-World Masks Painting is NOT at Denver

Someone added a caption to a mask painting and circulated in on social media saying it was at the Denver Airport since 1994. (09) (10) But it was painted in February 2020 by Filipino artist: Christian Joy Trinidad. (11) It was however, this image that first made me aware of Denver Airport-so even though people who deliberately spread false information suck and I wish people would source all their findings before spreading anything, I wouldn’t have looked any of this up in the first place, if I hadn’t of seen that caption. 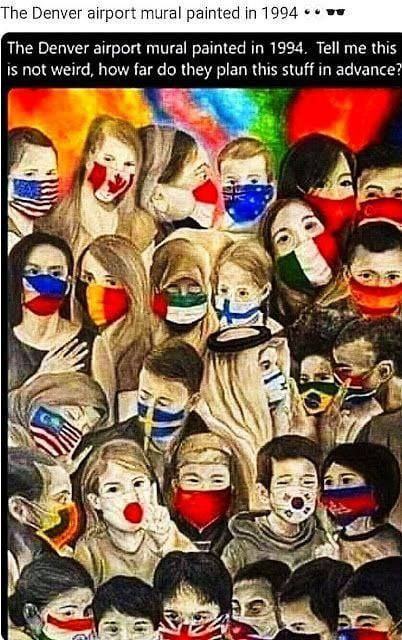 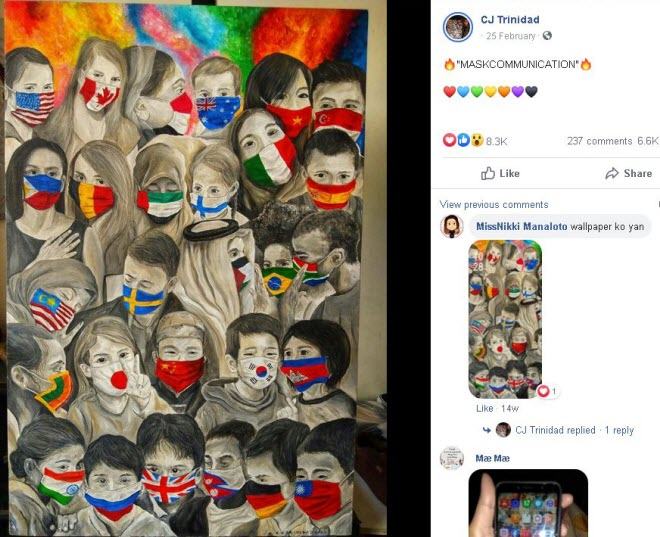 The artist showing the work in progress on his instagram account and a photo of the artist next to his finished art, 2020: (12) 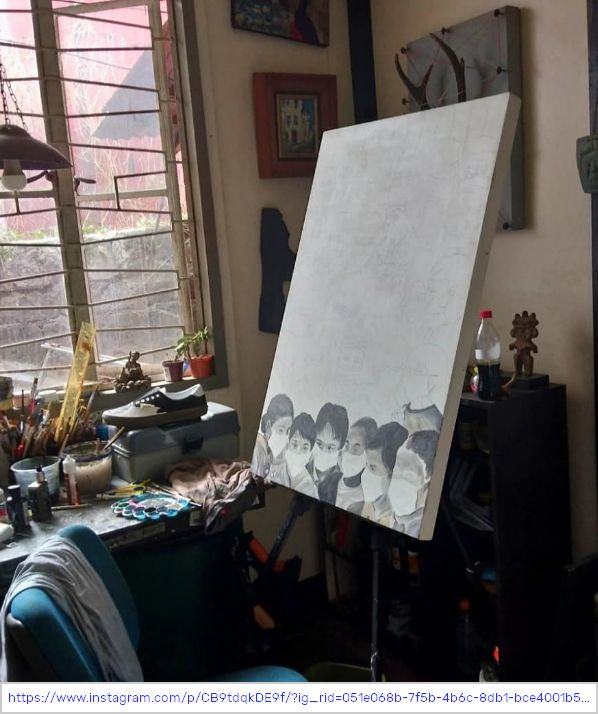 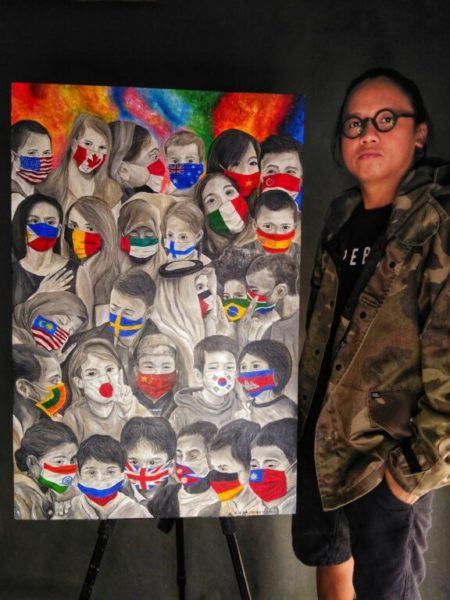 The Art inside Denver International Airport

The Denver Airport Murals (This one is the most detailed)

(Mural) 'In Peace and Harmony with Nature'

“In Peace and Harmony with Nature“

There are 2 main murals, which stretch over 4 walls painted by Leo Tanguma (16) which are supposed to represent peace, harmony, and nature. (17)

I think it’s more like a representation of how destructive humans are and how wonderful the world “could” be if we were more conscious and in tune with nature.

But many others suggest these paintings have a more nefarious warning/prediction. And since we now know they are killing us, I’m not going to knock that it can represent this interpretation (even though I don’t think this artist was predicting the NWO-just that, I think the NWO chose these murals because, in “their” deluded psychopathic minds, they have openly stated that they want fewer people for a more sustainable world — Forgetting to mention that they are the ones instigating the total destruction, genocide, and total control over all the remaining human slaves in the process).

The first part of the mural seems to attempt to show the destruction of the world, represented by a forest fire with billowing black smoke. In the far background, you can see a city of skyscrapers, implying (to me) that “humans” are doing this—modern life is causing this destruction and death.

It shows three dead women laying in coffins: an African, a Native American, and a young Jewish girl. There is a little girl carrying a Mayan tablet or a torn up map, and a little boy holding a squirrel in a protective stance, looking worried. 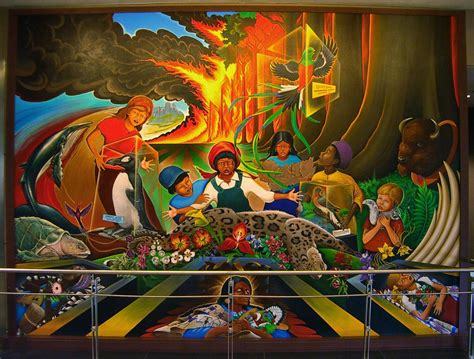 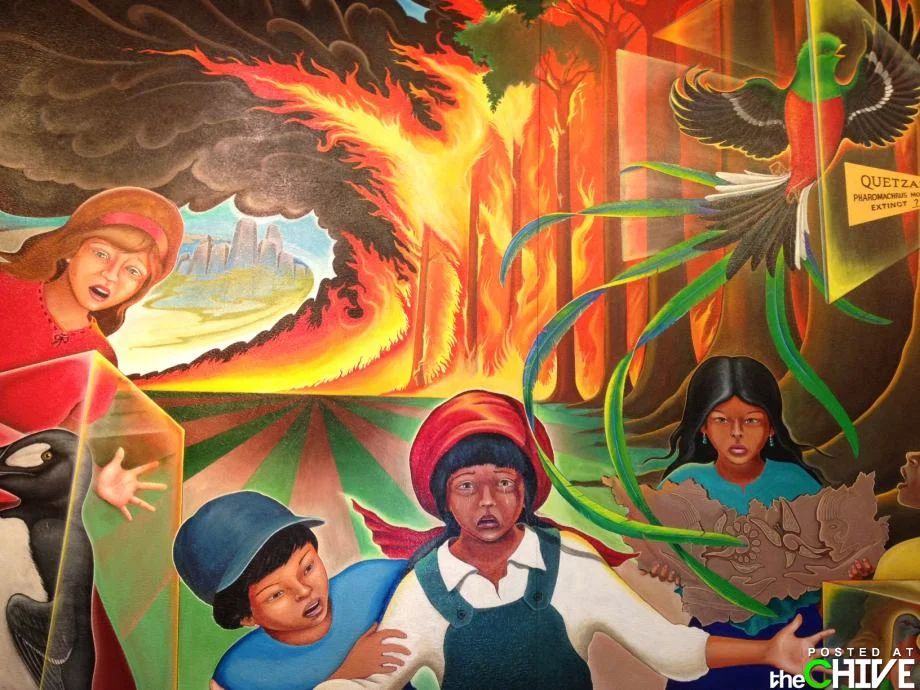 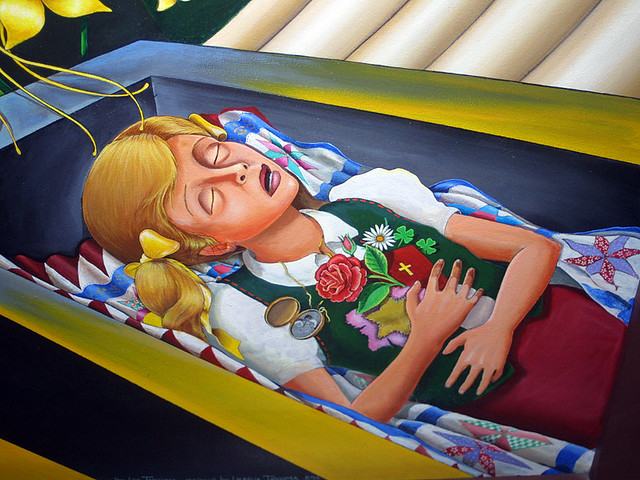 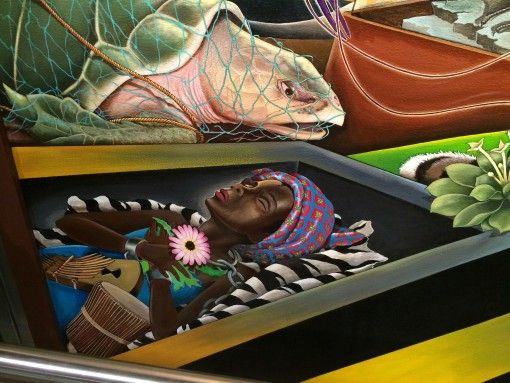 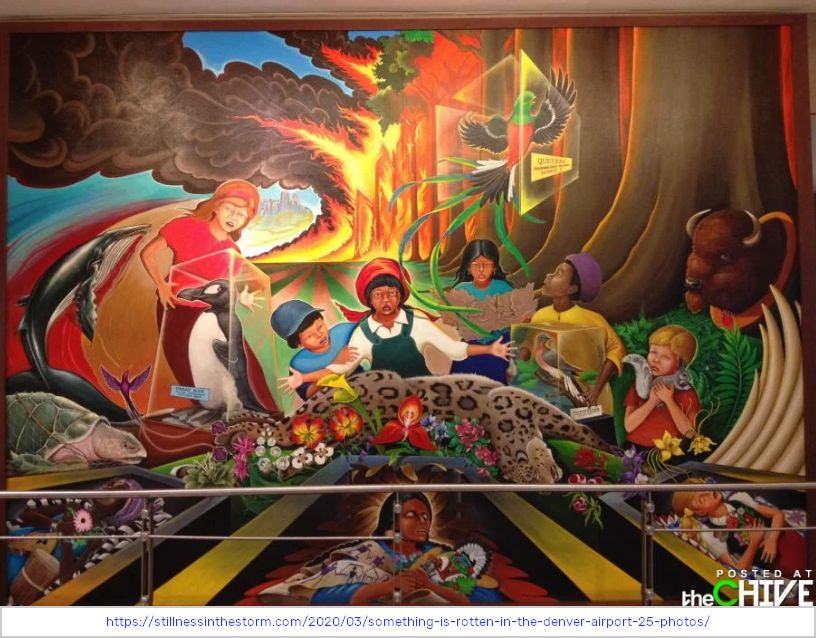 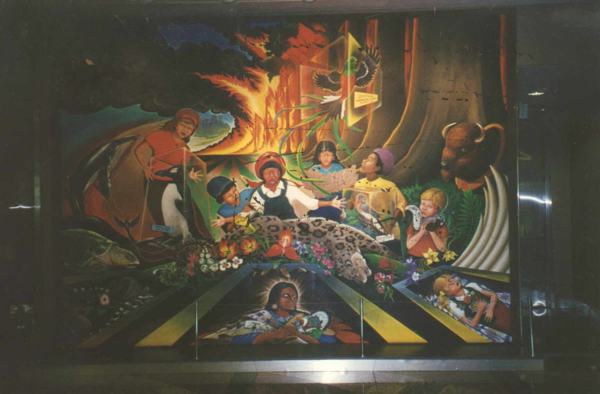 The next part of the mural has a Jesus-like figure in the middle, with his hands around the energy of a plant. All of the people are gathering around the plant with happy expressions. It looks as though everyone is worshipping or celebrating the plant / nature / life. There is a white-light aura shining out of the colourful plant, and you can see the roots and the leaves are colourful. Everyone, young and old, is happy, free, smiling, and full of life, from all cultures and traditions around the world. I think this image is “what life could look like if humanity were without the elite psychopaths dividing us lol”-or “what life could look like for humanity if we celebrated nature instead of the artificial, superficial, media-delusion that has entrapped us”. 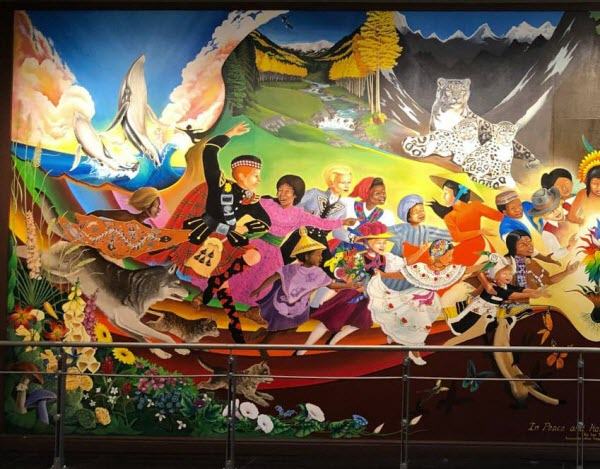 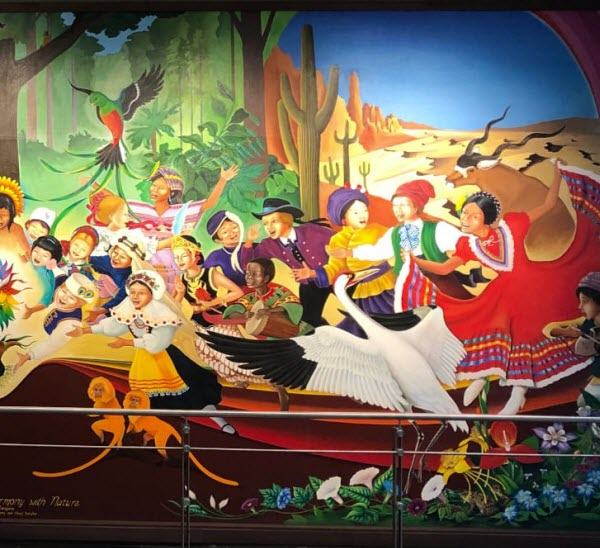 (Mural) 'Children of the World Dream of Peace'

“Children of the World Dream of Peace“

The left-side of the mural shows all the people of the world have wrapped-up their swords. It looks like there is music and they are all living in peace and harmony. It looks like they are admiring a bent, unsharpened sword (and looks like they are the ones bending it out of shape – is that an anvil beneath it?). All the countries laying down their weapons to live in peace. Being that the mural is named “Children of the World Dream of Peace” – it’s likely to be more representative that no-one wants war. Children don’t want war. No country wants war. Everyone wants to live in peace.

(Noone except the elite want war).

There is a gas-masked soldier (or perhaps it’s just broken armour?) at the bottom, and there are two doves perched on the weapon. To me this implies the war has ended, the war is over – that people live in harmony without war. Or that there has been enough war already – when are we going to say no to participating in bankers-wars, in elite-corporations wars, in the control-wars?

People in countries can get along just fine excepting the elite funding the media to “make people support wars”, to mind-control people into “us & them” divisions and lies – all to benefit them.

There is a cracked, metal sign that says “War, Violence, Hate” on the bottom right:. 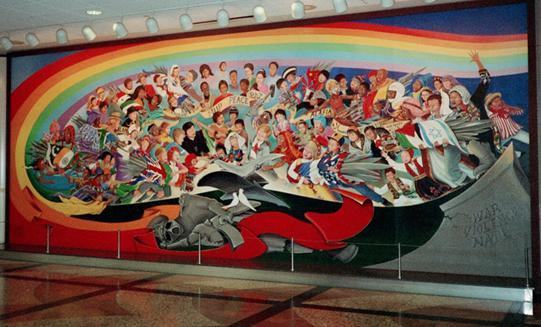 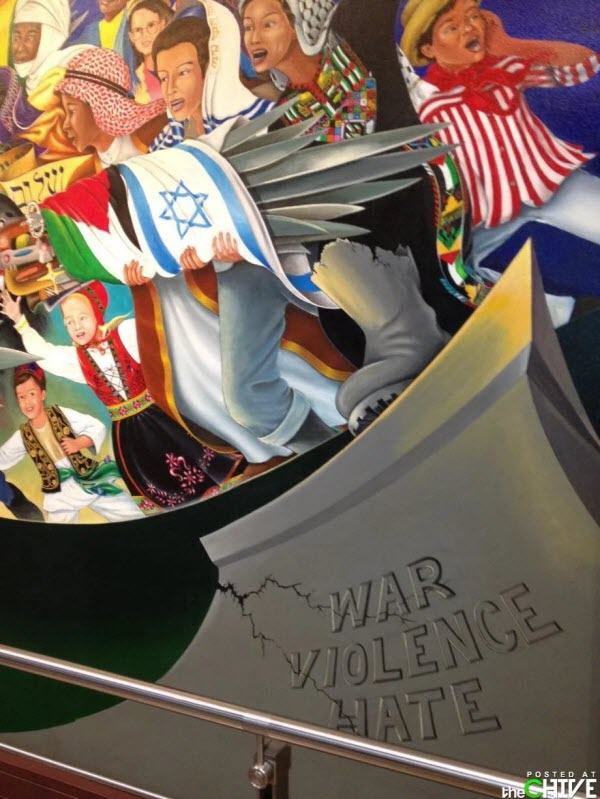 The second part of the mural is located on the right-hand-side, not the left, which implies this section of the story comes “after” the first (or that it’s a Peace-time vs Wartime comparison).

The main figure is a huge, scary, and inhuman-like military figure wearing a gasmask and holding a machine gun and sword.

The sword is stabbing a dove—the symbol of peace and harmony—implying that war destroys peace. The rainbow in the sky has turned to a grey, poisonous gas. The buildings have turned to rubble, and the people live in poverty. The people below him are sick, dying, and sleep on bricks. The “gas” looks like it’s “infecting” one of them. There is also a line of weeping women and men holding their dead infants & children. Everyone and everything is sad and grey. 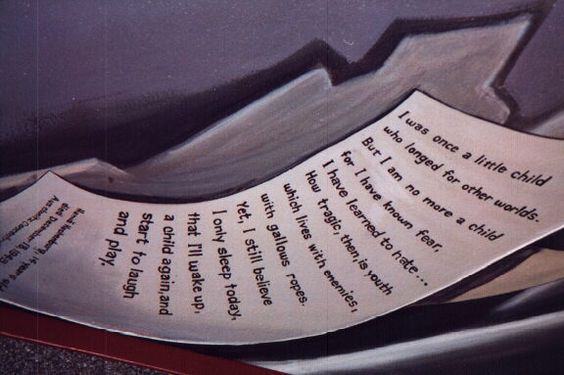 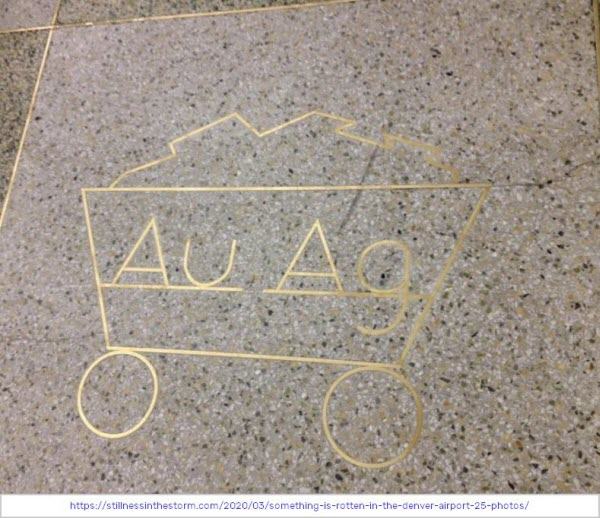 In the right lower corner (you can barely see it in any photos-watch the videos instead) is a piece of paper containing an actual poem written by Hama Herchenberg a 14-year-old who died in a Nazi concentration camp (died December 18, 1943 Auschwitz Concentration camp).

And in the floor in front of this mural is a line-drawing of what looks like an old mine-cart with Au Ag. These symbolize gold and silver generally, although I’m still unsure why you would do a line-drawing of Gold & Silver at an airport in front of a mural (although all wars are bankers wars!).

But the conspiracy in question is apparently one of the founders of the airport also discovered a new, deadly strain of hepatitis known as Australia Antigen (AUAG), and the conspiracy is that it could potentially be used as a biological weapon. I’ll look into that in the next section.

Here is the poem written out to make it easier to read:

I once was a little child
who longed for other worlds.
But I am no more a child
for I have known fear.
I have learned to hate…
How tragic, then, is youth
which lives with enemies,
with gallows ropes.
Yet, I still believe
I only sleep today.
That I’ll wake up a child again,
and start to laugh and play.”

(AuAg) - I was not expecting what I found (Nanotech!)

Now let’s look up this Au Ag business. (original “conspiracy theory” in the section above)

OK, unless things have been renamed and changed over the decades (and I’ve seen history being re-written in minutes during the pandemic, in Wikipedia, Google search & Facebook results, along with all the fact-checkers and legacy-media working in lock-step to destroy evidence instantly-so believe me, I know it’s possible and I don’t trust these people one iota)-even so, I cannot find any link to support the “Australia antigen” bioweapon claim. Australia antigen looks like it’s known as HBsAg or HB Ag (not Au Ag) (18) (19) (20)

But just when I was about to give up…

I did an AuAg search on Pubmed (and on PubChem). I was not expecting anything ‘conspiratorial’, but now I can’t dismiss that there “may” be some rabbit holes to go down. It’s still referring to AuAg as Silver/Gold but not in the way our minds would think about it lol. This AuAg is used to create nanoparticles used in biomedicine, agriculture, and more. #JustSaying #BarkingRightUpTheConspiracyTree #AnotherRabbitHoleToExplore

Firstly, my results were already filtered for the past year (so I haven’t searched beyond 2022-2021), but there were still 103 results that I have no time to look at-the most recent being this month (that is July 2022, just a few days ago).

I honestly do not have time to deep-dive into all these studies, I wish I did-but I’m just saying… there may be something nefarious about this-something more to it than silver and gold and something way more serious than Australia Antigen… at least it’s truly interesting to find these studies just by looking into the AuAg thing-at the very least… WTF are they are doing? lol

By no means do I want to start any new conspiracy theories lol-by God we have enough going on in the world that we actually know about. I’m just reporting what I noticed, so before anyone gets trigger-happy, you should read all the research, talk to the researchers, talk to people in the field, make sure we understand what it is before we assume anything prematurely.

It could be something harmless or meaningless. I’d have to go through them all to figure out what it is exactly, and normally I would, but I don’t want to waste too much time on Denver when I have a whole list of more serious things I should’ve been working on (Flu Shot, geoengineering, etc.) but I randomly got distracted by an online image, lol… but check out what came up in the results:

Wow, when I get time, there’s another rabbit hole to go down:

There is a “Dedication Capstone” dated March 19, 1994, with a Time Capsule beneath (to be opened in 2094). It’s dedicated to the Freemasons who helped fund the airport, and contain the names: 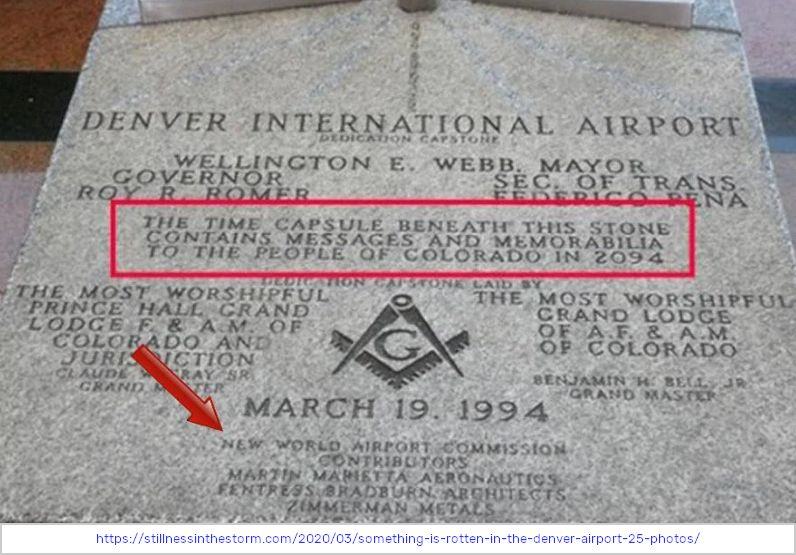 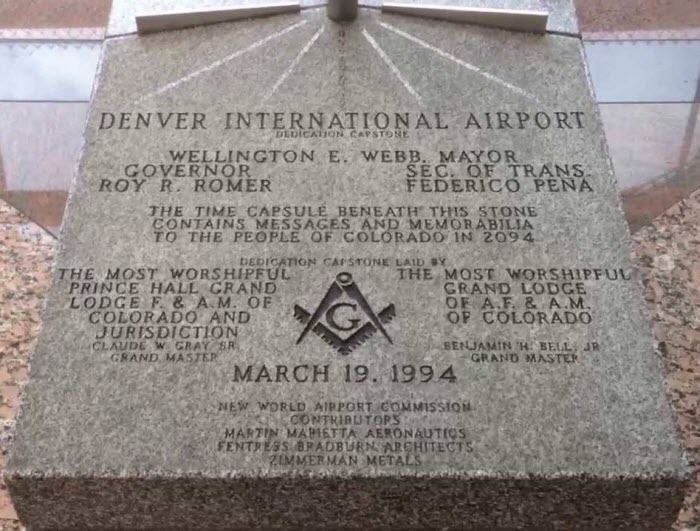 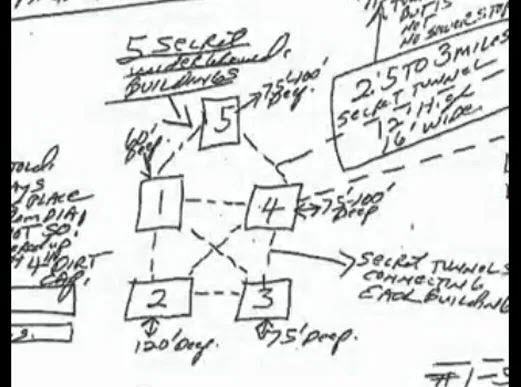 (StoryTelling) Bailey Sarian on the Murals