Home  •  Pilgrim Society (Who the heck are they?)

Pilgrim Society (Who the heck are they?)

If you’ve been with me on this journey from “strictly mainstream” to “what the fu*k is really going on?” “WHO is doing this to us and WHY?” and “How did this happen? How did it get so far?”, then you might be interested in this interview and book I stumbled upon.

A few days ago, I published old LP recordings from Myron Fagan (United Nations As A Communist Front For One-World Government), and you probably read in there that I struggled with trying to match up the history because I’m such a newbie to the topic. Another of the pathways I’ve mentioned and provided downloads for is the connection between the Pirbright Institute (the ones that own the patent for the coronavirus) and the Pilgrims Society, so whenever I come across something to do with the Pilgrims Society, something unknown to me pre-pandemic, I am paying attention and trying to learn more.

The other night I found this really awesome tool which I’ve just completed a separate post about because it’s so useful. It enables you to search captions, i.e., “YouTube subtitles”—even of videos that have been blocked or hidden—that would never come up because the search is so rigged. You can find words that are 7 hours deep in a 12-hour video that you would never have found. It’s so handy. So that’s how I found the following interview that helped me further with the history I’m committed to understanding eventually.

The tool above took me straight to the part in this video where he discusses the connection between the Rockefellers and the Pilgrim Society, and how it all ties into the Rothschilds, the IMF, the UN, the World Bank, the BIS, the CFR, the CIA, and just about every 3-letter-committee in the world and on and on.

The interview is with a former Journalist, Paul Williams, who was 75 at the time of the interview (December 2019, just before the “pandemic”), and who is the co-author of the following book:

Although the Pilgrim Society and the powerful men involved are often praised for their philanthropic actions, Howard-Browne and Williams show that the Society was self-serving and subjected the American people to a brutal system of economic tyranny, one which is still in place today.

Killing the Planet is a thoroughly documented and impeccably researched book, with over 1,500 footnotes. It shows how mankind has become enslaved within the Luciferian world system that is managed and controlled by the world’s wealthiest families. The book is not full of conspiracy theories but, instead, unfortunately for all of humanity, full of gut-wrenching facts.

The Kindle version is around $3- which I just picked up because it includes all the references. I also just spent the entire weekend listening to the Audible version and it filled in so many gaps for me (a lot of researchers state how powerful these people are, but not “how” they “got” to where they are, and direct quotes from their own documents. So many “ah-huh” moments as the dots that I was missing were filled in, the names that were missing for me, and the “how” they monopolized the planet – so very useful.

So, extending on what I’ve learned from Fagan’s expose in the 1960s, Douglas Gabriel and Michael McKibben‘s research, and all the Politicians & Insiders Warning About The NWO Or Great Reset and this book, I should have a far better grasp of this version of history that I’m still trying to get my head around.

It’s hard to know what we should be spending our time on these days when these people are the ones that instigated everything we’re experiencing, put it all in motion, so that even after their deaths, their dream to enslave the world is still playing out, and so we should understand how it started, yet we also need to work on solutions and figure out all the other atrocities we’re about to face regarding the CBDCs, the digital enslavement, the vaccines, and, you know, just about everything.

So this interview is 1 hour and 40 minutes, but I just cut out a few parts about the Rockefellers and the Pilgrims Society because that’s the bit that gave me clarity to Fagan’s research, and the Pilgrims Society is something I’d never heard of pre-pandemic, yet they are so involved in today’s current events and what we’re experiencing now. But the rest of the interview is full of so much interesting information (starting with how cars were meant to run off fermented food…and how Rockefeller figured out how to outlaw it… and more about how they infiltrated religion to corrupt it, like, really interesting and important stuff).

18-minute Clip on the creation of the Pilgrims Society

I was going to transcribe it and timeline it to compare it to Fagan’s, but as you can see below, I have an urgent pressing matter; I have to try and save this website, so I need to focus my time on urgent ideas on how I can save the research I’ve already done, which is kind of ironic, isn’t it?

I’m writing about the very people who literally started this in motion over a hundred years ago, this control-slavery system, for the woes that all of us are experiencing today. What they instigated back then could be the thing that makes me lose all the research I’ve had to do so far.

We need to figure out ways to literally survive, and it’s just horrible seeing how successful they were at literally reaching all of us around the world, turning the entire planet into their slaves, and that, as I write about them today, the original instigators that put this in motion are dead, and yet, as they’ve “passed the baton” down through their families, they are still effectively ruining everyone’s lives right now in current times; and strangling me right now in this minute, from their graves.

Douglas Gabriel quote, ‘I’m not worried about Jews, I’m worried about BLOODLINES and in case of Cecil Rhodes no one has pointed out the Jews who did not practice Judaism, of The Pilgrim Society‘.

They’ve released it for free on Spotify and you can also buy it on Audible for around $5-$6:

The Phantom Virus: How an Unseen Enemy Shut Down the Planet!
by Rodney Howard-Browne and Paul L. Williams

As well as Socialism Under the Microscope (November 2020)

See also a whole bunch of useful research by Francis Joseph on Academia.edu 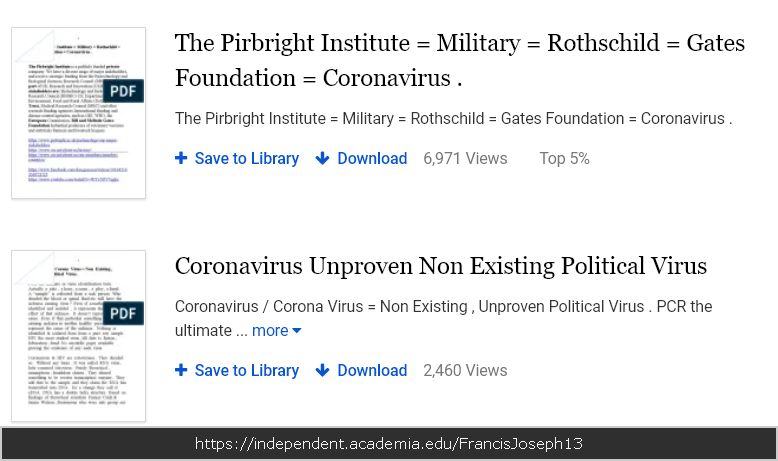