If Paid-Media Actually Read the Studies

Blowing “If it were true, it would be on the news” out of the water is this interaction with a mainstream media journalist (vs “citizen journalists”). The media don’t even know they are lying? No wonder the world is a mess. Journalists have drunk the Kool-Aid (the “group-think narrative”). They don’t read any studies, yet they are reporting what they are saying as facts.

Another one that’s been in draft since December 2021.

If you watched the above interaction, do you see the problem here? (other than the freedom-warriors being total pricks and berating him instead of providing him with the right resources).

The big problem with this interaction, is the ‘media’ believe their own lies.. or at least this one doesn’t even seem to know he is lying.. he doesn’t even know what is going on, he is just “reading a script” and “browsing facebook” for sources? Hasn’t read ANY studies?

This video disturbed me more than most because I thought the media actually knew what we knew and was deliberately lying to the public, but it seems it’s way worse than that – they actually think they are reporting facts – and don’t actually read anything that contradicts what they think is true — that is way more dangerous.

Hmm but perhaps there is a spark of hope there too – if he and others like him really is open to reading the studies – if those like himself that are on the ground, doing live-feeds, suddenly ‘wake up’ – this ends…

And it’s not just MEDIA that may be completely unaware of any evidence that contradicts “the Agenda”, it’s our Medical Professionals, our Teachers, Police & Military forces, Celebrities, Employers, and Friends.

The Citizen Journalist could’ve been talking about any number of studies here, but I’m going to assume he’s talking about the one that cost the most number of lives because patients worldwide were denied access to HCQ and IVM—both out of patent, cheap, effective drugs that, along with Zinc and Vit C & D, reduce hospitalizations and deaths when used early. This is the retracted study and related articles that I think he’s referring to that would’ve been a game-changer and a complete ‘pandemic-crusher’ and we’d be living in a completely different reality right now without all the unnecessary deaths:

Retracted study that betrayed the world: Killed millions, caused the experimental jab-rollout, caused the division in society. This is the globalists’ most successful murder campaign, literally, because they fraudulently created a fake study (that killed people). People were denied medical treatment, hospital protocols were changed, safe drugs and good health advice were censored, banned and vilified, doctors deregistered if they dare try and help their patients, pharmacists threatened, lockdowns enabled and businesses shut down, suicides, elderly & vulnerable isolated, family divisions, kids out of school and told they might kill their family, forced medical treatments, threats, fear, evil… you name it… this study successfully fucked the world, and was retracted a few days later-but the damage was already done; the mainstream media had already lock-step made the study go viral, demonizing HCQ and making it political, which enabled the globalists and drug companies to take over the world. 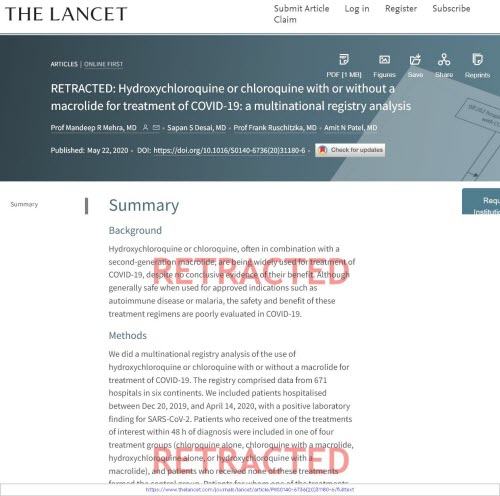 But the FDA’s basis for revocation of the EUA for HCQ was on the fraudulent and retracted study, and they revoked it AFTER the study had already been Retracted– 2 months prior!

Read it again and again until you get it. Study was published May 2020 vilifying HCQ for covid – and the news made the study go viral (the media made HCQ political due to Trump mentioning it after Dr Zelenko of New York, told him it was working for his patients). Study was proven fraudulent and retracted a little over a week later (after it had gone viral by the media). YET TWO MONTHS AFTER the study was retracted, FDA de-authorizes the use of HCQ for covid — because of that falsified study —- that had already been retracted.

Imagine if we had a working treatment to prevent severe-symptoms – that was authorized, virtually free, and off-label (so any chemist in the world could make it without paying bigpharma a cent) all the way back in May 2020? No jabs, no remdesivir, no ventilators, no pcr tests, no emergency powers, no dictatorship, no lockdowns, no missing school, no elderly dying alone, no fear, no lost relationships, no lost jobs, — no nothing. The Covid-narrative would’ve been a ‘nothing-burger’.

So many sources to choose from—which do you think is the most important to share with mainstream media journalists who seem to be completely unaware of anything outside of the group-think parroting programme because they “don’t sit down and read studies, mate” (What the actual fuck? What do you mean you don’t research?)..

Where do you start? If you could send a list of “must-see” if they are really this far behind the truth?

If mainstream media were working for the people instead of the globalists/corporations, the world would look very different. Now we have to live through a dystopian digital-prison/medical-apartheid decade before the ‘survivors’ wake themselves up out of docile-slavery, and stop complying to this “policy war”. Teach your children how to critically-think because they are the ones that are going to be paying for our blind obedience.