Home  •  Sean Hartman’s dad wants to know “What happened to my son?” after Pfizer shot

Sean Hartman’s dad wants to know “What happened to my son?” after Pfizer shot

“I’m not an anti-vaxxer at all, I’m really not, but I think there is something wrong with this one” Sean Hartman’s dad wants answers to his son’s Pfizer death.

On January 17, 2022, the Toronto City Council’s Board of Health held a virtual hearing to address the city’s reaction to Covid. The conference was open to the general public, and it featured public speakers who shared their thoughts on the local administration’s approach to the declared pandemic.

Dan Hartman, a Toronto resident, testified before the Toronto City Council that he suspects the Pfizer injection murdered his 17-year-old son, Sean.

The grieving father explained that his son, Sean, reacted badly to his first shot and died just a month later. Hartman only got vaccinated to play hockey in an arena where it was mandated.

My son played hockey, his name is Sean Hartman, since he was eight years old. He took a year off for COVID, and he got extremely bored sitting in his bedroom. He decided to go back to hockey this year, and to do that, he had to have a vaccination to play hockey.

He got his first shot of Pfizer on August 25th, went to the hospital on August 29th with a bad reaction, he got sent home with only a prescription for Advil.

He had a rash all over his neck and face and brown circles around his eyes. They sent him home and on the morning of the September 27th, his mother found him dead on the floor beside his bed.

And all he wanted to do was play hockey.

So I’m just wondering really how safe this is, and why no deaths are being reported. You’re talking about numbers and ICU’s, but nobody ever talks about deaths. And it is happening, more than anyone knows, and it’s just being denied and silenced.

And I have a Twitter page called @Answers4Sean which has 7500 followers, who are all wondering the same thing as me: “What happened to my son?”

He had an autopsy done in Toronto that came back:

Cause of Death: Unascertained.
Which only 2% of deaths have that conclusion.

The only thing they found was a slightly enlarged heart.

So I questioned the coroner, “Well is that not caused from the vaccine causing Myocarditis?” They’re saying there was no myocarditis.

I sent his autopsy report to a second well-known pathologist in Canada who wants remain anonymous for fear of losing his job. He told me the vaccine did kill my son.

I don’t know who I can believe anymore.

I have to go the rest of my life either thinking there’s no cause of death or it was the vaccine, I just don’t think vaccines for kids to play sports is the right thing to do, considering Omicron is a lot less powerful than Delta.

My brother and his wife and their 3 kids all have Omicron right now and they’re all perfectly fine, they say it’s not bad at all, even one of my nephews has no symptoms whatsoever, but tested postive.

I just would like some answers to why my son is gone, and if you want to take a look at my page, you’ll see just how much of a special boy he was, and what he meant to me, and now I have to go through the rest of my life with this pain, and I just want answers and nobody will give me any – that’s all I really wanted to say.”

What do you plan on doing next if you don’t mind sharing that with us?

“I’m not sure where to go next – he was only 17 years old, he was perfectly healthy, this boy didn’t even put salt on food, never drank pop, I have one coroner telling me they have no cause of death, and then a second opinion who wants to remain anonymous to keep his job, which is pretty sickening to begin with – that he has to say it like that, he told me that it ‘is’ the vaccine that killed him – so I don’t know what to do.

I’m not allowed to sue Pfizer for some reason, that in itself tells me they knew people were going to die, and they’re just immune from any accountability – which is so weird, because most companies in this world stand behind their product.

I just – I know in my heart and soul, I believe the second pathologist that the vaccine killed my son,and it’s not rare as everyone thinks it is. It’s happening; it’s on Twitter every day, people dying from this. I’m not an anti-vaxxer at all, I’m really not, but I think there is something wrong with this one. It wasn’t even tested for five years – they just pushed it out there to the people.

Have the two coroners seen each others reports?

“I can try to make that happen – it’s the same report, it’s my son’s autopsy, I got it from Toronto, and then sent it – the exact same report to another pathologist. So I don’t know if they’d wish to discuss it with each other, I’m not sure, I could try to see if that could happen.

Despite Dan being invited to speak at the city council meeting after the board heard about his son’s “vaccine” death, they edited out the father’s heart-wrenching testimony claiming that it was because it “disclosed the personal health information of a minor without authorization.” – (Sorry, but how does the passed loved-one give authorization, the parent of a dead child can’t give authorization?) 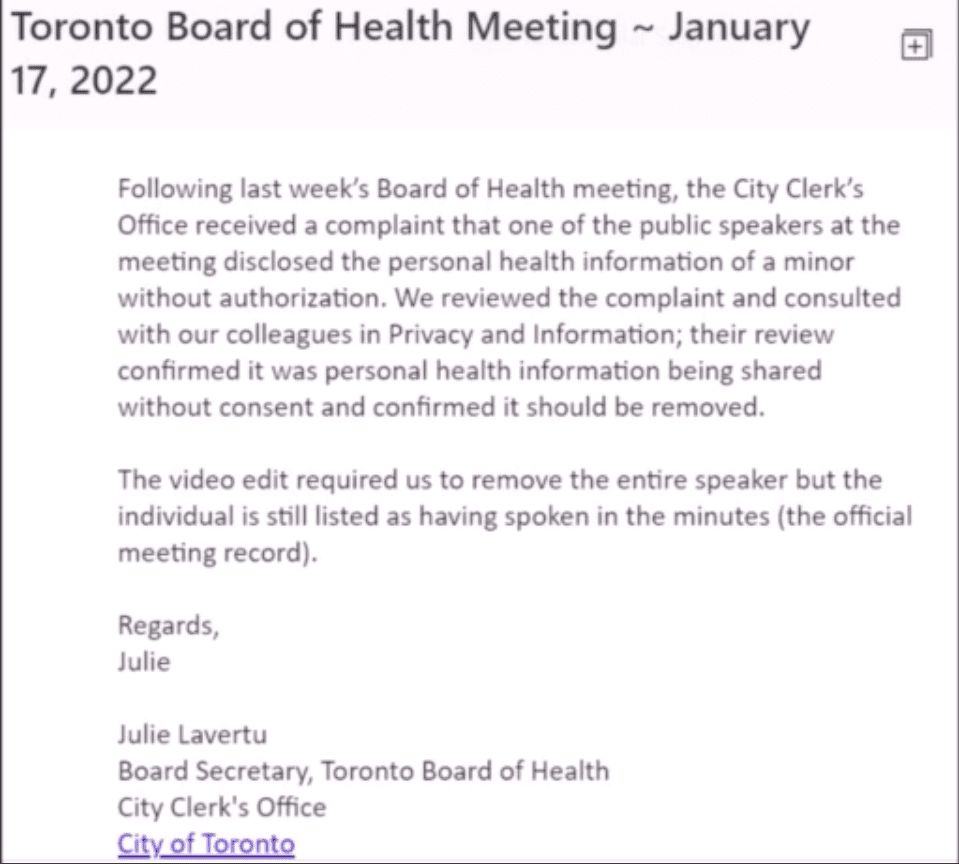 When you are coming from a place of love for and service to your Creator, a life of service to others will become a natural outflowing from that. Always look for ways that you can be of assistance to your fellow beings. Be of encouragement to others. Build people up, and do not put people down. Be a beacon of light in a dark world.