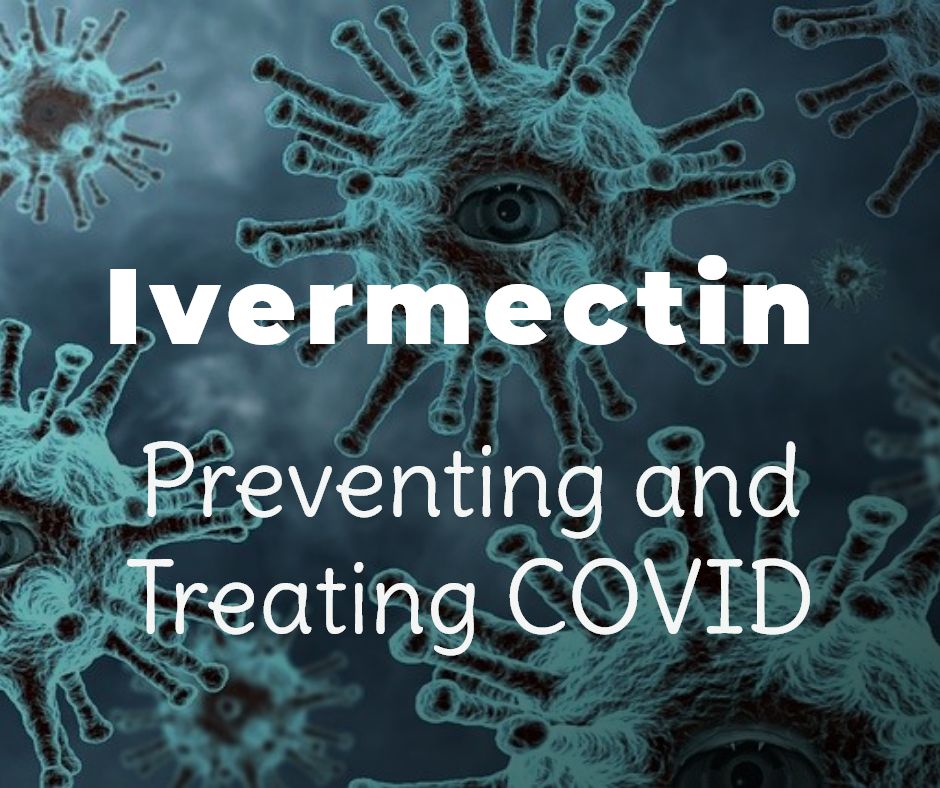 Thought it was time to do an updated post now that we know more about it. Pretty much everything I researched originally is still valid protection. The major breakthrough is the efficacy of treatments, in particular, Ivermectin; which has the bold claim that ‘if you take it – you won’t get sick’.

Before I get into sharing what I’ve learnt about Ivermectin, I think the following recommendations belong at the top of the post before it gets lost in translation. These are the Front Line COVID-19 Critical Care Alliance (FLCCC) recommendations for preventing COVID:

FLCCC recommendations if you have COVID Symptoms:

Make sure you go to FLCCC for latest updates as the protocol for symptoms/exposure may change on a weekly basis as they get more and more information all the time!

So what is the FLCCC?

FLCCC is a group of colleagues experienced in Critical Care and Emergency Medicine and shared interests in developing effective treatments for critical illnesses. They formed an alliance devoted to creating a treatment protocol against COVID-19 in early March 2020.

They came up with the above protocols for preventing and treating COVID and they are the one’s who when they realized the effectiveness of Ivermectin tried to get the word out to the world. Their first press conference was on December 4th 2020.

And with passion and urgency, they are the one’s who got in front of the senate to get the NIH to change their stance on Ivermectin; (which was semi-successful – they changed stance on “not recommended outside of clinical trials” to “insufficient data to recommend for or recommend-against“). (See also.) (See also.)

After all the research and hours of videos I’ve watched and documents I’ve read, if I could only get the world to watch just ONE video, I’d choose the one where he explains it to the senate. Please watch and share this video far and wide so that practitioners all over the world find out about it. It’s an outrage the ‘Western’ world doesn’t know this

His testimony can be downloaded at the following link:
https://www.hsgac.senate.gov/imo/media/doc/Testimony-Kory-2020-12-08.pdf

Now, have you watched the above video?

Because if you haven’t… this is the time to click on it.

Nutshell notes for those who can’t sit through a video right now:

Q.) Is Facebook staffed with expert epidemiologists and infectious disease researchers to your knowledge?
A.) Not to my knowledge, certainly not.

Q.) Should Facebook be the arbiter of what counts as medical research in your opinion?
A.) Of course I don’t think they should be the arbiter’s but I’m trying to be fair – I do think their intent is to protect people from misinformation, however they are also blocking good information. It’s a very hard filter to put on and I can understand their challenge. I just wish they did better at it.

Unfortunately it’s a pattern we’ve been seeing in Facebook and other social media giants who have now decided that they will be the arbiters of ALL information, news, journalism, and that they will determine what counts as accurate, reliable news, research, and everything else, despite usually having ZERO expertise in any of these areas. It’s really unbelievable.

Q.) The death rate in India is 85 per million and in the US and other advanced nations, it’s closer to 800 per million. Are you aware of what these other countries have been doing? They don’t have the funding like we do – all they have is these cheap, generic drugs, I’m not a doctor – could anybody speak to that?

A.) We’ve worked with a number of analysts, and 2 of our analysts have been doing numerous epidemiological analysis throughout the pandemic. One hypothesis is that they have younger populations – I want to show you that is not true.
Slide: (Peru)
Data shows 8 states of Peru that initiated Ivermectin distribution campaigns throughout their population. In each of the 8 states, it rapidly decreases the mortality rates to pre-pandemic levels.
Slide: (Paraguay)
In one of the states, the government got COVID, his brother got COVID, they took Ivermectin and felt immediately better, and so they concluded that Ivermectin was an effective treatment. The governor did something really dramatic. He immediately began what he called a ‘de-worming campaign’ throughout his state, because he didn’t want to go against the ‘federal health ministry’ which was against Ivermectin. In his state, he began to distribute Ivermectin to the population. (Graph shown). A month and a half later, he found almost no cases in the hospitals.
Slide: (Mexico)
One state decided to implement Ivermectin in it’s treatment protocols, and if you look at the case-count, you see the deaths plummeted, while in ALL the surrounding regions in Mexico, the deaths either decreased only slightly, or in the majority they increased. You are seeing this play out on population-wide basis, in many regions of the world.
Slide: (Lima, Peru) (Lima didn’t implement Ivermectin, and slide shows Lima in comparison to the 8 states that did).

When Asked about the Risks of taking Ivermectin….

Q.) So is there any harm in “giving it a shot” as opposed to doing nothing which is what NIH guidelines are right now?
A.) So what are the risks of treatment with these agents? I’ll tell you in medicine, as a physician, every decision I make therapeutically involves exactly that question. Which is a Risk-Benefit analysis. If the therapy I have is low-cost, low-risk, or extremely safe, and it’s potential for benefit is high, it would win the risk-benefit analysis, and you should be giving it, and I think that is what you’ve been arguing. With these agents, the answer is unequivocally YES.

When you look at the mortality and morbidity of this disease which is unparalleled, we’re seeing countless deaths and it’s horrific the way they’re dying, and you look at the safe and low-cost agents, it seems a no-brainer that you should try it.

And here’s the thing about Ivermectin, because you know that is my message today, that it is the CURE for this pandemic. You have to understand something about Ivermectin. 3.7 BILLION doses have been administered since it was first developed in 1987. It has an unparalleled safety profile, with almost no side-effects. The only side-effects that have been contributed to it are those that are considered to be part of the diseases they treat, which is the ridding of the parasites.

On COVID not being the “Flu”…

Two things I want to mention. This is not the flu, I’ve been a doctor for a long time. I will tell you from the earliest onset, in one major healthcare system in New York, they went from 95 ICU beds in a span of 2 and a half weeks to 350 ICU beds. Gastroenterologists were taking care of dying patients on ventilators. We do not do that with the flu. I have done nothing but take care of COVID patients since the beginning, we have ICU’s dedicated to COVID patients on ventilators. That is not what happens with the flu.

Ivermectin has shown itself to be a highly effective preventative, and early treatment agent. It needs to be immediately adopted systematically, nationally, and globally. Period.

Here are other good sources to get an up-to-date understanding Ivermectin:

Dr. John Campbell is looking at the data of Ivermectin (Dec 2020):

Dr. Syed (Dr Been) Explaining (back in Oct 2020) how Ivermectin blocks COVID and also explains some of the Ivermectin studies, and what he prescribes for his own patients.

Here’s a testimonial from someone who took it when they had COVID that you may recognize:

So what exactly is Ivermectin? Well the story of how it came to be is pretty interesting:

What do penicillin, aspirin and ivermectin have in common? Apart from the fact that they rhyme, all three belong to a very select group of drugs that can claim to have had the “greatest beneficial impact on the health and well-being of humanity”. They have at least two other things in common: all three were found in nature and all three led to a Nobel prize.

ivermectin- a drug that has improved the lives of millions of people since its discovery in 1975. The story of how ivermectin was discovered is quite incredible.

In the late 1960s, Satoshi, a microbiologist at Tokyo’s Kitasako Institute, was hunting for new antibacterial compounds and started to collect thousands of soil samples from around Japan. He cultured bacteria from the samples, screened the cultures for medicinal potential, and sent them 10,000 km away to Merck Research Labs in New Jersey, where his collaborator, William Campbell, tested their effect against parasitic worms affecting livestock and other animals.

One culture, derived from a soil sample collected near a golf course southwest of Tokyo, was remarkably effective against worms. The bacterium in the culture was a new species, and was baptised Streptomyces avermictilis. The active component, named avermectin, was chemically modified to increase its activity and its safety.

The new compound, called ivermectin, was commercialised as a product for animal health in 1981 and soon became a top-selling veterinary drug in the world. Remarkably, despite decades of searching, S. avermictilis remains the only source of avermectin ever found. Ivermectin, in fact, was the world’s first “endectocide” – a drug with activity against a wide variety of internal and external parasites, from nematodes to arthropods.

It has also proved to be astonishingly safe for humans. This is because the drug acts by binding to special channels on the cell membrane (called glutamate-gated ion channels) that play a fundamental role in nematodes and insects. In mammals, however, the drug has no effect since the neurons expressing these channels are protected by the blood brain barrier. In addition to its high safety profile, no convincing evidence of drug resistance has been found to date among Onchocerca worms, despite 30 years of continued use and billions of doses administered. Because of its impact, safety and versatility, ivermectin has earned the title of “wonder drug” among public health specialists.

Now… Where can you can Ivermectin?

Well it’s prescription-only in all countries as far as I can find, which is in my opinion a crime against humanity, especially if your local doctor is not up with the latest findings (another reason to get that video shared far and wide).

In the USA and some other parts of the world:

Side effects of oral ivermectin are rare and usually minor, and include:

Another source I found included a lot more Side Effects, and they re-iterate that the side effects depend on the condition being treated (so depending on what parasites you have in your body, as to what you will experience):

Serious side effects and their symptoms can include the following; (Bolded the most serious which seem to be rare)
Pain in your neck and back, Serious eye problems.
Redness, bleeding, swelling, pain, loss of vision, shortness of breath, inability to control urination, inability to control bowel movements, trouble standing or walking, confusion, extreme tiredness, extreme drowsiness, seizures, coma, low blood pressure.

Every day we wake up in the same room and follow the same path to live the same day as yesterday.