Is Ivermectin Safe if Pregnant? (Notes) 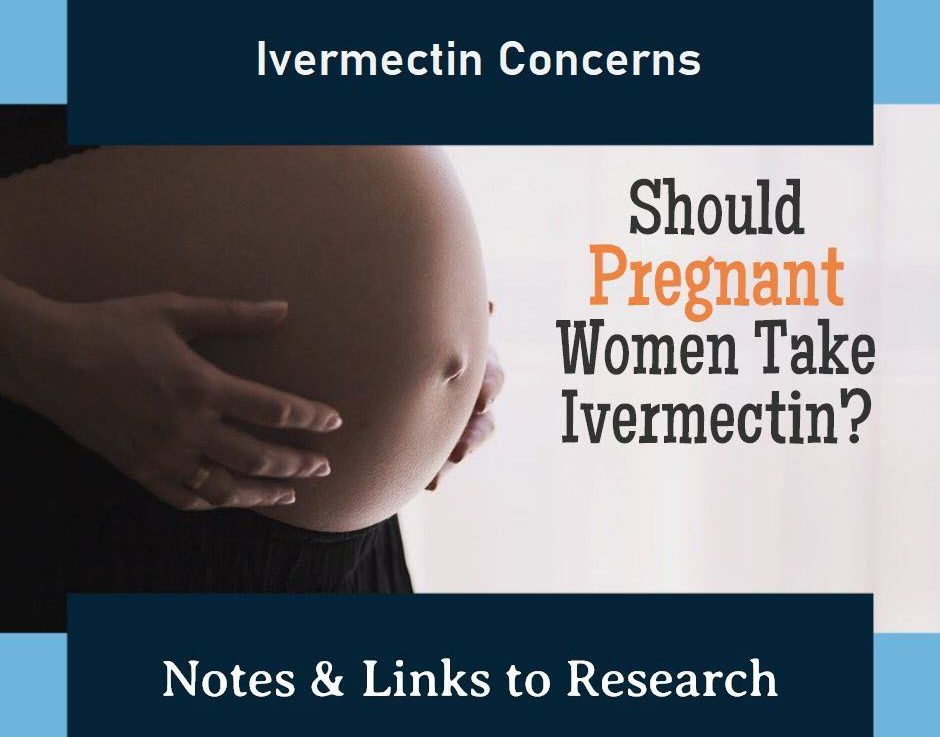 Just want somewhere to record my findings on Ivermectin’s use on pregnant women since I’m seeing the questions arise in social media, and of course there are a lot of pregnant women that wish to know whether it’s safe or not.

Disclaimer: I have an obsession with Ivermectin but no qualifications, I’m just a “keenly-interested-citizen”

Nutshell: Not many studies have been done, but in the pregnant women who were inadvertently given Ivermectin, there doesn’t seem to be evidence of a higher risk associated, however, literally every study says there really is not enough (insufficient) evidence and that you should consider whether the risk of disease is greater than the absence of treatment).

It seems that most people who have queried that question, are all referring to this one study where pregnant women were either inadvertently or purposely given Ivermectin:

No evidence of higher risk:

Of 2985 women of childbearing age (15-49 years) who were interviewed, 343 were pregnant during the mass drug administration. Some pregnant women 50 of 343 (14.6%) had thus been inadvertently treated. Of the six children found with some congenital malformations in these communities, one had been exposed to the drugs in-utero. The relative risk for congenital malformation after exposure was 1.05 (P=1.0). Two of nine reported spontaneous abortions had been exposed to the drugs (P=0.62). We conclude that the local mode of excluding pregnancy in the current programme, while not perfect, is sufficiently effective and reliable for such a public health intervention; and importantly, that there is no evidence of a higher risk of congenital malformation or abortions in those who are inadvertently exposed. (03)

(Note: This PDF includes all references at the bottom, but does not indicate which paper it is referring to with it’s statement of “used safely in pregnant women”)
Concerns of safety in the setting of liver disease are unfounded given that, to our knowledge, only two cases of liver injury have ever been reported in association with ivermectin, with both cases rapidly resolved without need for treatment. (Sparsa et al., 2006;Veit et al., 2006). Further, no dose adjustments are required in patients with liver disease. Some have described ivermectin as potentially neurotoxic, yet one study performed a search of a global pharmaceutical database and found only 28 cases of serious neurological adverse events such as ataxia, altered consciousness, seizure, or tremor (Chandler, 2018). Potential explanations included the effects of concomitantly administered drugs which increase absorption past the blood brain barrier or polymorphisms in the mdr-1 gene. However, the total number of reported cases suggests that such events are rare. Finally, ivermectin has been used safely in pregnant women, children, and infants. (04)

One of six studies was a randomised controlled trial of pregnant women who received ivermectin in the second trimester.6 Overall, Nicolas and colleagues’ systematic review and meta-analysis identified no studies showing evidence for excess abnormal birth outcomes in woman who received ivermectin during pregnancy. They then applied the rigorous Cochrane Risk of Bias Tool for randomised trials and classified all studies to have very low certainty of evidence. Consequently, they concluded that current evidence does not support whether ivermectin is safe during pregnancy and recommended to continue to exclude pregnant women from treatment during MDA programmes. (05)

Pregnant women are at increased risk of certain infectious diseases, such as influenza, malaria, hepatitis E, measles, smallpox, and herpes simplex virus infection, potentially owing to a weakened adaptive immune response. Yet, the susceptibility to scabies has not been specifically investigated in pregnant women, and scabies accounts for 2% to 6% of all pregnancy skin diseases according to observational studies. To date, scarce data specifically related to treating scabies infestation in pregnant women are available. Currently, only topically applied scabicide drugs are available for treating scabies infestation in pregnant women in most countries. (06)

There is insufficient evidence to conclude on the safety profile of ivermectin during pregnancy. (07)

The safety of ivermectin in pregnancy has not been established. A discussion of benefits vs. risks with your provider is required prior to use, particularly in the 1st trimester. (08)

Two cases of the use of ivermectin during pregnancy have been reported. These reports found that the risk of fetal damage in pregnant women treated with ivermectin was no greater than control. The risk versus benefit should be considered in pregnant women heavily infected with parasites, especially during mass distribution of ivermectin in endemic areas. The advantage of treatment may outweigh any potential risk to the infant. (10)

The safety of ivermectin in pregnancy has not been determined. Ivermectin may increase the risk of congenital malformations particularly when used in the first trimester. US Food and Drug Administration (FDA) has classified ivermectin as pregnancy category C—i.e, “Animal reproduction studies have shown an adverse effect on the foetus and there are no adequate and well-controlled studies in humans, but potential benefits may warrant use of the drug in pregnant women despite potential risks”. In pregnant patients with symptomatic COVID-19 infections the risk and benefits of ivermectin should be discussed with the patient, and informed consent obtained from the patient should the drug be prescribed. Additionally, women should be counselled that low concentrations of ivermectin are present in breast milk; the implications of this finding are unclear. (11)

The decision to use ivermectin during pregnancy should consider the specific indication (eg, onchocerciasis or Strongyloides infection) and the risk of disease progression in the absence of treatment. (12)

Cows:
There is no known association between deworming with ivomec products and abortion. Many cows have been dewormed with this product, and products like this, at fall pregnancy checks without this adverse effect. (14)

Not many studies have been done – that is the conclusion – they just don’t know. They do know that in the pregnant women who were inadvertently given Ivermectin, there didn’t seem to be evidence of a higher risk associated, however, literally everywhere – all of the studies agree that there is insufficient evidence and more research is needed, and that you should consider whether the risk of disease is greater than the absence of treatment).

Update: June 5th 2021, DrBeen Medical Lectures added a video in December 2020 about COVID-19 (in general) specifically for Pregnant Women. Although it’s not related to Ivermectin, I believe this video will be very helpful for pregnant women who find this page.