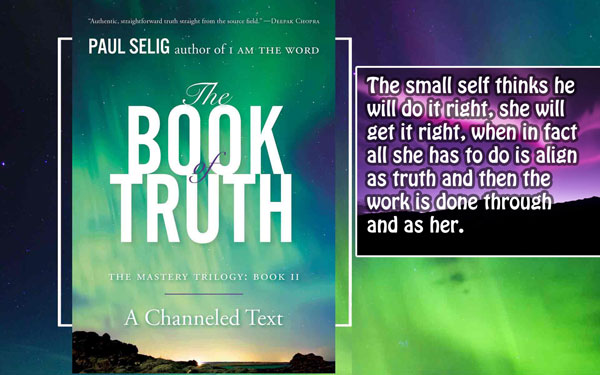 Now there are levels of truth. The first face you see - we will call that the mask - that is the face that's being invited to be seen. "See who I am as I wish. Let me be known as I wish to be."

The second level - we can call this truth - that is the face that's being invited to be seen. "See who I am as I wish. Let me be known as I wish to be."

The second level - we can call this truth - is what is being hidden, is what is fearful of being seen that the mask in fact protects. "You will not love me if you know who I am. You will think me foolish or forlorn. You will desire me in a way that I cannot handle. You will judge me if you understand who I truly am."

Now the next thing that happens, when your intent is to see them in truth, in a loving truth, is you comprehend the aspect of the self that is so afraid. You do not judge that aspect. That aspect was created in fear or in need, and the mask that it covers is a protective device that was created in need as well. So to decide that someone is full of shit, and we are using that word intentionally, is that they are full of the mask that they are wearing to protect themselves from what you would see if you saw beneath it.

Now underneath that level that seeks to be hidden is a luminous self, the child within, the untainted self, the extraordinary being that chose to incarnate and has held form. The witnessing of this aspect of the self is different than the Divine Self. But to render the beauty of another in witness is to bypass the mask, what the mask has protected to the true person - still in personality, but without fear or unmasked - that lies beneath it.

Now then, you go where you may only go, when you know what you are. Those of you who've done work with yourselves - "Well, I know I am not the mask I wear, and I know the fear that I have is covering something even that is not in fear" - you can do this only up to the level of the person self that is still there as you are.

The belief that ascension or acclimatising as the Christed Self keeps you from experiencing pain is not so. If you step on a rock and you trip on your behind, your behind will be sore as the Divine Self, as the small self a swell. It's still your behind.

Now the thing we wish you to know about the process of alchemy and the body is that once it has begin, it is continued only in alignment with what the system can hold. This is very important. Some of you wish this to be realized over night. As we have already said, the alignment to truth is instantaneous, and the holding of the vibration is present in your field as you and is reinforced by your intention/ "I know who I am in truth, what I am in truth, how I serve in truth."

But to hold the frequency of a higher octave and hold a consciousness that will keep you in alignment to it, may be known by you over a period of time or all at once. But the body itself must be appropriated to hold the field in a constant way. This is not to say that we are asking you to invest in process. As we said, the alignment to truth is instantaneous. But the expression of it as what you are in form requires a disassembling of the attachment that you have held to a reality that is fraught with lies.

Now the alchemization of the physical self requires a transmuting of fear that has been held as the body. The memory of fear that the cells in the body hold, that the very strands of your DNA, if you wish to call it that, have known, must be released to the higher octave.

Some of you believe that the life you've lived so far has been problematic, or you have been punished by your circumstances. That is not the case. You come into incarnation with a list of things you need to learn, probabilities that you may encounter as ways to know the self in circumstance. As you know what you are - "I know who I am in truth" - the veils are lifted. And what appeared to be a disaster is perceived as an opportunity. What was perceived as penance is seen as opportunity to grow. What was claimed in fear has seen the light of day and claims you anew as the sovereign self who is no longer attached to an outcome, or something that was once that is no more. The claim you make, "I know who I am in freedom," announces you as the one who may always choose in sovereignty, but as the True Self.

What an incarnation is, is an expanse of time of learning, a charade, perhaps, because the encasing in time is actually only there for the experience to be learned through. You don't incarnate in one year and not another. In fact, the True Self exists outside the calendar. But the physical reality that is being attended to by you may be known in a country or on a date in a place in time. These are markers, in some ways, for what may be learned, what may be known, what may be claimed in physical experience.

Your subconscious mind cannot argue controversially. If you give it the wrong suggestions, it will accept them as true and proceed to bring them to pass as conditions, experiences, and events.

All things that have happened to you are based on thoughts impressed on your subconscious mind through belief.