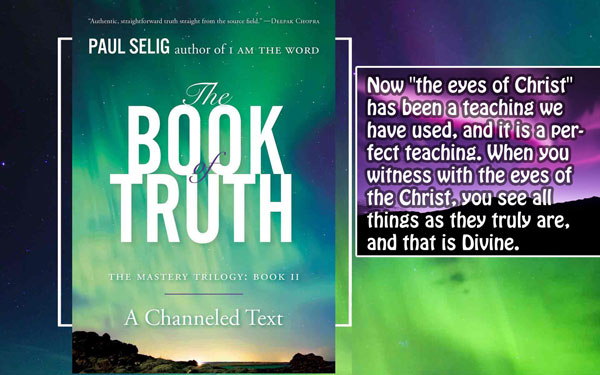 Now as we spoke of alignment earlier, we would like to recommend that every day you set an intention: “I am in alignment to my own knowing.” Now your knowing, if you can understand this, is truth. Whenever you know, you are in alignment to truth. But in the claim of knowing – “I know this to be so, I must do this in my knowing” – you are actually claiming that the being that you are has access to what you are, which is the True Self.

Here is the teaching, friends. The night before you wake up, you realize yourself through the changes you have undergone. The day you wake up, you witness your world either as you saw it yesterday or as you now know it to be. If you can understand that we are really saying that what you become is the Divine in manifestation in a way that is realized and not conjecture, you will comprehend the enormity of the teaching.

Now “the eyes of Christ” has been a teaching we have used, and it is a perfect teaching. When you witness with the eyes of the Christ, you see all things as they truly are, and that is Divine. When you operate with the vibration of truth, you are not discounting the Christ vibration, but you are implicitly stating that what is a lie will be met in truth, and through the seeing of it, by your very witness, the thing you witness is transformed. Herein lies the truth of a new world.

“By clinging to the vault, you deny the savior, the life-boat we suggested, the truth of who you are, which will carry you to safety, because you believe the old will call you where you need to go, and it never will. “

Paul: “You said the word savior, was that your intention?”

We were using the metaphor of a life raft that would carry one to safety. And the life raft that we describe is Spirit, the Divine Self, which you may call the Christ. The idea of the Christ as saviour is not a wrong teaching, but it is also not a religious one.

The Christ exists in all mankind. It may be realized in fullness, which is the work we bring to you, but in its realization it becomes itself. It assumes the being that it is in.

You become the Christ as you know who you truly are, and not the only one. The teaching of Jesus is in fact a very high teaching. We do not discount it, and his teachings are present here because a teaching that is true is always true, as Jesus was the Christ, one who moved toward realization, embodiment, and complete expression of his Divinity.

In other words, he knew what he was, he knew how he served. His claim was made for all mankind. It may be realized in truth.

The confusion you all have is that the embodiment of God, while it is God, is also in all men.

So seeking to worship another is never a true teaching. Aligning to the truth, and to be in vibratory accord with the Divine Self, is to be in Christ. If Jesus is the way shower that you require, he is a beautiful one. But the religion that has been claimed in his name has been distorted, is fraught with fear, and the politics of all religions seek to obscure the beauty that is inherent in all of them.

When you know the truth of the teaching, the truth will set you free. And the biases you may have about the language of religion will fall away as well.

At their essence, all religions are teaching the same thing. The Divine s present in all manifestation. And the only one who may know it is the one who knows who he is in consort with the True Self in Divinity expressed in all ways.

The service that you each provide at this level of manifestation is in being. What you do informed by being at this level will be in truth because you have aligned to it. And in this alignment, you are always called forward in service.

What service means in our language is true expression. You are expressed in truth. And whatever abilities you have been gifted with, whatever you see before you that must be done because it is being resented to you to do, will be known by you, the Divine Self, as part of your expression.

The distinction you must make, as the one being witnessed, is that the agreement you have to be seen as you truly are actually requires you to release what you thought you were supposed to be and the creations of the small self that seek to be affirmed as what she thinks she is at the cost of what she truly is.

Now the Creator as you needs no instruction. But because you have been living on a plane that has been so invested in lies, the small self cannot always tell the difference. She has done the best he could. “I thought I was doing the right thing. I did what I knew how to do.” And yes you did. We do not make you wrong. We do not make you anything. We know you beyond the claims, beyond the issuance, beyond the fabrications that the small self has known and believed to be herself. Once the small self is encompassed by the Divine Self, the alchemy of being and the transition that you make is apparent to you in new ways.

You cannot spend 20 or 30 years of your life building up negative conditions as a result of negative thoughts, and then expect to see them all melt away as the result of 15 or 20 minutes of right thinking.