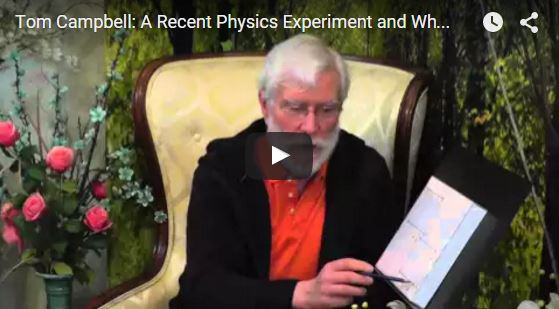 Tom Campbell explains his take on an ANU physics experiment, to suggest that life is a virtual reality game.

Mind boggling. I wrote the same thing from a dream Sept 29th.. (less professional and educational of course, it was just my scattered thoughts after I woke up.. that this reality is an illusion – a game – where we step into the character and develop the game as we go, and those who become ‘aware’ of the game, have stepped up to the developers/programmers level.. once they are aware of the game, they can have way more fun with it… ) .. nutshell.. lol.. and now this video shows me that I’m not the only crazy one thinking this way.. even the “rules” that he talks about.. yikes.. this is going to literally make me go over to crazytown and stay there…

Just one of the many “probabilities” to explain this life/reality that we are experiencing. I love this stuff!

I like this guy, but it’s not going to bring my sanity back. lol. It’s just gonna make me dive deeper down this rabbit hole!

There are no particles. Particles are not particles, they’re probability distributions. It’s just a probability of a potentiality. The particle doesn’t appear until the measurement is made.

Reality is information. This is a virtual reality.
You need a server, computer, and a player / decision maker.
The player and the computer are sharing data back and forth.
Computer has a bunch of players, lots of players/characters in the game. Trees, rocks, water.
Player says “here’s a choice I make with this character”
Computer says “here is the consequences of your choice”
Player says “then I’ll make a different choice”
Computer says “here are the consequences of that choice”
The virtual reality, is 1’s and 0’s on a hard-drive some place.

The computer only sends out data to describe what has happened, when something’s happened.
If there are no players, the computer is not sending data out. It only sends data to players.

Where’s the computer and who’s the programmer?

The real us is in another reality frame that is not physical to us.

We like this reality that we understand, we’re not going to let it go just because some experiments show that it’s wrong.

Everything is an illusion. Entanglement is normal now. Telepathy, placebo/mental healing, become facts in a larger understanding. Everything comes out making sense.

Don’t believe this theory. It’s just a theory. It can’t be your truth if it’s not your experience, you want to go and find out for yourself, you want to experience it. It’s a thing to think about, to ponder.. let me see how well it fits my own personal subjective experience.

Be your own scientist.

Life is a game of illusion – Let’s Play!
Just BE what you want to create
Daily expansion instead of decade expansion. I am excited about … ?
You are the master builder of your own game, and the pawn to go in and play
The world is a reflection of your beliefs
Every single day I expand from yesterday. I level up.
Once I believed there was a cure, I was already healed.
What is the Best Version of YOU doing today?
Change your message, change your life
This intention experiment could change your life & the world as we know it
Why do humans need to question the ‘why’?
Tiptoeing The Matrix
The best of The Matrix [script quotes]
Divine Matrix Notes (You are ALREADY Healed)
Evolve to see the bigger picture – question everything
Step into the highest version of you.