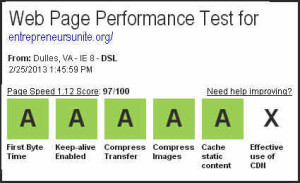 I’m working on a new project right now for an upcoming community site, Entrepreneurs Unite, but this post is not about that, but about speeding up the site by just changing a couple of things, so I thought it would be useful to keep a record of what changed and hopefully help someone else with a slow wordpress site.
It all started with Site5 (my new cloud hosting platform) that, even though it only hosts 6 of my sites (compared to Hostgator which hosts over 60 on a shared server), they have a problem with 2 of my sites:
But they are right, not only was the page loading super-slow for me, but I found Google Page Speed Online and tested http://EntrepreneursUnite.org , I found that it had a really lousy score of just 62 (out of 100).
And with the webpage test tool, it had a similiarly lousy score of: 66/100
So, I decided at 2am, to try and improve the speed – as you do when you’re a bit of a geek and you’re still awake… :)

Before you think you’ve wasted your time so far.. I just want you to know the end result by just changing a couple of things, I was able to improve the site speed HEAPS! It’s now up to 97 (out of 100).

Note: Before you go through this, if you are looking for a step-by-step guide, this isn’t it. It would require a lot of screenshots and knowledge of your specific server setup to provide a complete guide.

If there is any interest, I can at least provide the screenshots on exactly what settings I did for my specific setup, but otherwise, this blog post is just a general guide on what I did to speed up my site, without the specific “tick this, uncheck that” kind of guidance. Leave a comment if you would like me to create a new post with the step-by-step screenshots.

This is what I did to improve the speed:

The page Entrepreneurs Unite got an overall PageSpeed Score of 62 (out of 100).

First thing I changed were the Images:

Google’s speed change informed me about a rather large image I had that was resized by code on the homepage, as well as a whole bunch of images that should be optimized.

Result: The page Entrepreneurs Unite got an overall PageSpeed Score of 68 (out of 100).

Next step was to install W3 Total Cache. I went through each section and tested after each bit to see which made the biggest amount of difference.

After installing w3 total cache and only setting up the general settings & page cache settings:
Result: Score of 86 (out of 100).
(WOW – increased by 20 points just by changing 2 things!)

Next: W3 Total Cache – Setup the rest except CDN/Minify:

(Incredible! in a Fantastic way)

(Oh.. I must of forgotten to empty the minify cache the first time, so not sure if both .js and .css caused the improvement or not, but at least it’s an improvement, wow!

Looks fine in all browsers except it’s totally screwed up in Internet Explorer now.

After disabling the .js minify to fix the IE problem above, the score went down:
Result: 91 (out of 100).
So damn, I really will have to go through each file to figure out which one is causing it, damn IE users :)

I’m pretty happy leaving it at 95/100 – I don’t even think I’ll bother with adding it to Amazon S3 with those results.. 95 is a fantastic score – better than most could ever ask for. So with just one plugin and some image squishes, the site’s speed improved from a lousy 62, to an almost perfect score of 95 – and most of the “problems” left to fix are out of my control (facebook scripts, google analytics, etc).

That was yesterday’s score – I disabled a plugin today “Social Locker” (by accident – it didn’t like to be updated and broke, but it will be reinstalled later when they release a fixed version)  and so today’s score as I write this blog post is 97 (out of 100).

Unfortunately the same settings (except WITH) an Amazon S3 CDN on the PennyButler.com website did not achieve the same success, however I believe that to be because there is still so much to do – there is constant traffic and I don’t want to mess it up so I’m not as “gung-ho” with changing the settings as I was with a site that hasn’t launched yet, the site is huge and has over 1,400 images, and so bulk smush-it kinda crashes the whole site whenever I use it – so I would have a big job of hours and hours going through the media library one page at a time to manually run it on the images – yech.  (Considering this site is not-for-profit as well).  I’m not as motivated to fix this site because it’s already wasted years of my life troubleshooting (when leaving each host before, people hacking into it, the testing and demo sites, the corrupt databases –  this site has been a huge pain-in-the-butt :) But very happy to have a *WIN* on the Entrepreneurs Unite site which will be launched in March.