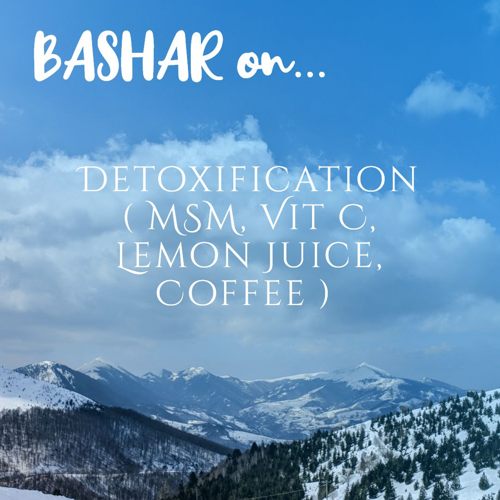 Questioner: You have mentioned MSM before and Vitamin C in regards to Allergies, and I got a paper about it, and it sounded like a good thing, but when I use my pendulum over it for myself, it says no.

Bashar: Did you forget how to use a pendulum?

Questioner: Yeah I know what you mean about throwing it out. So you would recommend that would be ok for me? I mean do we just play with ourselves or what’s the deal?

Bashar: Sometimes yes, sometimes no, but more often than not, most of you are not fully in touch enough with your inner-selves to allow the idea of the utilization of a pendulum to give you an accurate self reading. Therefore, the idea is to first to trust those instincts in another way, from another point of view, the idea here is that more and more in your society, you are beginning to find more natural, and general methodoligies to deal with a braoder spectrum of things. You are simplifiying to deal with a braoder spectrum of ailments. This simplification that you may now only require a few substances to deal with a large variety of distubances in the body, is an indication in of itself, of a direction, of an instinct being followed.

You can begin to trust, that this simplification in of itself, is the pendulum that is swinging in the direction of what will work best for most of you. There will always be exceptions, yes, there will always be some variations for individuals depending on the circumstance that an individual brings to the situation, but yes, the idea in general as we spoketh, is that for many of you, varying dosages of these substances and a few other natural substances will have a great effect. A beneficial effect upon your bodies in general.

Questioner: I eat pretty good, mostly organic, and sometimes refined, but I also drink coffee and other toxins.

Bashar: Well here is the idea to understand. This substance in combination with MSM which is fundamentally, organic sulphur, in combination with what you call high infusion, natural vitamin C, when combined, will go to where the body needs it most for repair. If you are doing things to your body, putting in other toxins, and your body needs this repair in certain places, but the toxins are causing damage in other places, it will go to where the greatest damage is, and may never reach the real place where you may really need it.

Questioner: It seems like it’s better that it’s doing something other than nothing at all…

Bashar: But it may not be doing anything if you are over-shadowing it by putting more toxins in, than you are putting MSM and vitamin c in your body. It may take all of it’s strength to fight off the toxins, and may not have any reserve left over for the things it needs to heal in your body.

Similarily with Vitamin C, you cannot really fundamentally overdose on MSM, therefore, a little bit of larger doses may be in order. That the idea in general is that about 2-3000 mg of vitamin C, and about 2-3000 MG of MSM three times a day. Morning, noon, night, will be what most of you need to show any effect, of healing in your body, and if you have an acute situation, you may need a lot more, you may need the idea of up to 10,000mg a day. The idea of minimum 5-6000 mg per day in 3 dosages over the course of the day, will be what most of you need for maintenance, and that will be the substance and the amount, that will show you in time, some effect, and will start to clear out areas of your body, but if you are holding in more toxins when it is attempting to clean toxins out, then you are simply creating a loop.

Questioner: mumbled something about Coffee (couldn’t hear it but guessing she’s asking if she should quit the coffee)

Bashar: It is not that you cannnot have some now and then. But most of you take far too much, and it isn’t even so much, or the idea that there may be toxins in some of the coffee, but it is also dierectic, it is taking water out of your system. And not allowing yourself to flush the toxins that are there because they are losing water. It is in a sense, drying you out. So if you’re going to have the coffee, it would be wise to increase your water dosage so at least you give yourself a chance to do the flushing you need to do, and thus give the vitamin C and MSM a chance to do what they can do.

A herbal practitioner detecting a synthetic sulphur residue in the body that sometimes comes from different drugs asks if Bashar has any suggestions on how to move it out.

Questioner: You once gave a recipe for people experiencing cancer; I think it was asparagus, beets, celery, something like that?

Bashar: At this time, we do not address the idea of personal health issues, except to refer you to any information we have already given, starting with the idea of the detoxification of the system, and allowing your intuition and imagination to guide you from there. It is at this timing, because of shifts in the energy vibration of your collective consciousness now, not given to us, dealing with that information is now someone else’s job to do, so we are now focused on the idea of helping you understand the vibrations necessary for the shifting into parallel realities of your preference.

Bashar: Have you changed your diet? Will you continue to change your diet? As a permission slip, you will change that experience because in the collective consciousness, you have related the idea of diet, to the idea of that particular dis-ease. Thus then as you remember we said in the initial pre-recording, the idea of cleaning up your act, will help you allow yourself to know that you will shift into a person who not just doesn’t have it, but never did.

Questioner: What are some specifics?

Bashar: Don’t you already know how to eat natural, organic food? Don’t you already know how to listen to your body consciosuness in terms of what is in harmony and what is discord to your frequency?
First and foremost, clean your body of toxicity. If that’s the permission slip that works for you, do it until you have arrived at your optimum setting. It’s as simple as that, you don’t have to make this complicated or mysterious – use what works.

You no longer answer health issues & is there any cure to toxic-chemical reaction?

Questioner: In one of your transmissions you said that you guys no longer do health issues, but that somebody else was doing that. Who is that, and how are they doing that?

Questioner: Is there anything Peter can do to help cure himself of an earlier toxic-chemical reaction?

Bashar: I cannot answer personal health questions. You can detoxify the system, that’s always what we have said first and foremost, and that information still stands in many of the recordings we have shared. Thorough detoxification of the bodily system can be one permission slip to help you on your way, to finding out what else you may need.

Bashar: In general, yes, it is represented as the collective consciousness agreement that in some senses, the higher vibration of the nutrients you ingest, the more compatible it will be with your natural frequency, this is not necessarily absolutely true all of the time for everyone, you have to pay attention to your body consciousness, and allow yourself to know what your belief system is at any given moment, and do the things that are truly representative of what will sustain you. At the same time, as a generalized truth, yes, you will find that the more you are in alignment with your true vibration, the less likely it will be that you will have the urge to eat things that are out of alignment with that frequency, and you can work it in the other direction if you wish, but there’s no sense in forcing spirituality if that’s not what your body consciousness is telling you to need, becasue that would be an oxymoron. But just pay attention to the idea of why it is you choose to eat what you eat, because sometimes you think you’re acting on your excitement when in fact you might be fooling yourself and acting out of your anxiety and covering it up and pretending it’s excitement so that you don’t have to look at it.