Who Owns the World?

These videos are spread throughout the blog on other posts, but wanted a place to reference them separately so will put them here. :)

Monopoly - They Own It All

Monopoly – They Own It All

This brilliant documentary reveals how a small group of superrich criminals have been buying virtually everything on earth, until they own it all. From media, health care, technology, travel, food industry, governments… That allows them to control the whole world. Because of this they are now trying to impose the New World Order.

How this company in less than 35 years managed to take over the world’s data, banks, properties, media and governments, and how they are literally the company that can completely f*ck with the world at will.

Who Runs the World (Blackrock & Vanguard)

Who Runs the World (Blackrock & Vanguard)

If you’ve been wondering how the world economy has been hijacked and humanity has been kidnapped by a completely bogus narrative, look no further than this video by Dutch creator, Covid Lie.

What she uncovers is that the stock of the world’s largest corporations are owned by the same institutional investors. They all own each other. This means that “competing” brands, like Coke and Pepsi aren’t really competitors, at all, since their stock is owned by exactly the same investment companies, investment funds, insurance companies, banks and in some cases, governments. This is the case, across all industries. As she says:

BitChute | Great overview of the above video on YouTube

Great write-up including Full Transcript of above video LewRockwell

Invested in the Poison & the Antidote

Invested in the Poison & the Antidote

2030 UnMasked is a documentary revealing the connection between Covid-19, Vaccines, Masks, the Banking System, and the upcoming “Great Reset”.

Great documentary resource in the public domain for those wishing to educate and inform those they love and care about of the many unanswered questions about COVID-19 and the current global situation and the significant push to enforce consent to participate in the largest untested medical experiment of all time.

1929. Vatican City becomes a state. It has its own newspaper, postal service, radio & television stations, population of about 1000. It has its own army, Swiss Guards (this is why Switzerland is always protected during war times, it controls the Vatican’s wealth) and its own prison. Rules over approximately 2 billion of the world’s 6 billion people. Vatican’s gold worth billions is stored with the Rothchild’s bank of England and the US Federal Reserve bank. Catholic church is the biggest financial power, wealth accumulator and property owner in existence, possessing more material wealth than any bank, corporation, giant trust, or government anywhere on the globe. The Pope, which s the visible ruler, is one of the richest men on earth. Two-thirds of the world earns less than $2 a day, the Vatican hoards the world’s wealth, profits from it on the stock market, and at the same time preaches about giving.

Between 1095 & 1291 AD, the Pope launched 7 bloodbaths called The Christian Crusade – torturing, burning, beheading, and mass-murdering hundreds of thousands of Muslims and Jews, in the name of God. The soldiers were called Knights Templar or Knights of the Temple of Solomon, and evolved into todays Secret of Brotherhood called The Freemasons.

1694. City of London became a Sovereign State when King William the third, privatized and turned the Bank of England over to the bankers. By 1812, Nathan Rothschild crashed the English stockmarket, and scammed control of the Bank of England. Today, the cities “State of London” is the worlds financial power centre & the wealthiest square mile in the face of the earth. It houses The Rothschild Bank of England, Lloyds of London, The English Stock exchange, Fleet Street Newspapers all British Banks, the branch offices of 385 foreign banks and 70 US banks. It has its own courts, flag, laws and its own police force.

The City of London not part of England or the Commonwealth and it pays no taxes. It is also the worldwide headquarters for Freemasonry and house all the money for ‘The Crown’, The Crown being the private City State of London. The Crown corporation of London is run by world’s ruling families, including, The Rothschilds and the Warburgs, The corporation holds the title to crown lands like Canada, Australia, and New Zealand. The British Prime Minister serves as a front for these ruling families.

Washington DC (District of Columbia) was established in 1871, at the same tome The Corporation of the United States was established. It serves as the military arm of the Tri-State establishment. It is located on 10 square miles of land in Washington. It flies its own flag and has its own constitution. Although geographically separate they are connected under the banner of ‘Empire of the City’. When congress passed the act of 1871, it created a different, separate corporate government for the District of Columbia, this act allowed the District of Columbia to act outside the constitution of America. The United States has always been a British Crown Colony, since King James signed the first charter of Virginia in 1606.

I haven’t the time right now to verify this one/go down this rabbit hole… there seems to be much more important things to focus on, but thought it was an interesting perspective to keep in the back of our minds and is in alignment with many other documented theories.

How we got here - how the bankers did it

This is from the documentary “Thrive” (which is a must-watch by the way – released over 10 years ago!). This segment explains how the bankers created this nightmare that we’re now living:

Featuring the Rothschilds, Rockefellers, and the Morgans

SYNOPSIS
THRIVE is an unconventional documentary that lifts the veil on what’s REALLY going on in our world by following the money upstream — uncovering the global consolidation of power in nearly every aspect of our lives. Weaving together breakthroughs in science, consciousness and activism, THRIVE offers real solutions, empowering us with unprecedented and bold strategies for reclaiming our lives and our future. 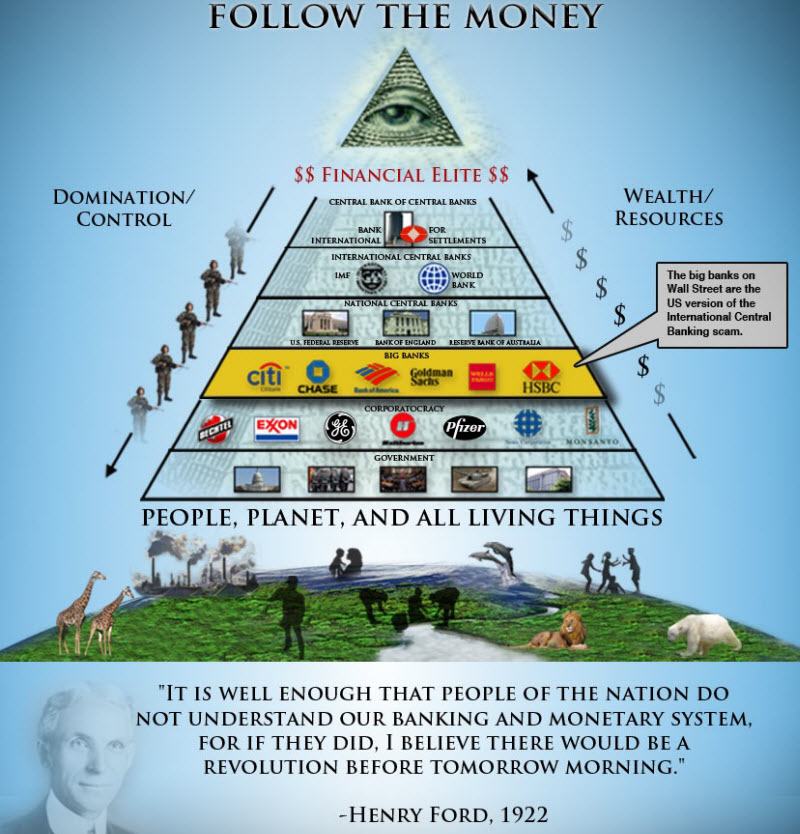 Death is simply the transition from this limited form of reality you call physical existence, to the infinite reality of the nonphysical realm. Life is your temporary experience of what it’s like to be physical. Life is like a quick trip to an exotic land. Nonphysical is your home.