on June 19, 2015 IN Taboo / Divergent
addiction be yourself conspiracy 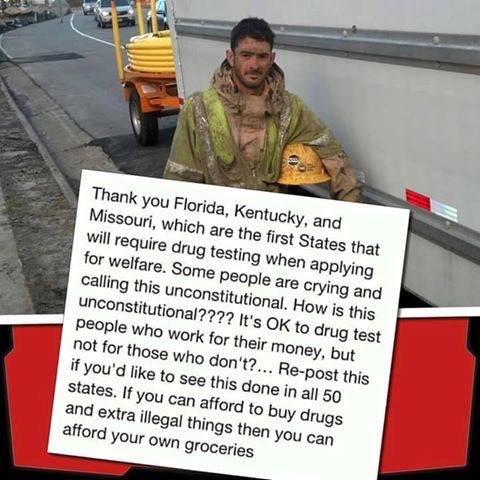 My mind must work differently.. because the first thing I thought of when I saw this .. was that some people’s lives may of been destroyed by drugs.. the reason they apply for help in the first place … what happens to them? Do we not show them any compassion because we disagree with the method they used to ruin their life? Is the test put in place to help them? or hurt them? (I don’t know, having only seen these kinds of posts via Facebook… so this is a genuine question – is it to deny people financial help if they have drugs or is it designed to offer them help?)

Have you ever been to the bottom of your soul? Lost everything? Thought there was no way out, no hope, no future? I haven’t resorted to drugs but I can understand why some people have reached in that direction (many people do it “legally” via addiction to anti-depressants and other pain-killers – like it’s “no big deal” because a medical practitioner originally prescribed it to them).. they might do it legally but they are still “drug-addicts”… still escaping pain & reality. I have empathy for both types, they both could use help – we could all use help from each other.

Maybe it’s not just about drugs that got my mind-ticking over this… “what next?” alcohol, cigarettes, junk food, gun-ownership, etc. (hey, all these things are “bad” too – the government wants some of these gone.. don’t they? or do they accept alcohol and tobacco industries because they make so much money from them, all the while campaigning ‘against’ them but never actually doing anything except increasing the ‘taxes’ on them as a way to try and make it ‘unaffordable’ but that’s not how addiction works.. so maybe it’s not a “bad” thing to screen for.. but to what end.. what next.. why.. what is the purpose?)

I remember when it was illegal here for us to have our own water-tanks, they wanted us all on “public water”. I thought it was ridiculous back then… and now, here it IS considered ridiculous with all the water shortages & droughts a few years ago, they are now encouraging water-tanks.. but once upon a time.. for half my lifetime, it was illegal… Some laws make no sense but we have to “obey”.

I understand that people are horrified that they think “their” tax money is actually going to drug-users and the like, they still have “us” against “them” mentality, they don’t see a possibility of helping others, they don’t see themselves as being addicted to drugs (because it was ‘prescribed’), we have moved to a society in the western countries where everyone is out for themselves… they don’t recognize they are also slaves of this system, they don’t recognize these people as doing the same thing they are – they are just “out for themselves” too – they just can’t recognize they are doing the same thing .. “we are good” “they are bad” .. and me, I think the “system” is what is bad… mass-control and mass-mind-control. We no longer reach out and help people, we judge them, or turn on the apathy – have no emotion at all – or want to see them suffer more.

They don’t see a brother or sister-in-need. They say “this is NORMAL”.. live like “us”.  Normal is bullshit.. there is no such thing as normal… it’s just “conformity”.. and we’re taught to conform through the education system, our society, media, laws & religion. For generations we have been told what is “socially acceptable” – what is “expected” .. what to say, what we’re not allowed to say, what to think, what we’re not allowed to think, how to “behave like everyone else”. Everyone wants to be good, law-abiding citizens, but they keep making new laws and deciding what is socially acceptable or not. That living your truth, speaking your mind.. that’s not normal.. you have to be a sheep; a zombie – do not think for yourself.. you have to be like “everyone else”.. but everyone else is wearing a god-damn mask too, because they want to be seen as “normal”. We’re playing this role where noone is actually being their true selves any-more – or even know what that is, because they are subjected to this brainwashing all their lives.

There is no compassion or empathy for anyone any-more. Generations of brainwashing as to what is “right or wrong” and we think we know so much. So they think these kinds of laws are good for everyone, punishing the “law-breakers”, punishing those who cannot live in this modern prison. Fining us for standing still. The government is corrupt. And because we have been conditioned to be “good, law-abiding citizens”, we’re allowing them to be corrupt, because we’re “afraid” to say no, to speak up when another freedom is taken away from us.

“What next?”.. what is the primary reason for this new method of control? What happens when they need to apply for welfare themselves one day because they lost their business, job, or got sick or whatever, and have to get this blood test – everyone will have to get this blood-test… but once this becomes the new “normal”… what next? … maybe everyone has to have this blood test – and maybe “forced vaccination”… you cannot get welfare unless you have been drugged by the state… once “this” becomes the new “normal”… they have total control.

We wouldn’t even NEED welfare if we were living as a community, if people still grew their own food and was sharing with their neighbours, if people had hearts again and didn’t allow friends to live in the streets, if people were no longer selfish and “too busy working” to see what this world is becoming.

What is the purpose of it.. is the drug-test to basically say “screw you – you do drugs, you now die on the streets and maybe have to resort to a life of crime to feed yourself and survive in this b.s. modern prison we are all living in.. or .. is it to determine who needs “help” and is aimed at helping them break-free from their addictions? (Like.. if they have to get drug-tested to also get a job, they aren’t going to get a job either – unless they get help or are aware enough to break-free on their own)

The biggest illusion I see is that people actually still think they are living in the land of the free. You are not free, we are all slaves.

But some of us are waking up.. there is hope.