Home  •  A man should not have dealings with evil [Sri Ramakrishna]

A man should not have dealings with evil [Sri Ramakrishna] 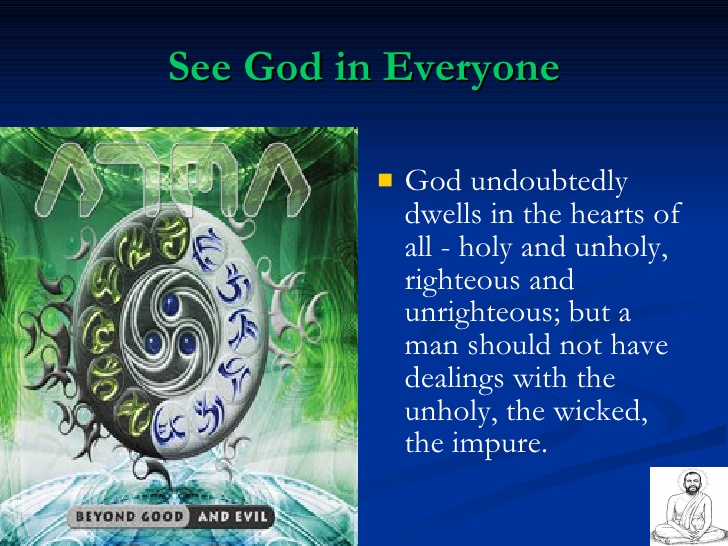 The master is talking to his disciples: Let me tell you a story.

In a forest there lived a holy man who had many disciples. One day he taught them to see God in all beings and therefore to bow low before them all.
A disciple went to the forest to gather wood for the sacrificial fire. Suddenly he heard an outcry: ‘Get out of the way! A mad elephant is coming!’
All but the disciple of the holy man took to their heels. He reasoned that the elephant was also God in another form. Then why should he run away from it? He stood still, bowed before the animal, and began to sing its praises.
The mahut (handler) of the elephant shouted: ‘Run away! Run away!’ But the disciple didn’t move.
The animal seized him with its trunk, cast him to one side, and went on its way.
Hurt and bruised, the disciple lay unconscious on the ground. Hearing what had happened, his teacher and his brother disciples came to him and carried him to the hermitage. With the help of some medicine he soon regained consciousness.

Someone asked him, ‘You knew the elephant was coming; why didn’t you leave the place?’
‘But,’ he said, ‘our teacher told us that God Himself has taken all these forms, of animals as well as men. Therefore, thinking it was only the elephant God that was coming I didn’t run away.’
At this the teacher said: ‘Yes, my child, it is true that the elephant God was coming; but the mahut God forbade you to stay there. Since all are manifestations of God, why didn’t you listen to God in the mahut?’
In the same way it is said in the scriptures that water is a form of God. But some water is fit to be used for worship, some water for washing the face, and some only for washing plates or dirty linen. This last sort cannot be used for drinking or for worship.

In like manner, God undoubtedly dwells in the hearts of all — holy and unholy — good and evil — righteous and unrighteous; but a man should not have dealings with the unholy, the wicked, and the impure. He must not be intimate with them. With some of them he may exchange words, but with others he shouldn’t go even that far. He should keep aloof from such people.

A disciple asked: ‘Sir, if a wicked person is about to do harm, or actually does so, should we keep quiet then?’
Master: A man living in society should make a show of anger to protect himself from evil-minded people. But he should not harm anybody in anticipation of harm likely to be done him.

Pour life, love, and interest into this affirmation, and you have chosen happiness.