Alternative Titles: Jehovah, YHWH. Yahweh, the god of the Israelites, whose name was revealed to Moses as four Hebrew consonants (YHWH) called the tetragrammaton.

The Tetragrammaton or Tetragram is the four-letter Hebrew word יהוה‎, the name of the biblical God of Israel. The four letters, read from right to left, are yodh, he, waw and he. While there is no consensus about the structure and etymology of the name, “the form Yahweh is now accepted almost universally” ~ Source 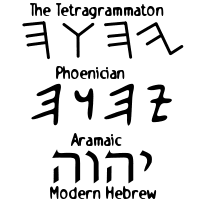