on May 3, 2013 IN Book Notes
be yourself books confidence law of attraction LOA mindset book thought vibration William Atkinson (author) 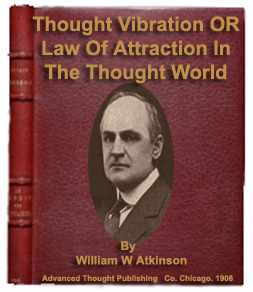 SOME time ago I was talking to a man about the Attractive Power of Thought. He said that he did not believe that Thought could attract anything to him, and that it was all a matter of luck. He had found, he said, that ill luck relentlessly pursued him, and that everything he touched went wrong. It always had, and always would, and he had grown to expect it. When he undertook a new thing he knew beforehand that it would go wrong and that no good would come of it. Oh, no! There wasn’t anything in the theory of Attractive Thought, so far as he could see; it was all a matter of luck!

This man failed to see that by his own confession he was giving a most convincing argument in favor of the Law of Attraction. He was testifying that he was always expecting things to go wrong, and that they always came about as he expected. He was a magnificent illustration of the Law of Attraction – but he didn’t know it, and no argument seemed to make the matter clear to him. He was “up against it,” and there was no way out of it – he always expected the ill luck. and every occurrence proved that he was right, and that the Mental Science position was all nonsense.

There are many people who seem to think that the only way in which the Law of Attraction operates is when one wishes hard, strong and steady. They do not seem to realize that a strong belief is as efficacious as a strong wish. The successful man believes in himself and his ultimate success, and, paying no attention to little setbacks, stumbles, tumbles and slips, presses on eagerly to the goal, believing all the time that he will get there. His views and aims may alter as he progresses, and he may change his plans or have them changed for him, but all the time he knows in his heart that he will eventually “get there.” He is not steadily wishing he may get there – he simply feels and believes it, and thereby sets to operation the strongest forces known in the world of thought.

The man who just as steadily believes he is going to fail will invariably fail. How could he help it? There is no special miracle about it. Everything he does, thinks and says is tinctured with the thought of failure. Other people catch his spirit, and fail to trust him or his ability, which occurrences he in turn sets down as but other exhibitions of his ill luck, instead of ascribing them to his belief and expectation of failure. He is suggesting failure to himself all the time, and he invariably takes on the effect of the auto-suggestion. Then, again, he by his negative thoughts shuts up that portion of his mind from which should come the ideas and plans conducive to success and which do come to the man who is expecting success because he believes in it. A state of discouragement is not the one in which bright ideas come to us. It is only when we are enthused and hopeful that our minds work out the bright ideas which we may turn to account.

There is no such thing as chance. Law maintains everywhere, and all that happens happens because of the operation of Law. You cannot name the simplest thing that ever occurred by chance – try it, and then run the thing down to a final analysis, and you will see it as the result of law. It is as plain as mathematics. Plan and purpose; cause and effect.

The Law is in full operation whether you know it or not – whether you believe in it or not. You may be the ignorant object upon which the Law operates, and bring yourself all sorts of trouble because of your ignorance of or opposition to the Law. Or you may fall in with the operations to the Law – get into its current, and Life will seem a far different thing to you. You cannot get outside of the Law, by refusing to have anything to do with it. You are at liberty to oppose it and produce all the friction you wish to – it doesn’t hurt the Law, and you may keep it up until you learn your lesson.

The Law of Thought Attraction is one name for the law, or rather for one manifestation of it. Again I say, your thoughts are real things. They go forth from you in all directions, combining with thoughts of like kind – opposing thoughts of a different character – forming combinations – going where they are attracted – flying away from thought centers opposing them. And your mind attracts the thought of others, which have been sent out by them conscious or unconsciously. But it attracts only those thoughts which are in harmony with its own. Like attracts like, and opposites repel opposites, in the world of thought.

If you set your mind to the keynote of courage, confidence, strength and success, you attract to yourself thoughts of like nature; people of like nature; things that fit in the mental tune. Your prevailing thought or mood determines that which is to be drawn toward you – picks out your mental bed-fellow. You are today setting into motion thought currents which will in time attract toward you thoughts, people and conditions in harmony with the predominant note of your thought. Your thought will mingle with that of others of like nature and mind, and you will be attracted toward each other, and will surely come together with a common purpose sooner or later, unless one or the other of you should change the current of his thoughts.

Fall in with the operations of the law. Make it a part of yourself. Get into its currents. Maintain your poise. Set your mind to the keynote of Courage, Confidence and Success. Get in touch with all the thoughts of that kind that are emanating every hour from hundreds of minds. Get the best that is to be had in the thought world. The best is there, so be satisfied with nothing less. Get into partnership with good minds. Get into the right vibrations. You must be tired of being tossed about by the operations of the Law – get into harmony with it.

When you remember who you are and you know it deep within the core of your being, you will know and recognize your invisible connection to All That Is. And in so doing, joy, thanksgiving, and service will be the natural outpouring result from your grateful heart. When you work upon yourself and learn to know the creator within you, being of service to others will be natural for you.