“NONE of these vaccines are safe”
Tamika Morrow, Nurse Practitioner, discusses the documents submitted to the FDA for the COVID-19 (C19) vaccines created by Moderna, Pfizer, and Johnson & Johnson.

These are the links to the reports she spoke about that can be found on the FDA website:

Hello everybody, this is your favourite nurse practitioner Tamika Morrow. I’ve got some information I need to share that they are not sharing with you.

Still to this day we still have 99% people recover from Coronavirus.

This right here is one of the articles. This was published in Nature Journal. It’s talking about messenger RNA vaccines, published back in 2018.

… “a possible concern could be that some messenger RNA baed vaccine platforms induce potent interferon responses, which had been associated not only with inflammation, but also potentially with auto-immunity…” 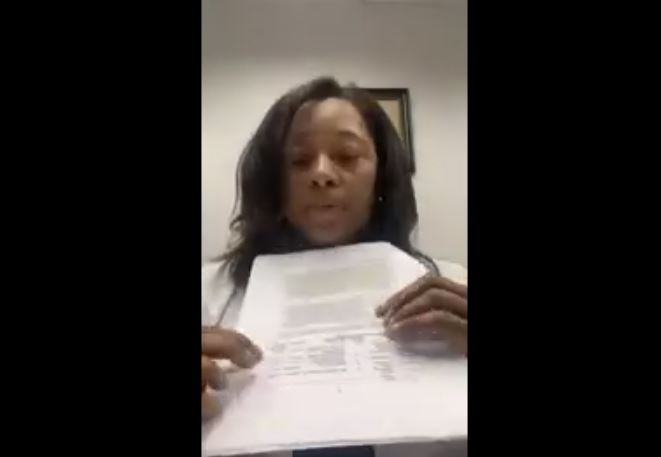 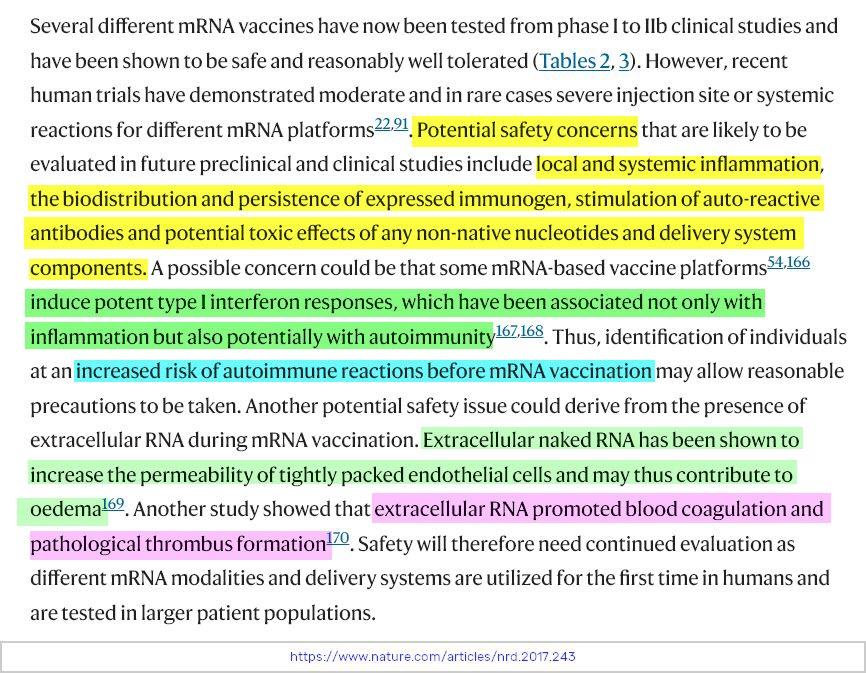 So, now look at more information that is not being told to you.

Right now, they’re trying to tell people that it’s only causing pain at the injection site or flu-like symptoms after the 2nd dose, and that it’s a “Safe Vaccine.”

Well, that’s not the truth. So, looking at their document that they had to submit to the FDA to get the Emergency-use Authorization, this contains some serious adverse events. 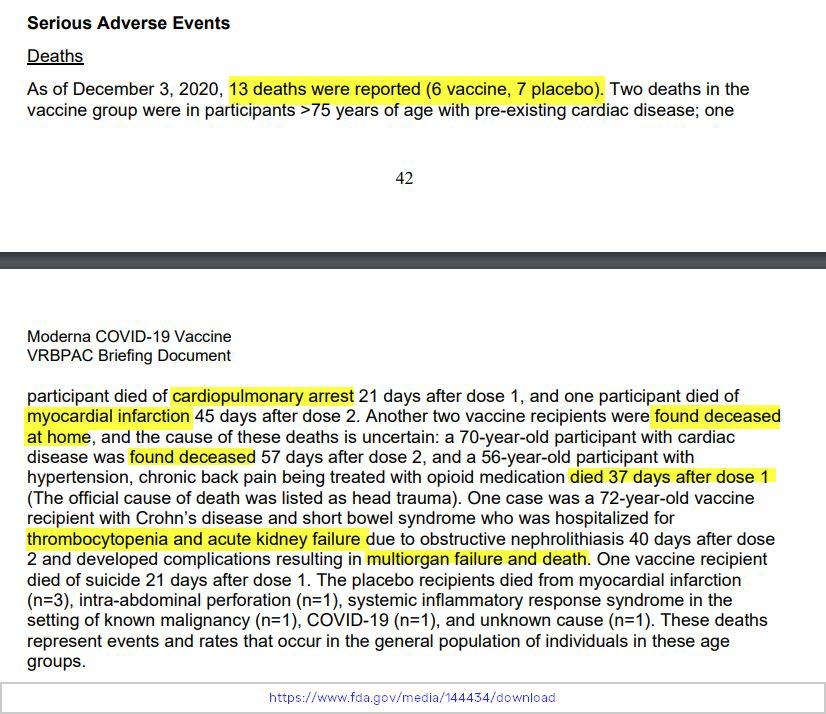 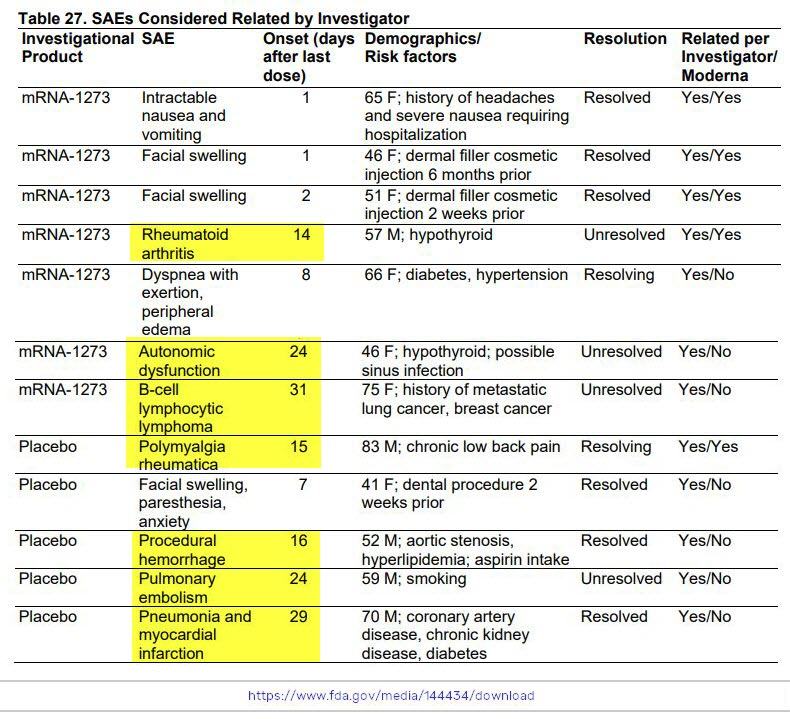 It says as of December 3, 2020, 13 deaths were reported. Six of those deaths were people who received the vaccine.

If you decide to get the vaccine, you’re part of an ongoing clinical trial, and people are dying from the vaccine.

Then there were other people who received the vaccine, that were having heart attacks, and other people here… someone developed rheumatoid arthritis, and guess what that is? An autoimmune disease. So the fact that they’re saying there’s no data that these mRNA vaccines can cause autoimmunity is a lie. Here we go right here. Here’s a patient who was documented to have developed rheumatoid arthritis, which is an autoimmune disease.

An investigator and Moderna themselves had to admit that it was because of the vaccine.

You also have someone who developed B-cell lymphocytic lymphoma. What is that? That’s Cancer. So someone developed cancer, they noticed this particular person who developed cancer had a history of cancer, but they’re not telling people who have a history of cancer not to take the vaccines. If you think about it, going back to Dr Drew Weissman, as someone who had safety concerns about the inflammatory response – inflammation is behind the majority of all chronic sickness and disease out here including cancer, so this inflammatory response, led to someone who received the vaccine getting cancer, you also have someone develop Pulmonary embolism – that’s that thrombotic formation – pathological thrombotic formation that Dr Drew Weissman referenced when asked about the safety concerns with messenger RNA vaccines. So people did develop Pulmonary embolism – what is that? That’s a blood-clot in the lungs, that can be lethal.

So this is like I said, is information that’s not being shared with the general public.

So then we go and look at Pfizer. Pfizer had to present the same type of report to the FDA in order to get Emergency-Use Authorization. This one is dated December 10, 2020. 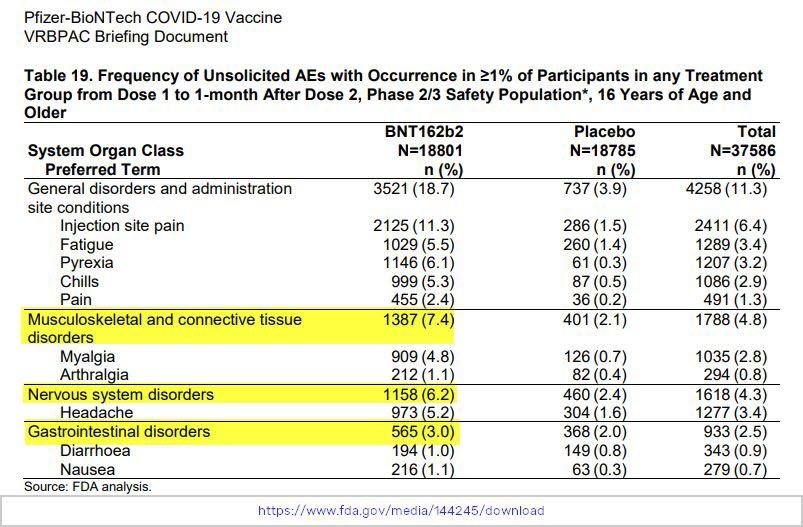 There were people from the Pfizer study, that also died when they got the vaccine, but there are also some people here that developed what they call Musculoskeletal and connective tissue disorders. They didn’t break it down with the exact diagnosis, but over 1,000 people developed that. You also had over 1,000 people who developed Nervous system disorders – so we’re talking about the nervous system, the neurological system, we’re talking everything from the brain to the spinal cord, and to the nerves. You had over 500 people develop Gastrointestinal disorders. These things are not being told to the public, and it’s really sad. From the Pfizer vaccine, they listed a total of 6 deaths, 2 in the vaccine group, and this is as of December, so I’m sure more have come since then.

But the two that died from Pfizer, “both vaccine recipients were greater than 55 years of age, one experienced cardiac arrest 62 days after the 2nd dose and died 3 days later, and then the other one died from arteriosclerosis after the vaccination”.

There are also people in their study that developed appendicitis (which if not treated can also be lethal), heart-attacks, and you even have people develop strokes.

Once gain, this is information that they are not putting out there and they’re not publicizing.

So what about the Johnson & Johnson and AstraZeneca vaccines. These studies that we’re looking at are really old and this is because coronavirus isn’t new, so they were — back when SARS-CoV-1 was out, they were trying to come up with vaccines back then, and at that time, they didn’t by-pass the animal trials, and go straight to humans, they started with animals.

And in the animal trials, they noticed a lot, not only was there immunopathology taking place, in one particular trial, here — this particular journal paper is titled:

So basically when the animals were given the vaccine, and then when they were exposed to the sars coronavirus, it caused severe lung disease and lesions in their lungs, to the point that they cautioned in proceeding to have a vaccine in humans. It was cautioned because of how the mice responded in this study.

They had another study where they used some ferrets, and in that particular study, once the ferrets got exposed to the coronavirus in the wild, a lot of them died, it became lethal.

Then there was another study, where they noticed the animals developed liver failure

So, this is real.

It may not be safe for using vaccines for any type of coronavirus.

The truth is none of these vaccines are safe. I don’t recommend anyone get these vaccines, there are too much other stuff out here that’s available, that can help you live, that can give you some kind of protection against the virus, and that don’t put you at risk for these complications.

In my state of Michigan, they had “north of 30 cases — north of 30 cases PER MILLION mind you — she thought that was reason to lock down the state! She thought that was reason to keep businesses closed, she thought it was reason to keep kids out of school, so if 30 cases PER MILLION is enough to take these drastic measures and that wasn’t even deaths – that was just cases, of which we know the majority of cases are mild. So if 30 cases per million was significant enough to shut down a whole economy, and cause all the other detriment that occurs – then surely, people who are suffering death from these vaccines, people that are suffering heart attacks and strokes, developing autoimmune disorders, and cancers, surely that has to be significant enough where the caution should be out there for the people to know that this vaccine is not safe and other drastic measures should be taken.

So you don’t have to fall prey to this. It doesn’t have to be a death sentence.

It’s also a farce and scaremongering tactic when they say that African Americans are disproportionally targeted.

Caucasians make up about 60% of the US population, and they make up 61.2% of the deaths.

So this whole disproportionate attacking “brown skin” and “Minorities” is a farce, it’s just another fear-antic so that you run and get this vaccine, but I highly caution you against it.

So we know certain things that are safe, works, so let’s do that first.

Stay away from the vaccine. It’s dangerous. But if you choose to do so, at least now you are empowered with information to make an informed decision.

We will attract relationships into our lives to learn our major soul lessons. For instance, if you have no boundaries, you’ll attract parasitic people into your life, until enough becomes enough and you learn to say no. Once your no gets really strong it will be impossible for parasitic people to parasite off you. You simply won’t attract these types of people into your life.