Boris Johnson’s father on the Depopulation of Millions by 2025

Between statements by Stanley (father of former PM Boris Johnson) and Boris himself, it seems the Population Control & Depopulation theme runs through the family veins.

Many clips from Stanley & Boris Johnson in regards to Population Control, Depopulation, and the underlying detest they have for the “lowly humans”. (01)

In 2012, Stanley Johnson, the father of former British Prime Minister Boris Johnson thinks it would be “ideal” to Reduce The Population Of The UK From 68 Million To 15 Million By 2025.

At 80 years old, he has written dozens of books including:

Stanley Johnson has also worked for the World Bank and the European Commission as a senior officer for the Environment of which Population Reduction seemed to be the only solution – which ties into the UN Agenda 2030, Club of Rome, and the whole dystopian globalist population “extermination and control” deception. (02)

In 2007, Boris published an article on his own blog entitled Global over-population is the real issue.

In September 2019, at the UN assembly, he literally starts the narrative by condemning “anti-science / anti-vaxxers” (just in time for COVID) and in the very next breath talks about nanotechnology, AI, neural interface technology, genome sequencing, smart cities, and an Orwellian world, “designed for censorship, repression, and control”. I mean, seriously!? (03) (04)

In 2020, in response to SARS-CoV-2 / COVID-19, there was the whole euthanasia debacle with the suppression of early treatments, isolation and negligence of the elderly, and the bulk-purchasing and over-prescribing of morphine, Midazolam, and Remdesivir, and you know all the other atrocities. Who needs a bioweapon when you can get the job done with the ‘cure’?

And in 2021, he jokes that we can “feed some of the human beings to the animals, although it might make them sick” in response to a question on re-wilding by Chief Executive WWF UK, Tonya Steele on a climate press conference. 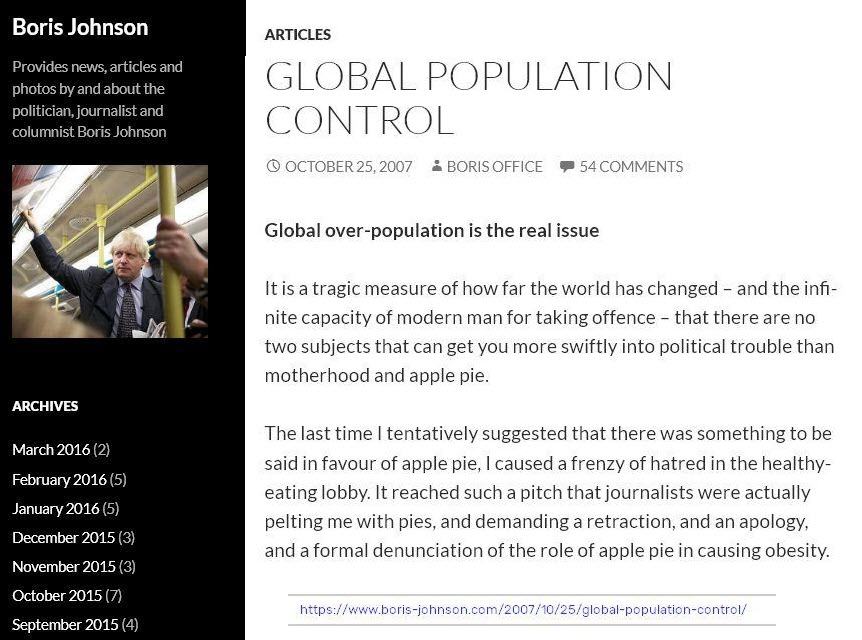 Boris jokes(?) “you could feed some of the human beings to the animals, although it might make them sick”

Boris Johnson’s father on the Depopulation of Millions by 2025

World Population and the United Nations
Challenge and Response 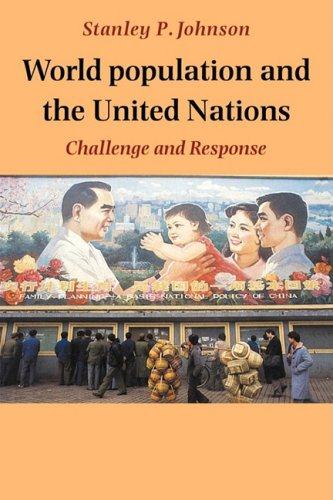 “First published in 1987, this book is about the challenge posed by the unprecedented growth of the world’s population and the response that has been made to that challenge by the United Nations and its system of agencies.

A substantial part of the book is devoted to discussing the actual achievements, in terms of demographic policies and falling birth rates, which have been realised in different parts of the developing world.

At a time when there is a good deal of criticism of the United Nations and its agencies, this book makes it clear that here at least is one area where the world organization is continuing to make an important contribution towards the solution of the most important problem of our time.“

World Population and the United Nations

You caught that last bit right? “A book that praises the work of the United Nations and its agencies on its success at reducing the population!” Un-fucking-believable.

Introduction
1. the rise of concern
2. The breakthrough in the Untied Nations
3. The role of the agencies
4. Four reports
5. UNFPA: the early days
6. The World Population Conference, Bucharest, 1974: preparations and general debate
7. The World Population Plan of Action
8. Falling birth-rates: Asia, Latin America, Middle East and Africa
9. Evolving perceptions
10. The International Conference on Population, 1984
11. China, the United States and the United Nations
12. Postscript and conclusions
Notes
Index. 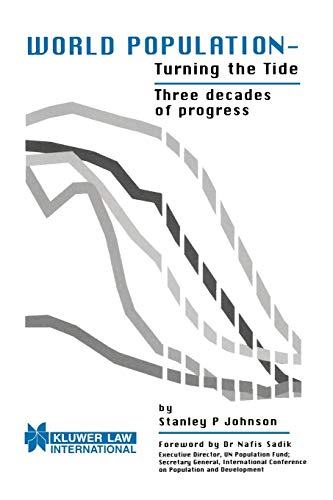 This work recounts the successful story of national and international approaches to the population question from the 1960s to the present, and examines the progress made in reducing rapid rates of population growth and high levels of fertility.

It describes the evolution of national population policies by governments, their aims, successes and shortcomings, and explores the emergence of international agencies seeking to reinforce and underpin those commitments.

This study draws on documents and sources, and assesses the achievements of the 1974 Bucharest World Population Conference, the 1984 International Conference on Population in Mexico and the several major national and international initiatives that followed them, up to the 1992 UN Conference on Environment and Development in Rio.

The book examines the prospects for a new international consensus in population, and considers the preparation for the International Conference on Population and Development in Cairo in 1994. The text is supplemented with annex materials. 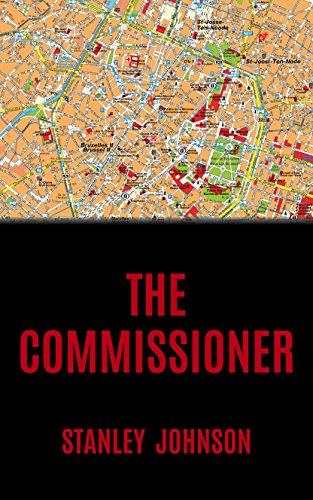 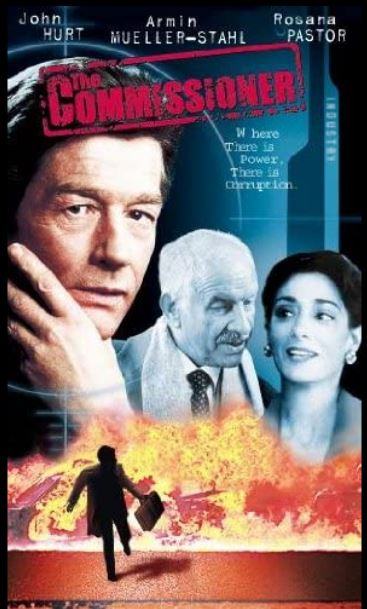 Book: ‘Pesticides are designed to kill. Unfortunately, they don’t know when to stop…’ Once a rising star of the Westminster firmament, his career was on the wane and his marriage heading for the rocks, when Morton was nominated as the British member of the European Commission. Suddenly the corridors of European power are a battleground of political bureaucrats and big businessmen dealing in deadly poisons.“

Film: “In his job as Commissioner, Morton receives information about a huge German chemical company that is supposedly manufacturing nerve and biological weapons, and is about to merge with a British company. Everyone is all for the merger, but Morton delays it. He is given compelling documents from a former worker at the plant. The investigation leads to some shocking information.“ 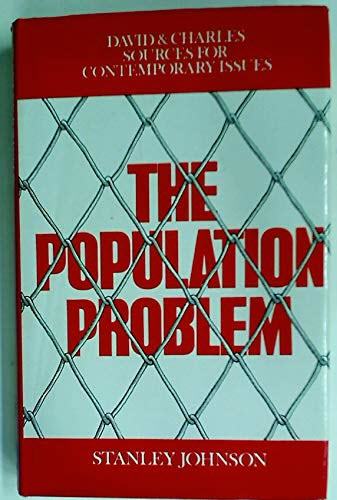 The Virus & The Marburg Virus

‘The Virus‘ (a 2020 update of ‘The Marburg Virus‘ comparing Marburg to COVID-19 and that the world needs to be ruthlessly focusing on an antidote or vaccine), 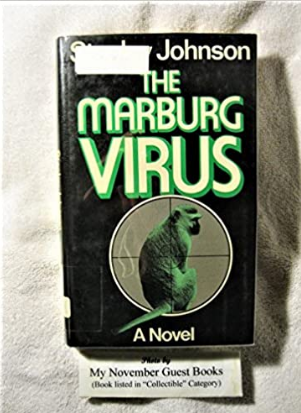 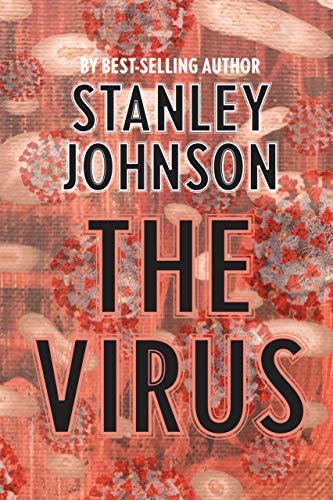 “Initially published in 1982 as The Marburg Virus, Johnson’s The Virus reveals uncanny parallels with the current corona virus: the outbreak of a mysterious and deadly disease, the origins of which are traced to a medical student infected by a green monkey. It features an epidemiologist as its hero and a desperate search for a vaccine…
In the afterword to his re-released The Virus Johnson, 79, says, ‘Will the fight again COVID-19 be as successful as my fictional hero was in fighting the Marburg Virus?…Thinking back to my own book, and its eventual happy ending, I can’t help feeling that Governments around the world, our own included, need to be ruthlessly focussed on the search for an antidote or a vaccine. Without in any way diminishing the importance of precautionary measures of containment or mitigation, mass immunization would surely prove a crucial factor in stopping the spread of COVID-19 or in preventing further outbreaks, e.g. the “second wave” we are hearing about’.”

Not even going to get into the whole Marburg thing in this post, but the World Health Homicide Organization did an update recently:

Life without Birth: A Journey Through the Third World in Search of the Population Explosion 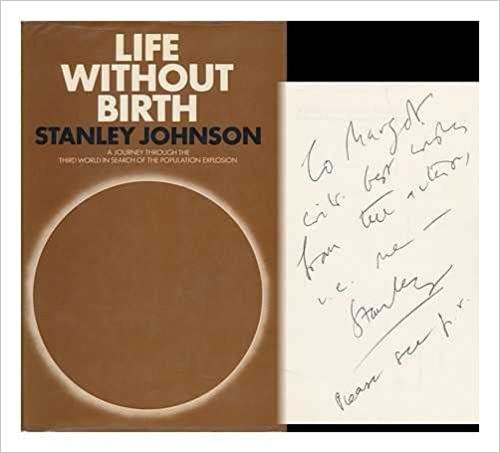 Stanley | The Politics of Population: Cairo (1994)

The Politics of Population: Cairo

This is an account of the 1994 Cairo International Conference on Population and Development and of its significance. From the Conference emerged a programme of action which aims to tie population policies to development and the role of women and to reduce the rate of population growth.

The book recounts what actually happened at the Conference, focusing on the central issues and the way in which attempts were made to reconcile opposing positions so as to achieve concensus on an effective programme of action.

It also takes a much wider perspective on the whole population debate, arguing that the Cairo conference represents a “quantum leap” in the way that the population issue is now seen.

The Politics of Population 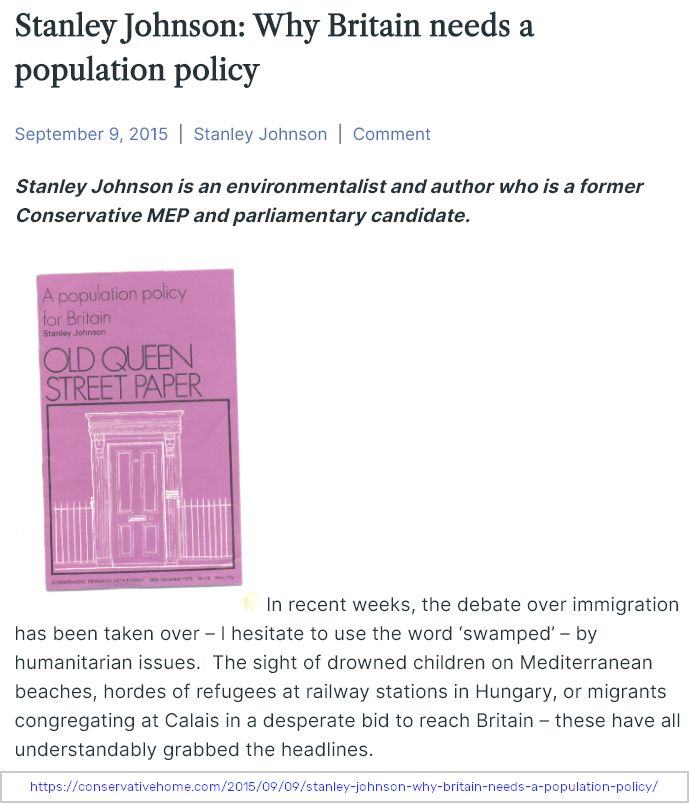 In the post, he calls on politicians to create a policy to deal with the population growth saying it’s long overdue and writes how the ONS (UK’s Office of National Statistics) suggest that natural growth in the UK is currently at its highest level since the so called ‘baby boom’ years of the 1960s. Crying “5.2 million more households by 2037!”

This natural change, the difference between the current birth rate and death rate, is also reported to be responsible for over 52 per cent of our population’s growth.

“The harsh truth is that, in vast areas of the globe, birth-rates remain much too high and per capita incomes ridiculously low.”

But as you’ll see below, whatever they’ve done between when he wrote this post in 2015 and when his son came to be Prime Minister and January 2022 – it’s reversed.

The globalists have indeed implemented their plan, at least, that’s what is “modelled”.

Obviously of concern here in their so-called population problem that they’ve been obsessed with for decades, seems to focus around fertility/birth-rates – so humans should really stay the fuck away from whatever they are trying to inject into us or put into the air, water, food, livestock, etc, away from their Abortion-narrative that they have overtaken, and away from their “pronouns” and gender-dystopian-confusion.

All of which seem to tie together – whatever it takes to fuck up the birth-rate gets massive funding and media attention. 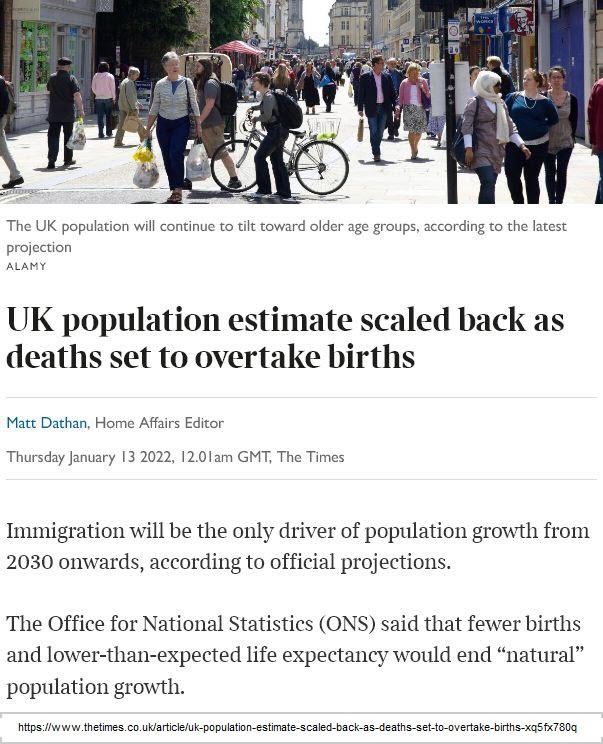 Immigration will be the only driver of population growth from 2030 onwards, according to official projections.

By 2025 there will be more deaths than births, leaving net migration as the only factor that raises the number of people living in the UK.

James Robards, from the ONS, said analysts had revised their assumptions in the light of new data on fertility and mortality. “Given a higher number of deaths and fewer births are projected, net international migration is expected to play an increasing role in population growth,” he said.

Overall, millions fewer people will be living in the UK by 2045 than expected.

What a curious family to be bred into…

It’s like “embedded into them” to think in this way. They are “bred” a certain way?

It seems they’re groomed into a psychopathic eugenics kind of mentality that involves themselves being the “chosen superiors” and that there is a necessity for culling of all “the rest” whom they label deplorables to protect their lifestyles, which they hold in higher regard than those they deem “down there” because they weigh up this value system differently-as in, this whole mentality of the rich being held “up there” and the poor being held “down there”-they don’t seem to value the human, the individual, for the unique traits each have – just seeing a sea of useless minions “beneath them”, just “too many”…

There is no value placed on the individual if they aren’t of a certain “breed”. There’s no value for the virtuous, or genuine caring, or love, laughter, the unique souls if you may… is it that they have never experienced it, never felt it? The authenticness of a human, compassion etc.

The easiest and most obvious way to formulate an idea is to visualize it, to see it in your mind’s eye as vividly as if it were alive. What you form in your imagination is as real as any part of your body. The idea and the thought are real and will one day appear in your objective world if you are faithful to your mental image.