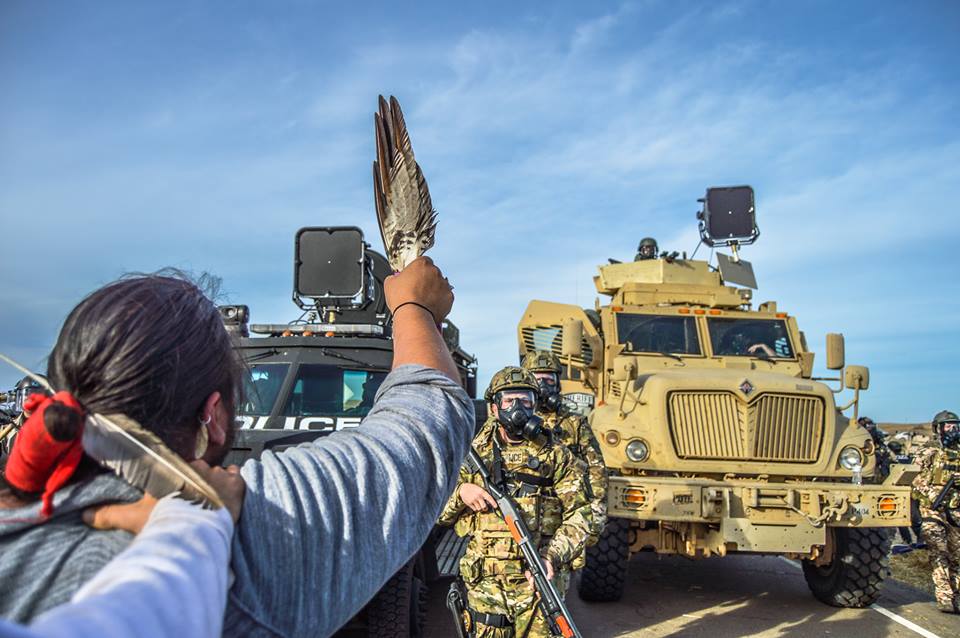 When the police work for the wrong people? Does anyone see a solution for this oil pipeline? It would be hard to work for a job that would go so against my own soul but I get that we all do it to some extent but when you see it happening like this, where you’re turning on unarmed protesters, you wonder whether it’s worth the pay-grade, like… do they have to turn off their soul to get their paycheck? Does it not matter what you do in the name of your job… like at the end of your life, will you be proud of your army/police actions.. the things you think you’re doing for the good of all but I’m watching wondering when will your soul take over… what goes through the hearts & minds of those on the other side of the fence in these (and many other) kinds of situations… “my government would be proud?.. my people…my country… my what… family? Like is there some part of them that thinks they are doing the right thing…what do they talk about around their dinner table when they come home – how intrusive these protesters are? how dare they want to protect their water? how dare they stand up for what’s right? I don’t get it.. do they numb themselves and turn their humanity-button off to become zombie robots that work for corporations who destroy & contaminate the lands. And these are the same people that would turn against any of us that decides to stand up for what’s right in a world full of that which insults our very beings.

I thought they were going to at least re-route it outside of the sacred & supposedly protected lands, re-route it away from the water? That’s not an ideal solution anyway – it’s still not the right direction that we could be taking, yet is it something that’s still being considered … something that can at least temporarily possibly suit both sides, or is that not an option either? Why do we still do this anyway… when there are already alternative solutions that are more long-term solutions rather than depleting the resources of the earth… yet alternatives aren’t even being entertained because of money. We can begin at any time to be the first generation to start to do right when better, safer, more permanent and sustaining solutions are already available.

We’re all guilty and believing how powerless we are, yet I see hope in these kinds of events … that could be some kind of catalyst of changes needed everywhere (and maybe that’s why this conflict is like this -if we all stand up together – they may see it as losing their power of future plans.. because I certainly see it as a way for people to actually start to collaborate).. We are all living out of alignment to our own souls because of growing up feeling like we can’t do anything to make the wrongs in this world right… I’m really hoping these guys on the front-line there, standing up for this one thing that is making it’s way around the world, that it at least inspires people to come together regardless of the outcome because more standing together / cooperating / helping each other is something so very missing from the core of so many areas of our lives – that which our soul’s can no longer tolerate.

Pfft.. I don’t know.. I’m starting to become a bit of a numb zombie myself, get all gung ho that we can make a difference in this lifetime and that “rightness” can be achieved over greed and destruction, then pretty quickly lose hope in my daily life and think there’s nothing we can do, that it’s already way out of control, we’re already indoctrinated to conform, be small, obey and never question decisions made by authority figures – even if it feels so very wrong.

These guys don’t deserve this, they are doing more than what I am doing to change what is not ok, and I hope those on the other side of the fence kind of develop some kind of conscience soon and walk over and stand on the other side of the fence with their fellow right-principled humans. This is just one revolution that could spark change everywhere because the attention it’s getting is causing a ripple-effect, helping people have the conversation, helping people stand together and even to start discussing where they stand and what they believe in and why they never question anything.. or even to start researching… “anything”… it’s a baby step in the right direction..

Nobody thinks they are indoctrinated. When you begin to dig-deep, you’ll realize you’ve been deeply influenced by multiple layers of beliefs. Each belief that we hold is an anchor holding us to the density of matter and form.