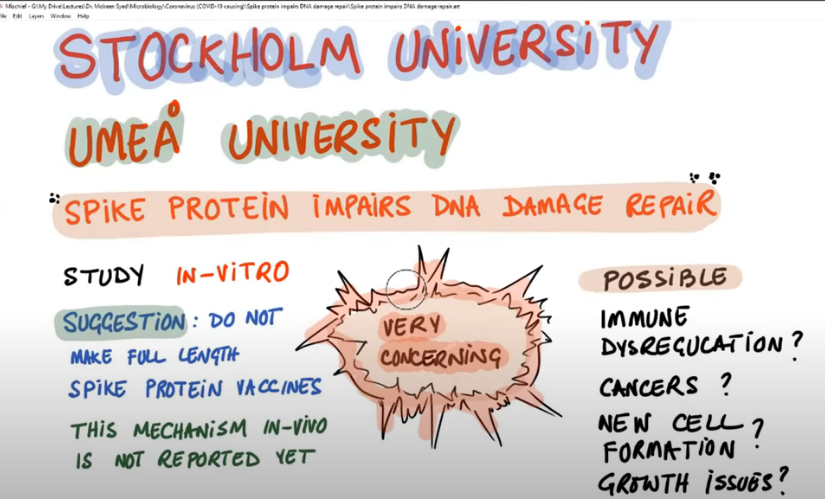 In this concerning in-vitro study the researchers show how SARS-COV-2 Spike protein and other proteins go to a cell’s nucleus and impair DNA repair and cell’s immune responses.

This study (01) – even though it’s in-vitro (and we will be 180 years old before anyone questions the vaccines enough to follow-up on actual human studies since everyone is in a “safe & effective” trance and ignores any ‘science’ or ‘injuries’ that casts any doubts on these experimental biologicals – is yet another possible explanation on why people are getting really serious injuries post-jab. (02) (03) (04) (05) (06) (07) (08)

Severe acute respiratory syndrome coronavirus 2 (SARS-CoV-2) has led to the coronavirus disease 2019 (COVID-19) pandemic, severely affecting public health and the global economy. Adaptive immunity plays a crucial role in fighting against SARS-CoV-2 infection and directly influences the clinical outcomes of patients. Clinical studies have indicated that patients with severe COVID-19 exhibit delayed and weak adaptive immune responses; however, the mechanism by which SARS-CoV-2 impedes adaptive immunity remains unclear. Here, by using an in vitro cell line, we report that the SARS-CoV-2 spike protein significantly inhibits DNA damage repair, which is required for effective V(D)J recombination in adaptive immunity. Mechanistically, we found that the spike protein localizes in the nucleus and inhibits DNA damage repair by impeding key DNA repair protein BRCA1 and 53BP1 recruitment to the damage site. Our findings reveal a potential molecular mechanism by which the spike protein might impede adaptive immunity and underscore the potential side effects of full-length spike-based vaccines.

Dr Been – Double Vaccinated – explains in depth in an easy-to-understand way what the study found and I highly recommend ANYONE – even those who don’t intend to get the jab – to watch it, download the study, and understand it. It may help save a life of someone you know or meet.

This is a scary publication, made even more scary in that it reminds me of some of the earlier material I’ve got in my research collection and how it may all be connected to those who are now getting aggressive onset cancer and other serious injuries (12) within weeks of taking the jab, and I don’t know if I’m over-thinking but it’s the first thing I thought of and I want to look into it more.

Some doctors are reporting that their patients who were in remission for years are suddenly having cancers spread throughout their entire body within weeks of the jab, (13) and I’ve seen reports of people who died of a brain tumor or had a sudden onset aggressive cancer that they never knew they had – despite the “pharma-funded fact-checkers” (14), “pharma-funded cancer charities” (15), “pharma-funded media” (16), and “Pharma-Funded Health Authorities” (17) (18) saying there is no link. Sorry but I tend to believe those who are “censored” now with everything to lose rather than those who are being paid a fortune to keep the “jab in all arms”, “ignore the victims” and “dismiss any science (19) that doesn’t fit their agenda” (20) campaign. (21). Clinical pathologist Dr. Ryan Cole described a significant increase in certain types of cancer (e.g. endometrial cancer) since the beginning of the covid mass vaccination campaign. (22) and German pathologists also noted the issue of post-vaccination immune dysregulation and sudden tumor growth in some patients. (23)

I recall coming across a patent that is eerily familiar – it was a controversial patent regarding the detection of two ‘cancer-modulating’ genes BRCA1 and BRCA2 (24) – something along the lines of when those have been mutated in some way, they dramatically increase the risk of breast and ovarian cancer. The reason it was controversial was something to do with patenting human genes and naturally-occurring associations between genes and diseases, and at the time I think it was rejected but now the world has shifted to some kind of evil and that may of been overturned in 2019 as I saw a letter from one of the labs trying to stop a particular amendment to Section 101 of the Patent Act which would change legislation in regards to patenting products & laws of nature, to which they referred to the previously denied patent as a major concern as to why they opposed the amendment. (25)

I have too many things open right now to dig deeper, and there is so many important things I’m trying to get uploaded that people aren’t aware of due to the evil censorship, (26) so I won’t try and find all the material right now but I will endeavour to look into it when I have more time and if there is some connection. If you are keen to look into it rather than wait for me, it will be amongst my uploaded research (I’d already started doing a little background research on it at the time and highlighted the important points in the documents before moving onto something else. (Search for Patent – DNA)

Dr Mikolaj Raszek – Same study – from the point of view from Genetics researcher.

This video discusses new surprise discovery (yet to be confirmed by other scientists) that SARS-CoV-2 full length spike protein can enter human cell nuclei and interfere with fixing of broken DNA damage. Authors of the study propose this might have been evolved in order to prevent genetic recombination required to produce antibody variety to successfully attack the virus. If true, and if this could have important implications for potential negative health outcomes and might require reconfiguration of vaccine design.

00:00 Dr Mikolaj Raszek, Phd from Merogenomics
00:09 The latest widest news in Molecular Microbiology
00:33 WHO? Swedish research shows spike protein enters nucleus in human cells (in vitro)
00:57 this is of course, biologically verboten (*German for STRICTLY FORBIDDEN)
01:04 WHAT? *Discovery* Spike protein inhibits proper fixing of broken DNA
01:18 Specifics: double stranded breaks where both strands are broken
01:33 HOW? Mechanism 1 suspected interference with BRCA1 gene product’s ability to repair DNA
01:48 Consequence: if BRCA1 is mutated though, then you have highest predisposition for Cancer development precisely because BRCA1 gene codes for proteins that fix DNA damage when sheared in half
02:14 Significance: Consequences are so great if true that it should be double checked, verified and reinvestigated
2:42 Call for a lot more studies: Revalidation
2:51 HOW? Mechanism 2 Spike also interferes with mysterious nuclear protein 53BP1 which may serve to prevent DNA breaks from re-ligating to other DNA sources ensuring 2 chromosomes don’t link together that aren’t supposed to.
4:21 HOW? Mechanism 3 Perhaps spike in Nuclei interferes with Immune cells’ mechanisms (eg.BRCA1 and 53BP1) and diversity of response to infections.
4:42 TAKEAWAY What if Spike protein evolved as a mutagen for DNA – what would implications be for a vaccine that’s primary focus was to produce Spike?
5:32 CONTEXT: Recent discovery that Spikes may circulate for months on end in Exosomes to different parts of the body and in theory enter cells well after the point of vaccination as COVID-19 mRNA vaccines update 16 discussed
06:15 CONTEXT: DNA gets 70k lesions/day /cell! But only 25 are double stranded shearing damages. Very, very important that we do not dismiss this study.
07:25 IMPLICATIONS: So within this context, what are the chances circulating spike proteins could enter and damage DNA and predispose to cancer? In cancer, it takes months for damage to accumulate and cause symptoms. Therefore…
7:45 IMPLICATION: Vaccine Safety Are vaccines “SAFE”? What is vaccine “Safety”? Only Time can/will tell.
8:07 IMPLICATION: Yes, Vaccines don’t produce dangerous clinical symptoms in the first few months BUT we don’t know what they do in very long-term basis so can we call them safe?
8:34 HOW? Mechanism 4 Vaccines use FULL length of spike protein thus produces whole protein in body. Prior to vaccinations some scientists mentioned that FULL protein length of Spike protein was dangerous
9:16 IMPLICATION: Antibody Dependent Enhancement (29) or ADE could occur with use of full length of Spike protein
10:27: AUTHORS’ RECOMMENDATION: Not to use full length of spike protein but only the Receptor Binding Domain or RBD portion for vaccines
10:41 Explanation: RBD
11:29: TAKE AWAY Vaccine Safety This shows how Vaccines are still uncharacterized on what they might be doing at the molecular level once injected in us.
11:52 Spike protein also uncharacterized post-infection (but learning lots now).

Explains another Swedish study which highlights the danger that the injection could block an action that repairs your DNA on a constant basis, then that could increase cancer-formation and other autoimmune issues. This video is explaining two different studies – the one above, and the other on 53BP1). (38)

These studies show that the spike protein impairs the DNA repair mechanism by about 80% in 2 different pathways (NHEJ & HR via inhibiting both he BRCA1 and 53BP1 genes). Jaxen says he was told that 53BP1 is called “The Guardian of the Genome” – it has been extensively demonstrated that aberrant expression of 53BP1 contributes to tumor occurrence and development. 53BP1 loss of function in tumor tissues is also related to tumor progression and poor prognosis in human malignancies.

Jaxan says that he checked the FDA package insert to see if the vaccines were tested for this, and found that Pfizer, Moderna, and J&J said the same thing. (39)