Home  •  Islam: The Religion and the People by Bernard Lewis

Islam: The Religion and the People by Bernard Lewis 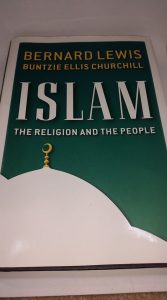 Excellent condition other than the top of the back-sleeve (see picture). No creasing or dog ears or fading, etc. Hardcover.

Islam: The Religion and the People by Bernard Lewis

"For some time now, two contrasting images have dominated debate in the Western world about Islamic attitudes toward war and warfare... One of them depicts the Muslims as a race of ferocious and fanatical warriors... with a sword in one hand and a Koran in the other... The other depicts Islam as a religion of peace... Both contain elements of truth; both are wildly exaggerated."

Lewis sees neither to praise Islam nor to blame it. Instead he strives to present the unvarnished truth about one of the world's great religions. Among his most interesting themes is that today's radical Islam has little connection to Islamic tradition.

So for those who want a brief introduction to Islam, this book will be a good choice.