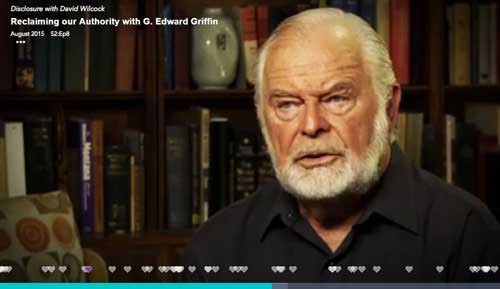 The prime directive of the education system is to teach people to be team-players & how to go along with the group, and not make waves, and you’re graded upon your ability to be a good citizen. Hammered into you, so that we accept authority. We don’t question authority; we worship the state & worship the leaders of the state. It’s a new religion: “collectivism”.

In today’s world most kids come out of school totally programmed to accept authority, and if you question authority, it’s somehow considered to be wrong/bad. With that mentality & programming, they are now totally corruptible.

Once a person – corrupt or not – is elected to office, now he’s ‘purified’ in the eyes of society – he’s ready to be accepted without question. He’s now a good person and you must respect everything he says. That’s what’s happening. If we’re going to turn our society around to be recognized as anything but programmed robots, we have to recognize what the problem is at first, we’re going to have to break away from this school system that is programmed to indoctrinate students, we have to question “that” authority. If you want students to start to question authority, you’ve got to question authority that says “no you mustn’t question authority”. So that’s where we start. It’s a long up-hill battle but the climb has already begun.

If you voted for that person, that also makes him a good person. That’s the thinking. The left/right politics and the left/right media are merely ploys to keep us content into thinking we have choice. We don’t even think of going outside those parameters, which is exactly where they want us. They want us inside those parameters – we don’t go outside the box – and everything will continue to go exactly as it’s been going up until now.

We reject power and so we lose. If we don’t have the power to dislodge those people with power then they are going to stay in those positions. You cannot overcome power without equal or greater power.

How can we be sure if we succeed at getting the power, that we don’t become just as corrupt and evil as the people we’re opposing? Can it be done? And how do we bring it about?

It can be done if we’re very clear on what our goals are – if everyone who is enlisted in this movement has a very clear mental picture of what we’re trying to achieve. A creed: “This, we believe”. We’re all on the same page – agree to a certain ‘statement of principles’. And one of those principles is that we cannot & must never use political power or legalised force of cohesion to deny any person their freedom, unless it’s to protect life, liberty and property. If we are clear on that, that those are the limits of legalised cohesion, then the risk of fraud and corruption is greatly reduced.

More info about this movement: freedomforceinternational.org