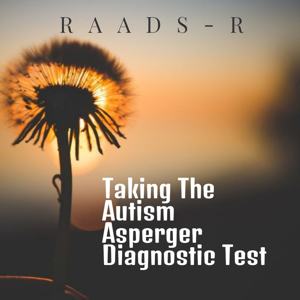 Time to add a new category to my blog [Autism Aspergers] because I can see that I’ll be researching into Autism/Apserger’s a lot and even though it seems I’ve always had it in some form (therefore the entire blog is the life of an Aspie to some degree), I think studies and chats specifically dedicated to the subject should have it’s own category on my blog.

The answer format was challenging because for at least a 3rd or more of the questions, none of the four choices available (always/never/only when under 16) were applicable to my answer which would be more along the lines of: “sometimes/only in certain situations/only with certain people” etc., and, because up until recently I had no clue I could be Autistic. I grew up not knowing why I was different but forcefully pushing myself through life oblivious. I struggled, but I thought it was trauma-based, and so was constantly working on “self-improvement’ and trying to heal my own trauma’s.

Here are my test results:

Looking at the female ASD scores compared to mine, I scored mostly higher than the average people who were already diagnosed with ASD so I’m really no longer in denial that I am an adult who escaped diagnosis, and frankly it validates so many situations I’ve had in my life.

Once I’ve finished going through how it validates a lot of the struggles and quirkiness which I’m sure I’ll spend a few months on, I also hope to get to a point where I’m understanding it a lot more and embracing my differences and celebrating them rather than always trying to figure out why I’m so different than ‘everyone else’.

I have tried to find a place where Adults can be assessed so that I can get an official diagnosis and there doesn’t seem to be much around, and if there is – it’s designed for children. Even without an official diagnosis I’m still convinced I have at least Asperger’s but it would be helpful to have support and also something other than a “Dr Google online test” to explain to my family/friends/future work colleagues. But further to that, I’m hoping to meet like-minds and feel a sense of my own ‘normal’ rather than constantly hoping what I just said or did didn’t freak someone out.

I have booked myself into a doctor tomorrow to try and get a referral to a psychiatrist that has an Autism test. Unfortunately my doctor is a 2-second wonder and may not be helpful in that regard but I’m going to try it anyway as this is as of right now, the main focus of my life.

I also took a social anxiety test last night and blew that off the scale as well, but I know that has been a result of feeling so out of place and different than others, that eventually I ‘gave up’ on trying and preferred to be alone with my interests so as avoid feeling awkward and uncomfortable or embarrassed or hated. I never realized that it was social fear because I termed it ‘preference for solitude’.

Just took another Aspie test online and my scores were:

I know the non-aspie score results were as a result of a lifelong working on myself to not chuck a tantrum when things don’t go my way and an avoidance of those who do not think like me, so I know that test results depend on where you are on your self-work too I believe.

Another test I did was at PsychCentral:

People with an autism spectrum disorder often have to cope with severe and sustained impairment in social interaction and the development of restricted, repetitive patterns of behavior, interests, and activities. The disturbance must cause clinically significant impairment in social, occupational, or other important areas of functioning.

You should not take this as a diagnosis of any sort, or a recommendation for treatment. However, it may be advisable and beneficial for you to seek further diagnosis from a qualified mental health professional soon to rule out a possible anxiety disorder.

If you see only the incomplete, the imperfect, the relative, the limited, these conditions will manifest in your life; but if you train your mind to see and realize the spiritual ego, the “I” which is forever perfect and complete, then harmonious; wholesome, and healthful conditions only will be manifested.