COVID-19: The Protocol That Kills

The Protocol That Kills: The family of Rob Skiba have written books and are currently filming a documentary and have collated the legal evidence as a warning to others about the deadly COVID Protocols.

Rob Skiba was murdered on October 13, 2021, by the deadly COVID Protocols. Rob and his family were well aware of the dangers of Remdesivir and Ventilators, so they requested Budesonide (a corticosteroid and widely-used asthma medication a.k.a. Pulmicort).

The medical staff refused Budesonide, gave him Veletri and Remdesivir against his wishes, and put him on a ventilator, as well as administering “100% oxygen” on a ventilator, which the post-mortem said had shredded his lungs to the point they did not even look human.

Even worse, these evil “trust-the-science-fiction” health-cult refused to allow his wife and son into the hospital and they had to try and advocate for him via phone calls and text messages.

Keeping families away from the hospitals allowed this whole dystopian “Covid-death” nightmare to happen to God-knows how many people around the world. It’s why the doctors, nurses, etc. stayed in Zombie Land.

Some hospitals put everyone suspected of “Covid” immediately on a ventilator, and most western-hospitals were told to administer the “only approved Covid-therapeutic”; the already known lethal drug Remdesivir, which ultimately raised the death numbers, which benefits only greedy psychopaths with their own agenda who have captured the medical industry.

The medical staff became “group-think protocol-followers” to a fake “Covid” diagnosis, and switched off their conscience, ethics, and critical thinking abilities to continue to get a wage. In the hospital world, it looked like a pandemic because, inside each hospital, they “created” a pandemic scenario based on their “pandemic” policy playbook.

No patient advocates allowed in Covid-Lala-Land.

Family could not accompany their loved ones in the hospital, and the medical staff were in “pandemic-psychosis,” blindly following a playbook because the authorities they “trusted” dictated via tabletops and group-think how doctors in the western world would respond to “covid-positive” patients. It was unfortunately the worst policy ever, under the guise of “pandemic,” to remove any patient advocates from the bedside.

There was no one to “watch over or question the care” in person to ensure they are getting everything they need, or to help educate these busy and stressed-out medical professionals out of the “corrupt-policy-group-think” about these deadly covid treatments, the fraudulent use of PCR to diagnose COVID, or the working treatments that had already been established around the world by April 2020.

Staff come into work, understaffed, under prepped, fully-mind-controlled and harassed by their administrators that constantly told them they are facing a pandemic and to follow new dictated government protocols to treat those who tested positive for Covid.

They have no contact with any voice of reason, logic, or access to the hearts of people who actually care for and love the patients. These brainwashed people also faked consent on forms, which would never happen in a non-covid-psychosis world. #WeWontForget

The Protocol that KILLS book

From his wife’s site: https://theprotocolthatkills.com/ :

A True Story and Urgent Warning

I never thought I would be writing the tragic and true story of how my husband suffered and died at the hands of a group of “medical professionals”—a totally callous and insensitive group who indiscriminately follow what I learned is a government-incentivized “protocol that kills.”

I cried many tears during the 40 days my husband was held captive by a seasoned team that was hell-bent on forcing “the protocol” on him—despite his and my insistence that he not be given harmful drugs and treatments and that he be provided with adequate nutrition so he could gather the strength he needed to heal.

After my husband’s needless death, my suffering and outrage grew even greater as I spent months working with a team of close friends, family, and medical experts who aided me in conducting a detailed analysis of the over 5,100 pages of hospital records that were finally provided to me after my husband died on October 13, 2021.

Although conducting my detailed investigation and writing this book meant having to relive the trauma, the team and I uncovered a massive number of extremely disturbing facts that made it clear to me that my husband did not die a natural death, but needlessly lost his life due to the opposing side’s incessant insistence that my husband must follow their mandated and inhumane “protocol that kills.”

Read more on her site and in her book preview: 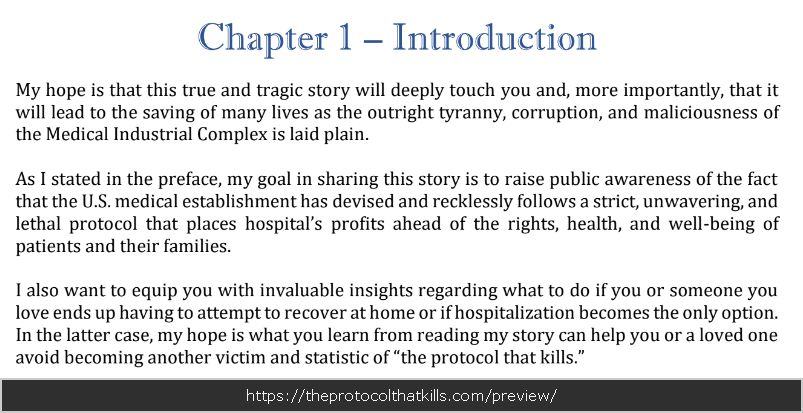 I found the interview above with Rob’s son because I stumbled across a really amazing video of Rob’s (that included a different explanation of Mark of the Beast, CERN, Gates, the Microsoft 666 patent, quantum dots, luciferase, Crispr, gene-editing, Bible prophecies, centralized monopolies – media, government, banking, etc., and how it all ties into transhumanism, and the elite’s main goal of obtaining “immortality,” etc.

(An interesting and plausible concept that I had never really considered beyond Google’s Ray Kurzweil and Yuval Noah Harari insane obsessions. “What do billionaires really want when they already have everything?” I usually think of their transhumanism / Human 2.0 obsession only in terms of how it can be used to enslave and control us further. Their giddy-wide-eyes and excited speeches are always talking about the merging of human and machine and the beneficial “Upgrades” we’ll have, but I usually look to it as a deceitful way to “sell it to us”; to get us on board to enslave ourselves and not dwelling much in the idea that they might actually “want” to hook themselves up to this dystopian idea and “become immortal”.)

Wondering what other interesting videos might be on offer, I went to the channel to see what other videos they had, and discovered he had 100s of videos seeking the truth about the world, and I discovered from the comments that he had died from the COVID protocols.

I don’t know about his view on aliens that he eventually gets into, (but what do I know really? Our whole world is a lie), but found the first part of video interesting as a different perspective on the world’s events, and it’s always interesting to see how others are connecting things together through their own lens and which research rabbit-holes they went down.

After finding out he died from the tyrannical covid protocols, I went to his websites and located his twitter account, which led me to discover both his wife and son had written books about their ordeal with the medical mafia to both honour Rob and warn the public about what is going on in the hospitals since “Covid policies” were implemented. They are currently creating a documentary, a memoir, and a legal brief. This video was recorded just two months prior to him starting to “cough” after returning from another seminar.

See also https://www.protocolkills.com/ – a separate and unaffiliated site I found today that features other people’s stories about the COVID protocols.

Other related potential reasons for this corruption: