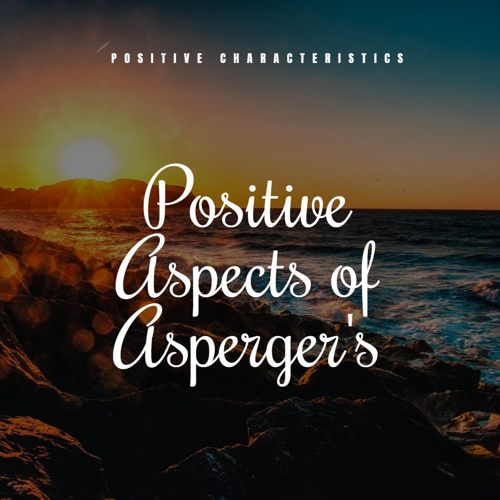 Found some articles about the Positive Aspects of Asperger’s and wanted to keep notes of the ones that I resonated with the most and saw as a good description of me. See the original articles here(01), here(02) and here(03).

We’re genuine, straightforward, and honest. No hidden agenda here. No double-meaning, either. No alter-ego, split-personality, or two-faced attitude. We don’t play head games or manipulate people. What you see is what you get. What we say is what we mean. We’re not going to BS you with little “white lies” just to make you feel better. If you’ve got a string of toilet paper hanging out of your jeans, we’re going to tell you. Basically, you can trust us.

We’re drama-free, in general, preferring calm, serenity, and stability instead. We don’t start crap, stir the pot, or pick fights. We’re not itching for the “excitement” that some people derive from being locked in conflict and rollercoaster relationships. We prefer stability. We’re generally logical. We don’t give in to trolls online. We try our best not to get sucked into family drama or catfights among friends. We’d rather leave the room…or the planet.

We pay exquisite attention to detail. The way our brains work is to recognize patterns and connect dots that ways that other people may not perceive. We can make some lightning-quick analogies between two seemingly vastly different concepts. We also don’t do things halfway; if we’re going to do it, we’ll do it, and if we’re not, then we won’t. If we decide (or realize) that something is worth our time, we’re going to give it our full effort. “Just good enough” is usually not “good enough” for us. Yoda from Star Wars might’ve had some Aspie traits: “Do or do not. There is no ‘try’.”

As alluded to above, we perceive things differently. Many of us view the world with both hemispheres of our brain engaged, and we process certain types of information through different parts of the brain altogether (or so the theories and some scientific research say). This means we process information a bit more slowly at times (although that’s up for debate; I think it depends on the type of information). We can also, in turn, offer this alternative perspective, contributing a unique viewpoint to a discussion or problem-solving session. We can think up new ideas, by approaching puzzles from an unusual angle. We tend to be very independent thinkers, not easily swayed by outside forces. Most of us use an interesting blend of unwavering logic and strong intuition to make decisions (and essentially, to live the rest of our lives as well).

We’re usually intelligent; some of us are literally hovering at genius level. Most of us are a hell of a lot more intelligent than we give ourselves credit for. Our IQs can be quite high, which is often one of the major driving forces behind our perceived “social awkwardness”.

We often have few or no children, which means our house will be quiet and our daily schedules and finances will be simpler. We’re odd and quirky, providing variety to an otherwise mundane world. We’re highly individual.

We’re rarely–if ever–intrusive. Our degree of sociability and social preference varies widely, but chances are good that the average Aspergian/autistic person is a lot more introverted than the average non-autistic/allistic person. Chances are pretty slim to none than we’re going to come barging in unannounced and uninvited and bang on your door. That might sometimes mean that you have to do a little more work to keep the relationship/friendship alive, but we try to make it worth it.

Many of us have a hidden talent up our sleeve. No, we’re not Rain Man, and we’re not all Temple Grandin (although some of us may wish we could be!). Our interests and talents run the gamut: philosophy, writing, psychology, foreign languages, business administration, systematizing, analyzing, technology or computer science, world religion, physics, gardening, etc. Sometimes we’ve got more than one. Sometimes we may not realize it; it might be laying dormant, ready to sprout at any time.

We prefer not to be in the spotlight, in general. This means that we probably won’t embarrass you much, if at all. Interacting with us also won’t turn into a constant competition. And we’re definitely not going to take the spotlight away from you or fight you for it, if you want it. We’ll certainly let you have it.

We don’t feel any pressure to conform or fit in. This takes a load off our shoulders, because we’re not having to “keep up with the Jones’s” (whoever the hell they are), and keep tabs on the latest fashions and trends. Our friends/family can be themselves, too, without added pressure or critique from us. We look beyond superficial physical beauty and weight, gender and sexual orientation, political affiliation, gender, ethnicity and religion, socioeconomic status, what zip code you live in or what car you drive, and other such labels and surface characteristics. We want to know what’s inside, beneath the labels. We want to know what’s at the core. We’ll either accept something or someone, or we won’t. When we decide we like or love something or someone, it’s not because they’re attractive or because we both vote the same way; it’s because we like, admire, look up to, or “gel with” the deepest centre of that person.

Common Strengths for Adults With Asperger’s

I know everyone is different with varying life experiences, but looking for benefits, for me it’s:

I’m in the process of writing a post about Asperger’s at Work which should be up sometime. I’ll link to it here when it’s done.