If this warning is irrelevant, please disable the syntax validation feature in the dashboard under General settings > Footnote start and end short codes > Check for balanced shortcodes.

Found a retracted paper that calls out BigPharma and then hunted down to try and find the author (Mahin Khatami) and history. Gosh I’m so excited by this paper – it’s like she’s written the “confession of the medical industry” as “population control” – everything is in there – it’s amazing. (No wonder it was retracted)… So grateful for her bravery.

This is the paper:

‘Deliberate Killing’ of the Weak

Here is the abstract that got my attention: 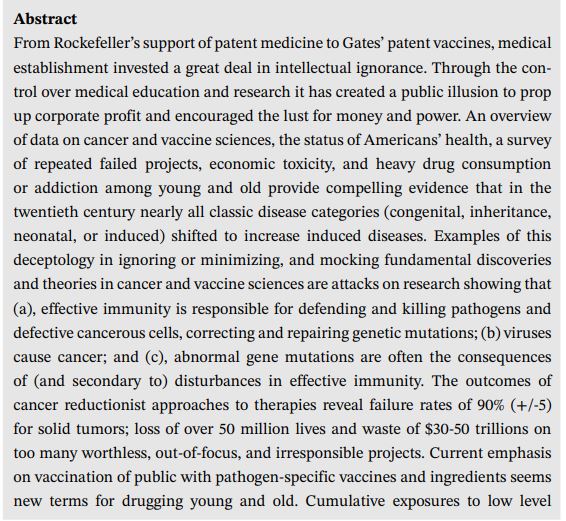 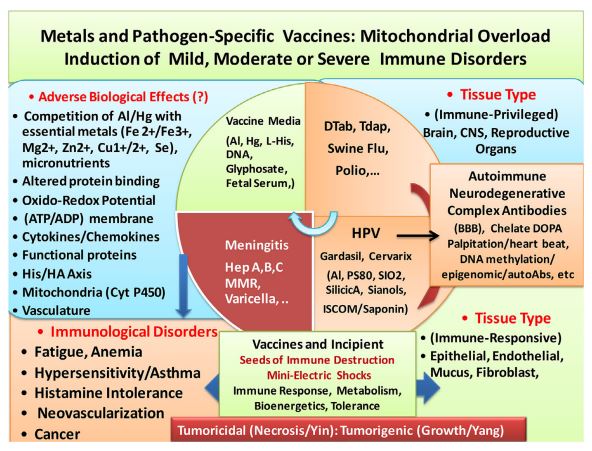 From Rockefeller’s support of patent medicine to Gates’ patent vaccines, medical establishment invested a great deal in intellectual ignorance. Through the control over medical education and research it has created a public illusion to prop up corporate profit and encouraged the lust for money and power.

An overview of data on cancer and vaccine sciences, the status of Americans’ health, a survey of repeated failed projects, economic toxicity, and heavy drug consumption or addiction among young and old provide compelling evidence that in the twentieth century nearly all classic disease categories (congenital, inheritance, neonatal, or induced) shifted to increase induced diseases.

Examples of this deceptology in ignoring or minimizing, and mocking fundamental discoveries and theories in cancer and vaccine sciences are attacks on research showing that:

The outcomes of cancer reductionist approaches to therapies reveal failure rates of 90% (+/-5) for solid tumors; loss of over 50 million lives and waste of $30-50 trillions on too many worthless, out-of-focus, and irresponsible projects.

Current emphasis on vaccination of public with pathogen-specific vaccines and ingredients seems new terms for drugging young and old.

Four generations of drug-dependent Americans strongly suggest that medical establishment has practiced decades of intellectual deception through its claims on “war on cancer“; that cancer is 100, 200, or 1000 diseases; identification of “individual” genetic mutations to cure diseases; “vaccines are safe”.

Such immoral and unethical practices, along with intellectual harassment and bullying, censoring or silencing of independent and competent professionals (“Intellectual Me Too”) present grave concerns, far greater compared with the sexual harassment of ‘Me Too’ movement that was recently spearheaded by NIH.

The principal driving forces behind conducting deceptive and illogical medical/cancer and vaccine projects seem to be:

An overview of accidental discoveries that we established and extended since 1980s, on models of acute and chronic ocular inflammatory diseases, provides series of the first evidence for a direct link between inflammation and multistep immune dysfunction in tumorigenesis and angiogenesis.

Vaccination of the unborn is likely to disturb trophoblast-embryo-fetus-placenta biology and orderly growth of embryo-fetus, alter epithelial-mesenchymal transition or constituent-inducible receptors, damage mitochondria, and diverse function of histamine-histidine pathways.

Captivated by complex electobiology of immunity, this multidisciplinary perspective is an attempt to initiate identifying bases for increased induction of immune disorders in three to four generations in America.

Future studies should focus on deep learning of complex electrobiology of immunity that requires differential bioenergetics from mitochondria and cytoplasm. Approaches to limit or control excessive activation of gene-environment-immunity are keys to assess accurate disease risk formulations, prevent inducible diseases, and develop universal safe vaccines that promote health, the most basic human right.

Highlights from the Paper:

A closer look at the current disease status of three to four generations in America, demonstrates that the major disease categories that are clinically, pathologically, and symptomatically identified as congenital, hereditary, neonatal and induced diseases have been shifted to increase the population toward induced diseases (Figures 1, 3–5). Integration of the scattered data on epidemiological, environmental, clinical and basic research on developmental biology, inflammatory diseases, cancer and vaccine sciences, treatment options are outlined below:

The medical system seems to have lost its soul to the power of blood (dark) money in the 20th century. Rockefeller Patent Medicine and Gates’ Patent Vaccines altered definitions of health and philanthropy. Health definitions changed from the absence of disease to management of the disease by drugs/vaccines.

Definitions of philanthropy have changed from doing good deeds to benefit society and humanity, to investing in diseases to benefit the investors. Disease investors and venture capitalists (‘philanthropists’) are giving more to their tax-deductible foundations with the goal to collect a lot more! The overall outcomes of ‘philanthropists’ involvement in collaboration with Big Pharma and governments on public health projects, particularly cancer and vaccines may be summarized as: 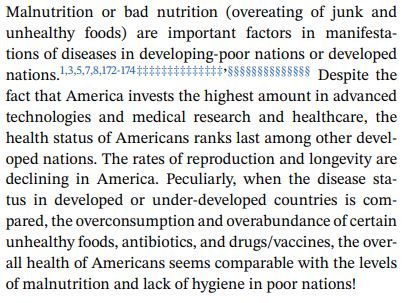 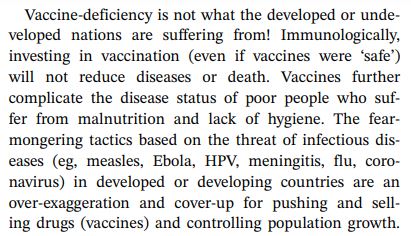 Evidence was presented that:

Our universe can offer a lot more untapped resources to afford a larger human populations without the need to destroy and cause the extinction of human beings by inducing infertility and diseases to control population growth and shorten life span, as well as to continue to spawn a compliant and docile, drug-dependent work force who can be eliminated at the push of syringe should they become expandable to their elite masters.

It is a horrifying thought to choose between the less of the two evils for humanity; killing and destroying weaker nations by man-made weapons under fabricated reasons for creating wars, or destroying public health and controlling the population by weaponizing cancer or over-vaccinating the public under intellectual deceptions and claims of “war on cancer” or “vaccines are safe.”

The real outcomes of either choice seem the same, transfer of wealth to warmongers, loss of precious lives and lack of respect and hope to save humanity.

These are challenging times for correcting the disease status that was created by Rockefeller medicine and continued by Gates vaccine. It requires a serious change of heart for policymakers and professionals, as well as a public awareness of the issues to help purge the deceptology in the cancer and vaccine sciences and hold the perpetrators of this deception responsible for fraudulent projects in the medical sciences. 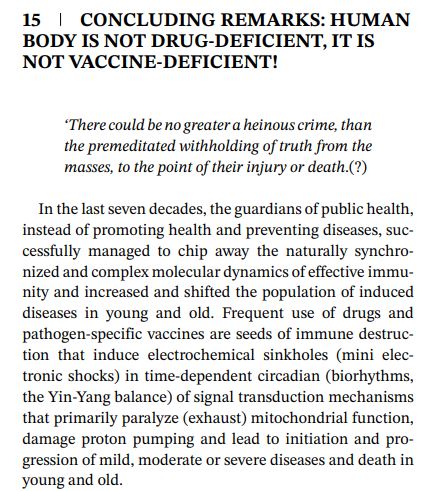 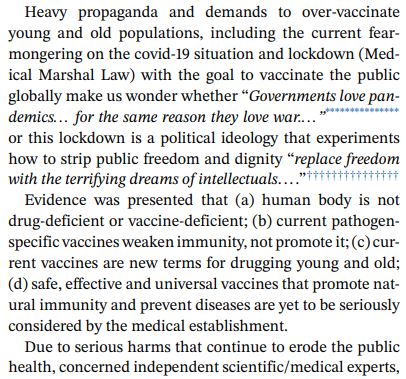 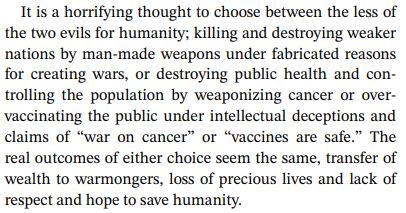 There’s no way they would allow a paper like this –

So I’m surprised it was approved to begin with, and not surprised at all that it was retracted – you just can’t call out these guys. Exciting to see that it had even reached peer-reviewed status to begin with given how corrupt the scientific journals and entire industry is. After listening to her interview (below), I can see she’s one of the White Knight’s of the world – really trying to get the word out about how corrupt these industries are.

Gosh I wish people cared about this more –

I feel like it’s kind of pointless writing how excited I am to find this study and the author and I just want to shout, discuss, highlight, take notes.. and that if I took the time to do that here, no one would care. The people we need to reach – don’t read. The others, the ones that might be able to read, trust bigpharma and will dismiss this paper because it’s retracted – without delving further to see what is going on behind the curtain.

I mean just wow. Every word of the PDF – it’s just.. it’s like she’s written the “confession of the medical industry” – everything is in there – it’s amazing.

There could be no greater a heinous crime, than the premeditated withholding of truth from the masses, to the point of their injury or death.

“Mahin Khatami did not kill herself”

I hope I can find her. She’s retired, and I can’t find any newer interviews since 2016, and the paper was published in Dec 2020. Did they retract it and now she’s gone forever? Is she still alive?

Video Description:
13 Dec 2016 • The National Safe Child Show-Addressing the issues that have allowed child abuse to become an epidemic. Our goal is to bring awareness and educate the general public as to what is really happening in our country. Listeners are exposed to the truth through the eyes of whistle blowers, victims and trauma professionals. Making the safety of Children our nations priority is essential to the stability of our future. Evoking Hope for Everyone!

My notes from the interview:

Four simple phrases — “Please forgive me,” “I forgive you,” “Thank you,” and “I love you” — carry enormous power.