You be the Judge – The Marita Murphy Story (documentary)

This documentary has been published on behalf of Marita Murphy. You be the Judge is a documentary about Marita Murphy, a child sexual abuse survivor. Marita details her life and her fight in the justice system and her difficulties being heard.

Marita giving her first major speech upon being recognised at the AMA the Australian Medical Association awards on April 29, 2022.

In Marita’s words: Hello world, l’m Marita Murphy. I was seven years old when l was sexually abused. Over forty years later, after my Mother was dead, and when I could no longer hold it in, I went to the Police.

When l first rang them l found l couldn’t utter a single word!! The Policeman kindly said “Lady I don’t know what’s happened to you but I think you need to see a counseller.”

I did that, but what I really needed was justice and to be heard.

What an honour to be recognised with this award and in a medical forum. Especially within a pandemic, I’m very humbled. Thank you Roderick. You have all worked tirelessly and I imagine rather thanklessly to keep our State and local communities safe over the last few years. I thank you all.

Child sexual abuse is not a sexy subject. So you can look at my personal story later should you wish. Googling Marita Murphy will show my self-produced documentary and listening to the Andrew Rule podcast, that is now one of four online. I’m sick of how it has dominated my entire adult life. Commencing at seven. So I’ll share some other stories of mine instead.

Historically my journey back has been most interesting. For instance, I googled where to go tonight and up popped a statue of Archbishop Mannix nearby. I’d only just discovered the back story of my mother’s first book. Published by her in Melbourne in the mid 40′. With the forward penned by the Arch Bishop. Her scholastic advisor Fr John Connellan suggested Daniel Mannix as the best placed person to do this job. He wouldn’t ask on her behalf, but would set up the meeting for her at Raheen. The answer was yes and Mums thoughts I read were that this helped take her book on converts in the complete opposite direction she wanted. As all the Catholics purchased it and they were not her target audience

My only and older by eleven years’ big sister was desperate to become a nurse. She started at the Pakenham and District Bush Nursing Hospital aged 14. She later went to The Mercy as Dads cousin a Nun was there. They stated she was immature and kept her on phones and admin instead of starting her nursing career. Mum intervened from afar and arranged an interview at The Alfred where she bloomed and Graduated.

At about the age of about eight I can recall being smuggled into the Nurses home and having my first champagne. They only gave me a thimble full and at that stage I didn’t really fancy it, but it certainly was a highlight growing up.

I later attended her graduation with Gran. Mum sadly being ill.

She told me recently how one day she was summoned to the Matron’s office, naturally she was concerned. As she stood in front of this fierce senior individual she was informed “I’ve had a call and your Father is dead, now get back to work”. I thought hospitals where places of compassion! I was ever so glad to have gone into the horse racing industry when I heard this story. She took a boat to WA and did midwifery. Miriam married and had seven children became a Mother craft nurse and worked nights in geriatrics and was Mother of the year in Perth in 1994 going to Government House to get her award.

To date I’ve never won anything and as my children reach adulthood and need me less I was beginning to think my future was behind me. Then I recalled the promises I’d made to myself as a youngest growing, or struggling up and I opened the Pandora’s box. WOW.

Survivors describe this childhood trauma as holding a beach ball underwater, usually for decades. Eventually you get tired and let it up, where everybody sees it and you can’t change your mind and push it under ever again.

That men protect women and children is a fairytale fantasy fallacy farce! Only Good Men do and I’m asking them to do more. In racing I say I’m conducting research into how many geldings there are. They literally scatter when they see me coming. It’s so pathetic. Is a signature or a share of my situation to much to ask? & usually they all love gossiping too.

Fancy being over 100K out of pocket for merely telling the truth? I’ve no education, career nor superannuation as a result of the crimes committed against me as a child. Mum was threatening me with “Winlaton” as a preteen. Home for “Bad girls”. I ask, “what made them bad”? It’s an adults job to protect innocent children. Ask yourself am I doing enough?

My friend Chris Pianto, (whose father played for Geelong) shot himself in the leg to be heard. Oh, it was only vanilla offending. His trauma was no one listening and the very real concern of his younger brother now going to his old college. As a result of his radical actions and after many years all the other perpetrators victims came forward. Chris chose NOT to have his own children (something I hear a lot) he has cancer AND to this very day STILL, some nearly 30 years on has not been awarded compensation for being raped at school by a convicted pedophile.

No Politician to date has responded to me in any meaningful way. Hang your heads in shame. People applaud our sole female PM for calling the Royal Commission into CSA and I’m eternally grateful she did this and that it didn’t collide with Covid. Fact is it was never really about children, he attacked her unions, and she counterattacked his church. The recommendations have hardly been adopted, they include a thing called a “scheme” and it was not for girls and I sadly say my advocacy in talking to stranger’s reveals “every second woman”.

We have had enough. I’m, or I was a pretty traditional woman. Happy to follow decent men. The self-appointed head of the family etc. No more. I rose up against the rising tide of domestic violence in the family home. For these actions there can only be ONE I’m sorry. I’m included sadly, having just ended a 37-year marriage. He thought the marriage certificate meant he owned me, and decided if it was okay if I had a voice or not, and yes he’s a good bloke.

Life is to short and we all only get one. In 60 years on this earth, I’ve only just realised I’ve pretty much suffered 55 years of male dominance, violence and control. There is nothing domestic about violence.

As busy parents yourselves please pay attention to WHO pays attention your children. I kept our boys as safe as our girls growing up, not really realising the importance. Single parents are so vulnerable and they may not understand as they may struggle with the daily battle of life. Pointing this out. Maybe in the form of “she had big blue eyes and long brown hair, I just had to have her, so I married the Mother.” I could tell you stories all-night that you just wouldn’t believe true, that sadly are.

Mental health issues, I traversed this system with my son when he was 18 approx. 12 years ago. Horrendous. I got to the point where I thought if I can keep him alive I’ll consider that success. He had been stable in a country town far from Melbourne with no car. He needed a repeat script of the medication that had kept him well for two years. He got himself to a GP clinic on foot to be told you’ll need a referral from your treating psych who was based in Prahran. Later he ended up outside our family home at 6am on a Sunday. He was scary we were scared, two young siblings and a banged-up father who’d just been released from the Royal Melbourne after a month. I called 000, and the story got much worse. But later I realised this preventable saga had unfolded during Mental Health week.

Finally, me coming from Ballarat know sexual predators need enablers for their criminal actions. Imagine this fact, mine were three, male Supreme Court of Appeal Judges who awarded me 50K sight unseen. On the many successful outcomes for male victims now getting 500K would’ve been insulting. The State of Victoria via the Police farce would do nothing for me and when I stepped up and tried to do it myself I was very heavily penalised. Are you all aware of the conviction rate in the Victorian state today on reporting rape?

Rape, don’t take it lying down …

Today? Well the petition to release The Woods Report went to the office of the Australian Attorney General, one unchristian Porter

It’s vital I enjoy this journey, as it’s my life. So lovely to be here and thanks for listening

All that we ask of the brethren, is that you take your feet off our necks. 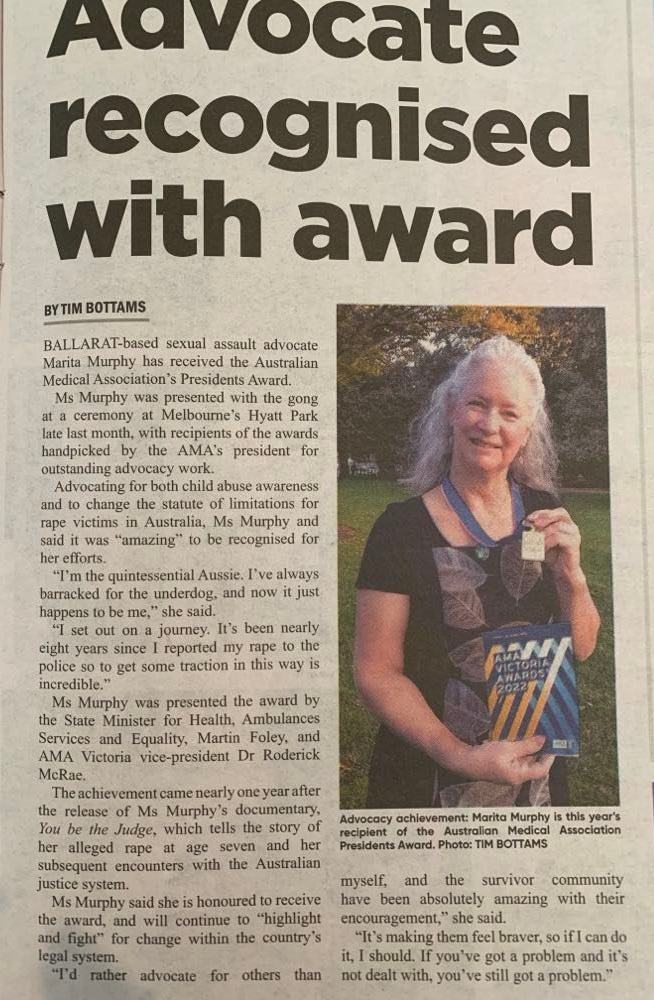 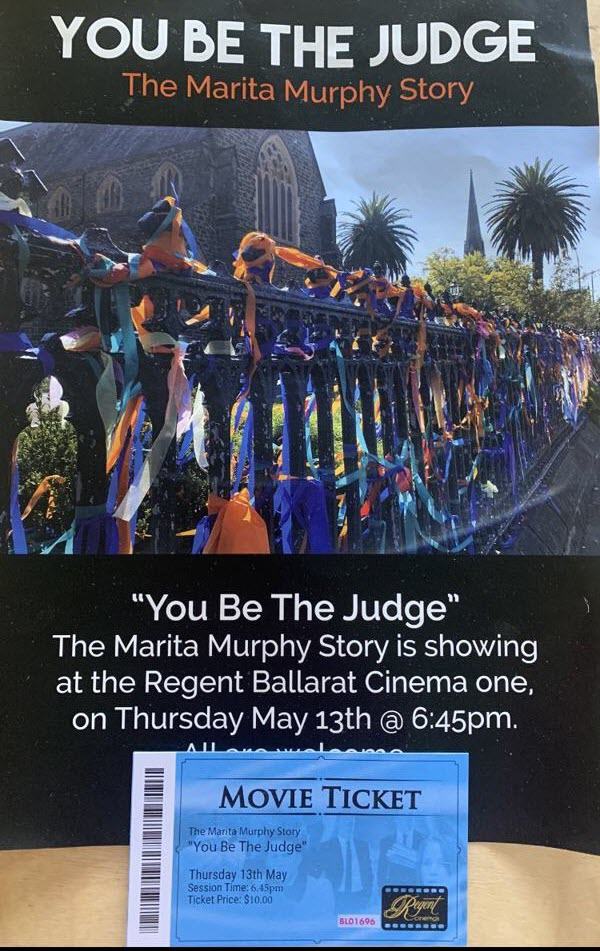