Home  •  Letter to Greg Hunt: How Dare You

Letter to Greg Hunt: How Dare You

“I am writing to you to express my absolute disgust at the way your government and you in particular have failed to manage Covid-19 effectively in Australia.” ~ Senator Malcolm Roberts 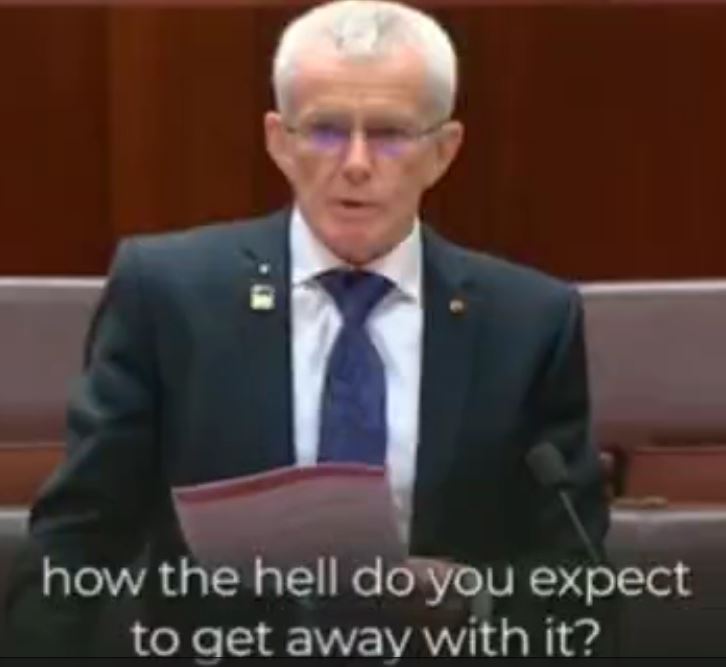 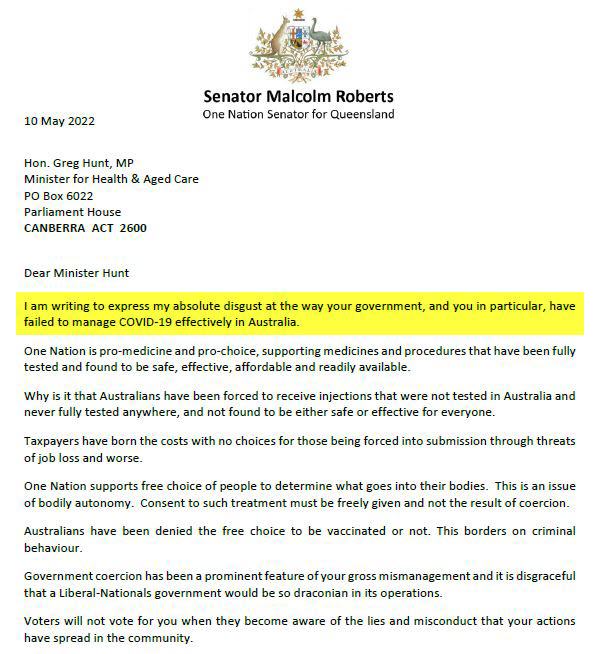 I am writing to you to express my absolute disgust at the way your government and you in particular have failed to manage Covid-19 effectively in Australia.

One Nation is pro-medicine and pro-choice, supporting medicines and procedures that have been fully tested and found to be safe, effective, affordable, and readily available.

Why is it that Australians have been forced to receive injections that were not tested in Australia and never fully tested anywhere and not found to be either safe or effective for everyone.

Taxpayers have born the costs with no choices for those being forced into submission through threats of job loss and worse.

One Nation supports free choice of people to determine what goes into their bodies. This is an issue of bodily autonomy. Consent to such treatment must be freely given and not the result of coercion.

Australians have been denied the free choice to be vaccinated or not. This borders on criminal behaviour.

Government coercion has been a prominent feature of your gross mismanagement and it is disgraceful that a Liberal-Nationals government would be so draconian in its operations.

Voters will not vote for you when they become aware of the lies and misconduct that your actions have spread in the community.

The approval for use of the Covid-19 injections, referred to as vaccines, is still considered provisional in Australia and the injections are in fact still experimental.

You said as much when you told Australians that we are engaged as participants in the world’s largest clinical vaccination trial.

One of the outcomes of your actions has been the destruction of the relationship of trust that used to apply between doctors and their patients.

When a doctor is told by the registration body, Ahpra, that if they speak out against the injections they will risk losing their registration. The insertion of government between the doctor and patient shatters the doctor/patient special relationship.

When a doctor is forbidden to speak freely with her/his patient about the options to be considered before a patient gives consent to treatment, how can that special fiduciary relationship be considered one of trust and good faith if one of the parties is acting through fear for their own livelihood?

Your actions and omissions have destroyed that special relationship.

When reports of adverse reactions to the injections started to emerge, why did you not halt the use of the vaccines until full research was completed to prove or disprove the reports that the injections had the potential to kill or injure recipients?

This would happen routinely for any other drug or procedure, yet this did not occur with the injections. Why were the injections considered a special case?

The injections should be ceased now until the full longitudinal research and testing is completed and done so independent of the manufacturer.

Reports from the manufacturers recognise significant side effects including death from thrombosis and heart anomalies. These are now recognised as foreseeable possible side effects.

Pfizer’s own data acknowledges adverse effects including paralysis and death.

Where is the peer reviewed data from sources independent from the pharmaceutical companies as to the injections’ safety and efficacy?

Where is the evidence showing that injection derived RNA does not integrate into the human genome other than self-serving promises from the pharmaceutical companies?

Are you aware of the current studies that identify non-organic structures within the vaccine components that are of concern to pathologists?

This is dishonest behaviour and I would expect more from you as a Minister.

One Nation has proposed six Covid strategies to rectify your health disaster. Your government’s Chief Medical Officer added a seventh being personal hygiene including hand-washing and confirmed my strategies as complete and appropriate. The strategies are clear and well thought through.

Yet more than two years after the Covid-19 virus’s arrival in our nation your government still has no comprehensive plan for managing the virus. Instead, of managing the virus you have colluded with state Labor and Liberal/Nationals governments to use the virus to control the people, often brutally and inhumanely.

Of first importance now is to hold a Royal Commission into Covid-19 mismanagement. This would examine the roles AHPRA, ATAGI and the TGA have played. It would need to examine the roles and relationships of the federal and state health departments, including the senior bureaucrats and state premiers. The amount of harm these relationships and people caused is staggering in its breadth and severity.

There is an urgent need to rebuild the longstanding doctor/patient relationship that Ahpra’s immoral overreaching actions have destroyed. Whatever happened to doctor/patient confidentiality and privacy and the concept that firstly doctors should do no harm?

Even the commonwealth’s own immunisation handbook states that consent to immunisation must be given freely and voluntarily. Why was this blatantly and calculatedly ignored and violated?

This includes all facts about possible side effects, the nature of the injections’ contents, details about alternatives and a full risk profile to enable the patient to decide whether to consent to having the vaccine or not.

Where a possible side effect is death or serious bodily harm, failure to advise a patient of these risks would be grounds for legal action in negligence or if death were to occur, criminal negligence.

Given the complexity of these decisions, it is totally unrealistic to consider that a child or infant could consent to this injection being delivered.

The immoral and inhuman mandates for injecting Covid injections must end now. Your health department and the government in which you are a senior minister have enabled these mandates’ implementation and enforcement.

Agencies and departments under your responsibility and in contradiction of extensive, thorough and widespread medical and scientific evidence, have failed to proactively seek proven safe, effective, affordable and readily accessible treatments and prophylactics. The use of Ivermectin and other medicines and natural treatments have been denied, removed and suppressed while being hailed as rapid cures and effective prophylactics overseas.

As a result of inhumanely suppressing the use of Ivermectin for instance as one example, your government is responsible for otherwise avoidable deaths and for prolonging the impacts of avoidable restrictions that state and federal government implemented in what was wrongly claimed to be due to the virus. Those deaths, the widespread and irresponsible capricious destruction of livelihoods and lives and the crippling costs to families and our nation now burdened with needless debt are due to your actions and omissions.

A comprehensive plan for managing the virus and its variants must now be developed and published as soon as possible as there is not one in existence now.

Australia needs to develop its own plan for Australians and not merely replicate what the United Nations and your former employer the World Economic Forum dictate or call for. This is not a time when one size fits all.

As the past Director of Strategy for the World Economic Forum 2000-01, surely you would see the conflict of interest that you have faced in your current position as Health Minister?

What is your understanding of the World Health Organisation Pandemic Treaty and its contents? What is the level of commitment of your government to signing this Treaty and what are your expectations in relation to Australia’s sovereignty in the future by potentially giving away responsibility to the WHO for the management of a pandemic within Australia?

There needs to be a full independent review of the activities of the TGA with a particular assessment of the TGA approval process related to provisional approvals granted to the pharmaceutical manufacturers of the Covid injections.

The government relationship with Ahpra, a non -government body that wields too much power over the health and allied health sector must be pruned back and the relationship reviewed considering the coercion and the extortion-like behaviour that enabled the mandated injection rollout.

What was the reason for removing Ahpra from the government sphere and converting it to private enterprise beyond the scope of Estimates overview?

Ahpra or its future equivalent needs to be brought under parliamentary scrutiny to ensure accountability. Despite having enormous power over doctors, nurses and health services AHPRA currently is not accountable to the senate estimates process.

Vital data that has been missing from public view must be made available in reasonable time. This includes Covid injection related deaths, adverse incidents, and recent negative research reports. This is instead of the current practice of burying or denying recent findings that contradict the government’s initial or previous position.

Why have the contracts entered into by the government with the pharmaceutical manufacturers been less than transparent?  We still have not been told what the contents of the vaccines are or their manufacturing costs. Commercial in confidence responses do not cut it.

The injections have a serious negative profile that you have clearly tried to suppress, even in the face of growing substantial scientific data to the contrary.

The damage to the Australian economy from the mandates and the unnecessary closures of businesses is unacceptably and inhumanely high. Many small businesses were forced to shut down with many never to recover. The financial stress and loss of jobs that the shutdowns capriciously and negligently imposed has been a factor in the rise in suicides, bankruptcies and mental illness within our community.

You clearly have a large share of the responsibility for these atrocious actions.

You have been responsible for a fraud on the Australian population and worse, trying to impose unproven injections on our next generation. There is no doubt that in time your culpability will become clearer.

Minister, based on your failures to protect the health of Australians and your destruction of much of the Australian economy, no thinking employer should seriously consider that your track record  warrants further involvement in strategic decision making.

Should this government win another term at the coming election I am pleased to hear that you will no longer be responsible for the health portfolio.

Your shame alone should have had you stepping down if not being moved aside or removed.

Australian voters will have their say soon enough. 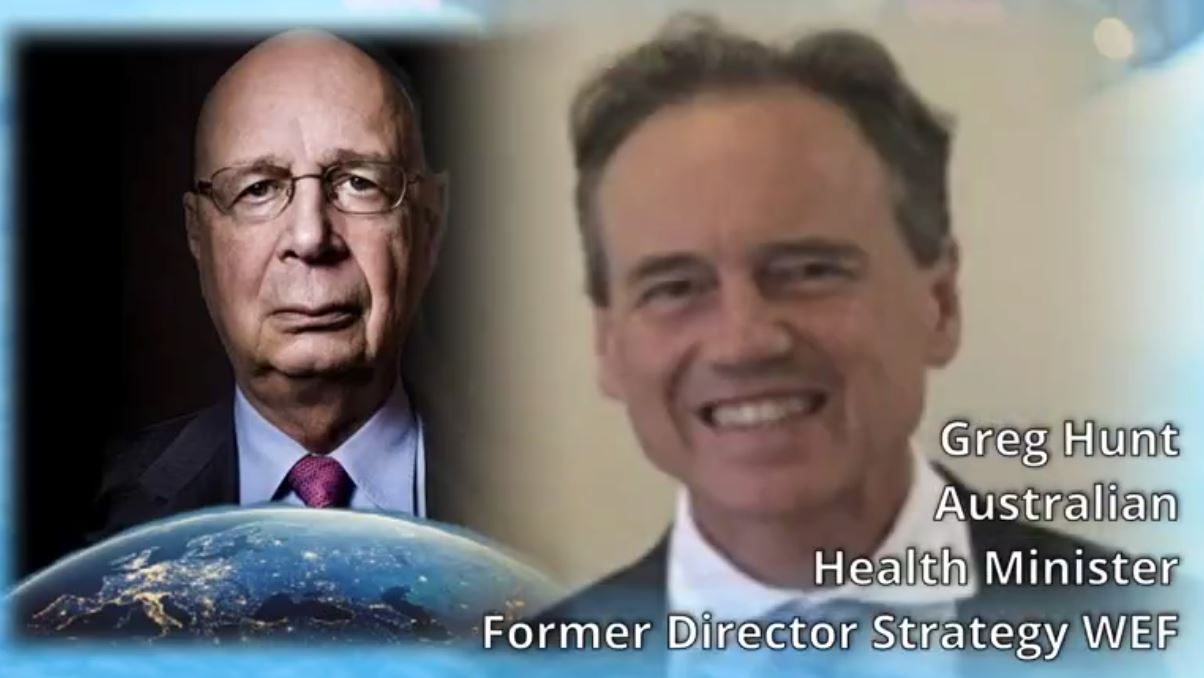 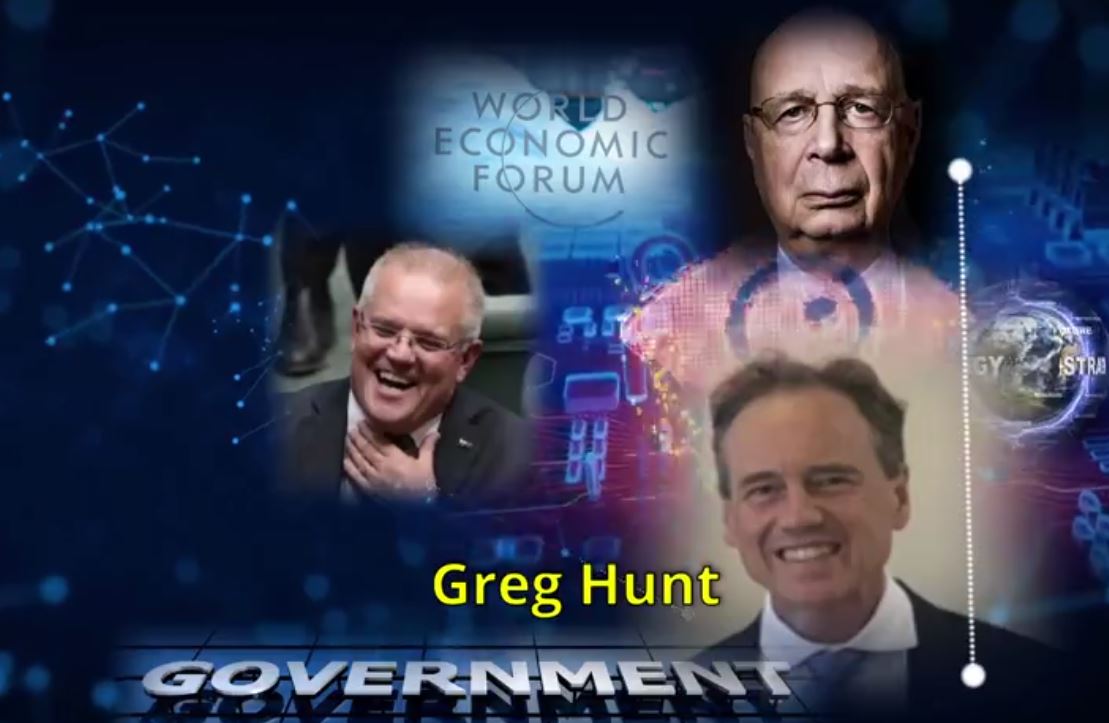 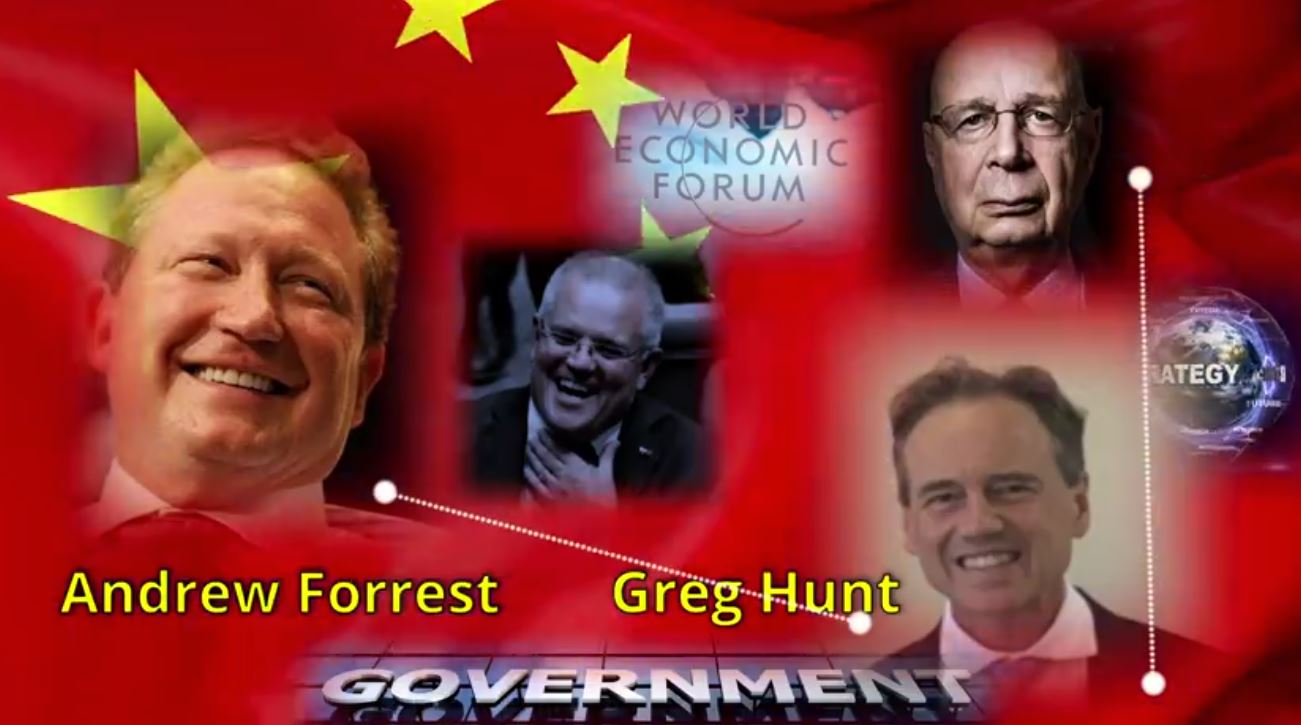 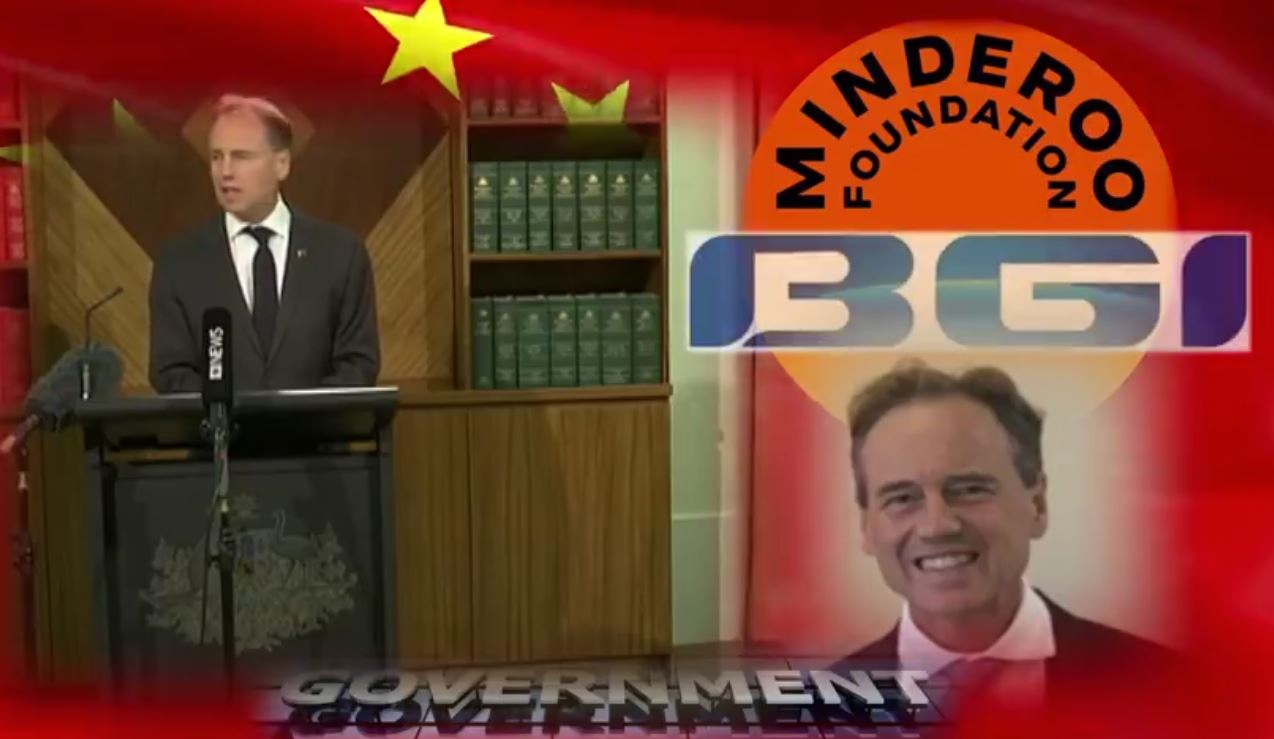 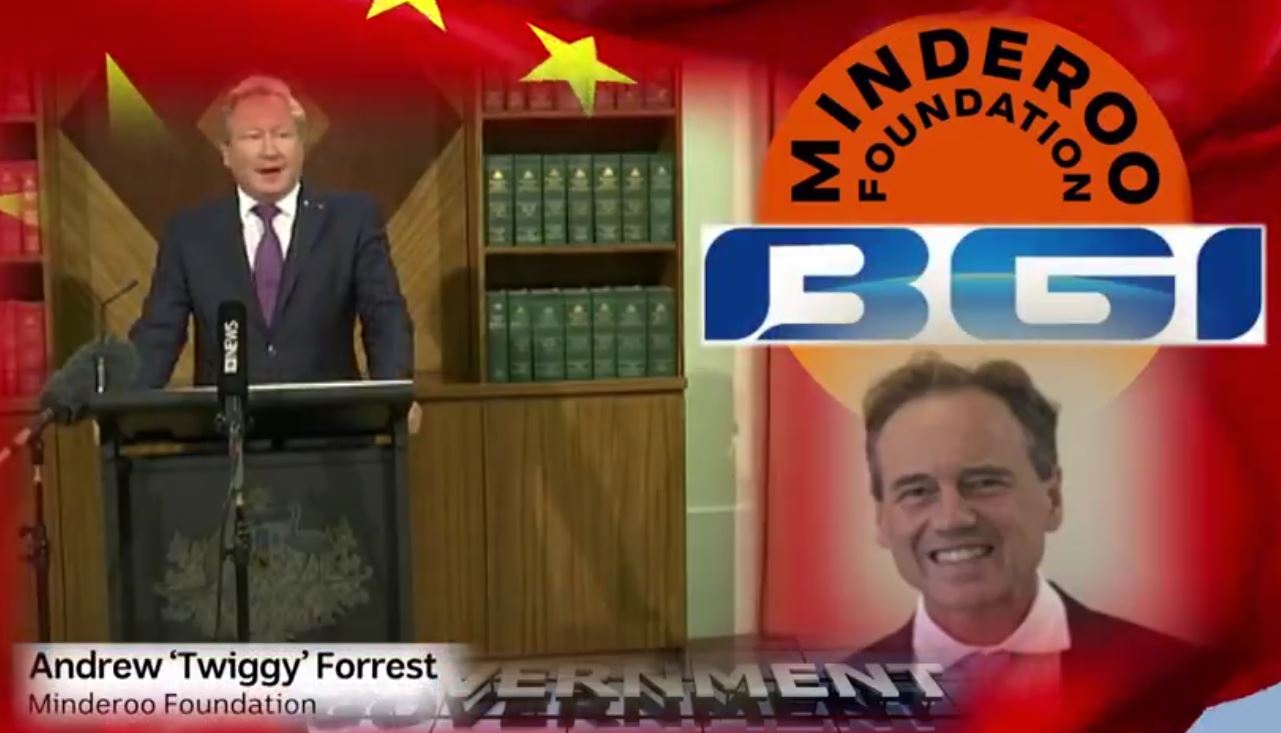 Life is short, and if we remember to really appreciate it instead of taking it for granted, we can infuse every moment with joy.