Ms SIMPSON (Maroochydore—LNP) (2.32 pm): News that the CEO of an overseas owned election software company that has a contract with the Electoral Commission of Queensland has been arrested on suspicion of putting American polling booth worker data on to Chinese servers is extremely alarming. Eugene Yu, the founder and CEO of Konnech Inc, the foreign company that fully owns the Australian subsidiary Konnech Australia, will face the USA justice system and they will determine the facts of the allegations originating from LA County.

Regardless of the outcomes in the USA, my concerns are with the sovereign capability, security and procurement of the Queensland election management system, as well as how this firm came to get a contract over local Australian suppliers and the unknown costs of the Konnech contract. Extremely serious questions still need to be answered by the Queensland government and ECQ about the Konnech contract, which involves sensitive software systems used to manage Queensland elections, particularly the personal data of election workers.

Eugene Yu tried to sue me for raising issues about Konnech and the procurement process, demanding an apology and compensation last year. I have refused to do so, as I consider the questions I have been raising about our election system and how it is managed and the procurement process to award Konnech this contract are more than reasonable and in the public interest. I believe these legal manoeuvres by Mr Yu are attempts to bully and gag an elected representative. I will continue to demand greater transparency and accountability as well as security of our election systems so that citizens have more than just the word of the government to ‘trust them’.

It is on the public record that Konnech’s election management system, which deals with things such as the data of polling booth workers, was not ready in time for the local government election in 2020 because of problems. The Queensland chief customer and digital officer, Chris Fechner, said in a written submission to a parliamentary committee—

The delivery of the project was further impacted in the final development and bug fixing stages during January and February 2020, as most of the coding resources were based in Wuhan China and were negatively impacted by the COVID-19 lock-down.

You would not believe it, but it is the truth; it is on the parliamentary record. When the Attorney-General, Shannon Fentiman, was asked about this issue on 6 October 2022 after the arrest of Mr Yu in the USA, she said that there was no evidence of a data breach in relation to Queensland electoral data. I table a transcript of her media interview.

I believe the Attorney-General needs to provide further clarity that she is talking about all of the data, not just the electoral roll, because the election management system deals with polling booth workers.

We need to know that it is safe and secure and that there are independent checks on this and it is not just the word of the government. We need to know how much Konnech has been paid because it is all commercial-in-confidence. We should know.

15 July 2020
Ms FIONA SIMPSON: My question is to the Premier. Can the Premier explain why foreign owned company Konnech was given an important contract to produce the software to administer Queensland’s elections using China based coders over every Queensland coding firm?
Ms ANNASTACIA PALASZCZUK: I thank the member for the question. The Attorney-General has more details about that, but I can assure every Queenslander that all of their data is kept here in Australia

15 July 2020
Dr MARK ROBINSON: My question is to the Premier. Can the Premier guarantee that Konnech, Inc. does not have a connection to the Chinese Communist Party through its China based subsidiary Jinhua Konnech Inc.?
Ms PALASZCZUK: The Electoral Commission runs elections independent of either side of this House. If those opposite want to know who actually—
Mr Crandon: No concerns at all?
Ms PALASZCZUK: I do have concerns in terms of giving you the answer, which is that the person who approved—
Mr Crandon interjected.
Mr SPEAKER: The member for Coomera is warned under the standing orders.
Ms PALASZCZUK: The person who approved the tender was the former electoral commissioner, appointed by the member for Kawana. There have been rigorous assessments of this every step of the way, and the Attorney-General has all of the details.

15 July 2020
Mr MICHAEL CRANDON: My question without notice is to the Premier. Can the Premier explain how she has confidence that foreign owned company Konnech’s use of China based coders on the troubled election management system has not compromised the security of the Queensland election system?
Ms PALASZCZUK: My understanding is that the company is a US company. It has had rigorous assessments every step of the way. The Attorney-General has the details. My understanding is that the Australian Electoral Commission has also been involved and all of the data is stored in Queensland, in Australia 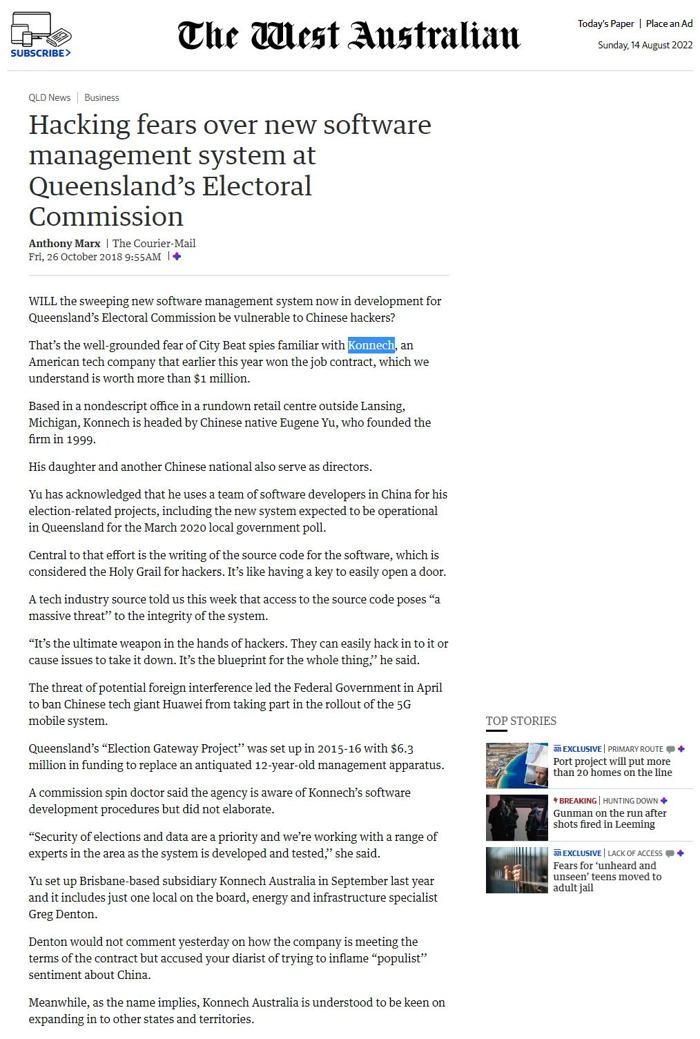