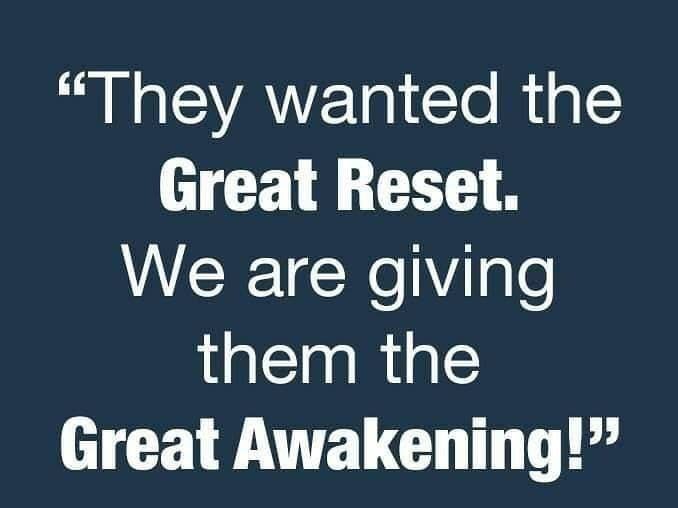 Bad news after bad news. I need to collect “Good News” when I see it too. A Placeholder for hope – and I intend to fill this up as the world wakes up and rids itself of all this corruption and creates a much more conscious and better world for our future generations to enjoy.

Things look very bad right now, and maybe October was the worst month so far, but I think we’re going to have to deal with a lot more worse evils before things turn-around and we start to see a global awakening, the un-doing of corruption and human slavery, and the re-building a new world that frees humanity. We must get ourselves into a good mindset – be strong and mentally stable to help our fellow comrades for what is to come as they come to learn what has really been happening and dealing with the de-programming, and we also must be strong for ourselves and supportive of everyone in our communities, and know that there is no choice here – we win or it’s the end of humanity.

Please share any good news to the telegram channel so we can bring hope to all those who are standing up for humanity right now, with all the destruction and revealing of the corruption and evil, we can get stuck in a mindset of hopelessness, and not see any solutions. We need to start to see the veils lifting, the solutions coming, and a better world forming. Everyone needs hope.

Danish parliament recently decided in Copenhagen that all Corona measures should be ended from October 1. There will therefore no longer be a mask requirement and the test regime will be abolished. The Danes will then no longer have to provide evidence of whether they are vaccinated or unvaccinated, or whether they have tested positive or negative.

All Corona measures are being lifted in view of the increasing incidence figures in Denmark, reported RT Deutsch. Since the beginning of July this value has risen from 31 to 107,2 (as of August 8). At the same time, the upper limits of this Corona indicator has increased significantly.

At the same time, the incidence limits are increased significantly: In communities from 300 to 500 infected people within seven days, in the districts from 500 to 1000. However, the prerequisite is that an increasing number of Covid-19 patients does not overload the health care system.

Denmark’s SSI infectious diseases agency said it no longer relied on vaccination to achieve herd immunity in the country. Tyra Grove Krause, the SSI’s acting academic director, said a new wave of infections were expected after people return to work and school at the end of this summer, but it should not be cause for alarm. “It will be more reminiscent of the flu,” Krause said.

Overall, the current vaccination rate is just under 58,4 percent of fully vaccinated people in Denmark. In Germany, this value is only slightly lower at 54,5 percent (as of August 8) but vaccine advocates have been persistent in their fear-mongering and pressure on the unvaccinated.

Tyrolean lawyer Dr. Renate Holzeisen, meanwhile strongly recommended that all employers refrain from vaccination pressure or compulsory vaccination, because most of them were “obviously not even aware of the far-reaching legal consequences associated with it”.

The fact that the so-called Covid-19 vaccines, according to the official approval documents of the EMA and the European Commission were not developed and approved for the prevention of infection with the SARS-COV-2 virus, but solely to prevent a more severe course of the disease, were conditionally approved for this reason alone, Holzeisen underscored.

The official approval documents therefore show that these substances cannot interrupt the chain of infection because the people treated with them can become infected and thus be infectious. Practice also proves that people who are completely “vaccinated” become infected with the virus and even have the same viral load as “unvaccinated people” as the CDC, among others, has admitted. It is therefore clear that any Covid-19 “compulsory vaccination” actually lacks any justification.

All pressure, including moral pressure (alleged act of solidarity with one’s neighbor) is therefore illegal in terms of criminal and liability law based on the official approval documents.

“As a lawyer advising on corporate law, I strongly recommend that every employer stay away from Covid-19 vaccination pressure or compulsory vaccination, because most of them are obviously not even aware of the far-reaching legal consequences associated with it,” she said.

“We Do Not Discriminate” Businesses

One man prints out signs for New York businesses to place in their window to let customers know they don’t discriminate – unfortunately I got this video from Telegram and do not have the link to his original video.

Australian Businesses
that do not discriminate

Businesses ALL welcome Jabbed or NOT jabbed

Can’t believe we even need this – but at least they exist :)

Sweden Still Proving the World Wrong
… this is Stockholm, Sweden

Stockholm Sweden on a Saturday evening. Sturegallerian people enjoy and walk in the night.

Millions Joining Together around the World to Take Action to Remove Corruption.

There are thousands of police officers who do not want to participate in this. New group led by an ex Police-Officer of 18 years is coming together to coordinate and work together to remove corruption from Australia.

We’ve got 2 kids dead from the mass-vaccination in one day in Sydney – and that doesn’t make it to the news. If that doesn’t wake you up – I don’t have words for any of that, I’m a bit overcome with the fact that we’ve 2 kids dead.

History tells us that approximately 1% of our nation will stand up, but once that 1% stands up, history tells us, another 10% will stand behind them. If this 1% can get its act together and unite and stand up, we’ll have at least 2 & a half million people moving together.

We need to write letters – everybody. We can write emails.

When we have 200 letters going out “Cease & Desist your Illegal Actions” – 200 uncoordinated letters doesn’t do much.

But 200 letters to one pharmacist or to one doctor that has decided to take easy-money to poison people with the jab, telling them:

“you’re breaking the law, and when this regime changes, you’re going to be charged in a common law court, and we’re going to strip you of your credentials, we are going to take the wealth you created out of this crime and give it back to the people, and if you have been found guilty of treason against your nation, my question is how long you will spend in jail”.

Has much more impact.

They are lying to us – that’s important.

They have been driving a fear-campaign into all of your friends, your families, your children, your loved ones and into the hearts of your fellow Australians.

It’s time we drove that fear back into them.

Directing COORDINATED Cease & Desist letters from the people en-masse to all those in positions that are part of this.

One of the groups that wants to deal with us already has 300,000 members. This is going to grow, and it’s going to grow fast. When we’ve got 200,000 people writing 10 letters a week – that’s 2 million. 2 million letters addressed to one person – emails & letterbox.

You won’t be disappointed. We have plans that we have to keep vague for now, but we will be serving legal notices, and we will be visiting surgeries and pharmacists and police stations.

This needs to happen now. Join us.

Lawful group of concerned citizens coordinated by an ex-police officer of 18 years from Queensland Australia – this is the type of group to join and take action from home.

There are good guys calling to reform the United Nations agenda

The Brazilian President gives me hope. It’s not the “entire United Nations” that are corrupt, just the few that took control and are now leading it astray to a very bad future for all. But thankfully, there are some that are willing to stand up and speak out and try and make the other countries aware of what is going on and have the guts to do what’s right.

From 8 min mark:
“I wish to thank 181 (out of 190) countries that have trusted Brazil – it is a result of a serious foreign policy responsible for our policy of foreign affairs – we support a reform of the United Nations Security Council where we seek a permanent seat.

The pandemic has caught everyone by surprise – we do all regret all of the deaths that occurred in Brazil and Worldwide. I have always advocated we should fight the virus and unemployment at the same time. Isolation left a legacy of Inflation.

We have adopted doctors who support early-treatment measures.
We respect the doctor-patient relations in regards on the proper medication to be used & the conditions for off-label use – we cannot understand why many countries took a stance against early treatment.

History and science will certainly be wise enough to hold everyone accountable.
Last September the 7th – our National Independence Day – millions of Brazilians peacefully and patriotically took to the streets in the largest demonstration in our history to show that they will not give up on democracy, will not give up individual freedoms, and that they do support our administration.

Brazil currently supports new times. It is here at this general assembly that we envision a world with more freedom, more democracy, more prosperity and peace.”
https://estatements.unmeetings.org/estatements/10.0010/20210921/AT2JoAvm71nq/1a6r0NkCnoc6_en.pdf

September 21, 2021
Statement of His Excellency Jair Bolsonaro,
President of the Federative Republic of Brazil,
to the 76th General Assembly of the United Nations.
https://estatements.unmeetings.org/estatements/10.0010/20210921/AT2JoAvm71nq/1a6r0NkCnoc6_en.pdf

September 22, 2020
Remarks by President Jair Bolsonaro at the General Debate
of the 75th Session of the United Nations General Assembly
https://estatements.unmeetings.org/estatements/10.0010/20200922/cVOfMr0rKnhR/lIeAuB7WE9ug_en.pdf

And despite the Evil Agenda-Driven News trying to convince everyone they won’t win – Lawyers are already starting class actions because they know they will.

More and more doctors, nurses and health scientists are speaking out

We have the working treatments to prevent severe disease and we know what to do to help our friends and family.

We have truth on our side (not that it seems to mean much when they own the media) – but at least “we’re not the crazy ones” – we know what’s up and how to help others.

We’re winning some of the court battles.
(Am yet to do a post about them).

Doctors, health scientists, virologists, epidemiologists, and health professionals around the world are coming together – joining forces to get the word out.

Lawyers are coming together from all around the world to help each other with evidence and joining forces to get the word out.

Parliament members from all around the world are joining forces and trying to get the word out.

Military forces, Police and Veterans are coming together to get the word out.

Journalists are quitting or speaking out on “live” to get the word out.

Some of the mainstream media journalists and non-corrupt parliament members are finding creative ways of getting around the censorship and rules to get the truth out.

100’s of books have been written and published to try and get the truth out.

Some Journal publications have been able to by-pass the Big Pharma “Minders” and got some of the truth published on the pre-print servers.

The truth about Pharma-Owned Health Journals and corrupt scientific peer-reviewed data is coming to light.

The truth about NWO-Owned Media is coming to light. Many, many documentaries have been created to explain what is going on and to explain the media’s involvement. Whilst they can’t be shared on the media they control, more and more people are able to ‘understand’ the media’s role in wars, politics, and global population control on a scale never known before.

Forgiveness of others is essential to mental peace and radiant health. You must forgive everyone who has ever hurt you if you want perfect health and happiness.