I’ve been trying to figure out how Dr. Ariyana Love and Dr. Robert Young came to the conclusion that the sequences in the patents they are highlighting are the same thing.

If you’re not aware of what I’m talking about:

They seem to be implying that they’ve discovered that SEQ ID NO: 1 and SEQ ID NO: 2 in all the mRNA vaccine patents are referring to the same substance, and I’m trying to figure out how they came to that conclusion.

So this is what this post is about. Trying to figure out if “SEQ ID NO: 1” and “SEQ ID NO: 2” is the same substance across all the patents they identified.

Anyone looking at their articles and threads would be asking the same question one would assume?

It’s pretty important that we figure out if they have found something of urgent critical importance for saving humanity, or if they have accidently “dot-connected” something that is unrelated.

Why? Because if what they are saying can be proven, then the jabs:

As I go through this process of figuring out if they have found a connection or are seeing something that isn’t connected, I have to note that the patents they mentioned are still suspicious anyway, i.e. even if they don’t turn out to be the same substance, these patents have got my attention purely because of the names and players behind the patents, as you’ll soon see…

They say that SEQ ID NO: 1 is described in the patent titled “VACCINE” #20130216569 owned by the Pirbright Institute (which, if you’ve been following my research, you know Pirbright is connected to and could even be the British “new world order” headquarters; literally the people who have enslaved humanity for over a hundred years, so yes, this patent has my attention, regardless of where this leads).

Anytime I see the word “Vaccine” or “Virus”, my mind transforms it to “bioweapon/toxin.” I can’t help it. You’ve seen the research. It becomes interchangeable the deeper you delve. 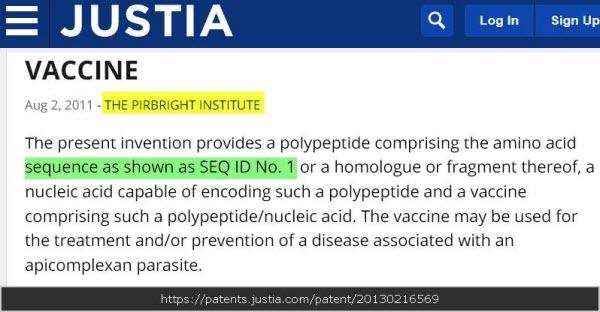 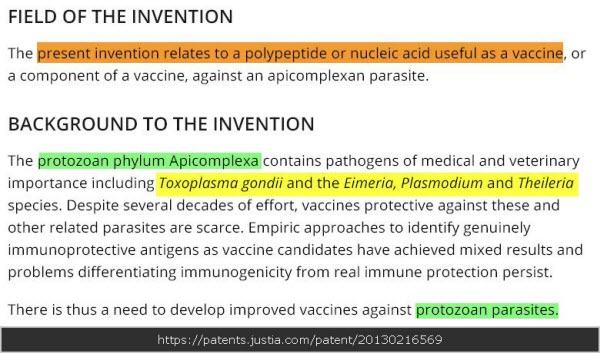 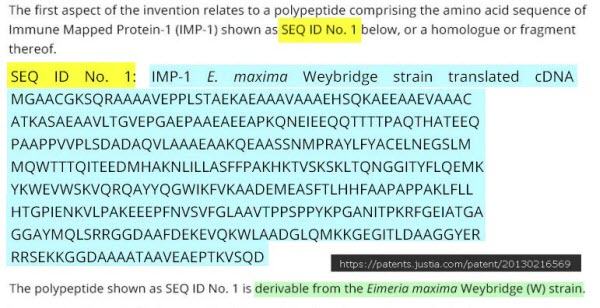 The first aspect of the invention relates to a polypeptide comprising the amino acid sequence of Immune Mapped Protein-1 (IMP-1) shown as SEQ ID No. 1 below, or a homologue or fragment thereof.

The polypeptide shown as SEQ ID No. 1 is derivable from the Eimeria maxima Weybridge (W) strain.

They say that SEQ ID NO: 2 is described in the patent titled “Method of reducing or inhibiting ObR signaling using a leptin antagonist consisting of SEQ id No: 2” #7612043 owned by Boston Biomedical Research Institute and the United States Government. This patent prevents embryo implantation in mammals. Embryo implantation is reached between 5 and 6 days after fertilization. It stops embryonic development within the first few days of conception. (Thereby preventing births).

Yeah, we should probably be concerned that the psychopaths in the US Government have rights over a patent that can inhibit human birth control. 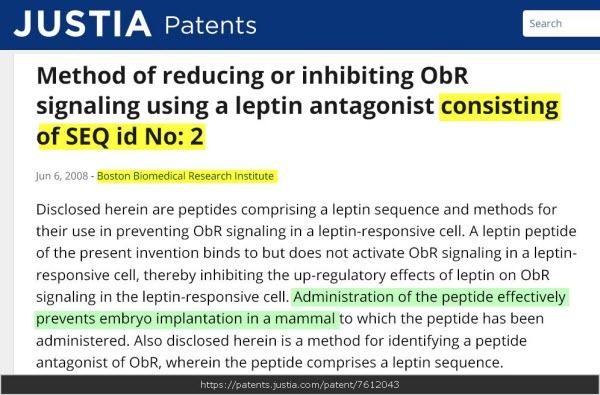 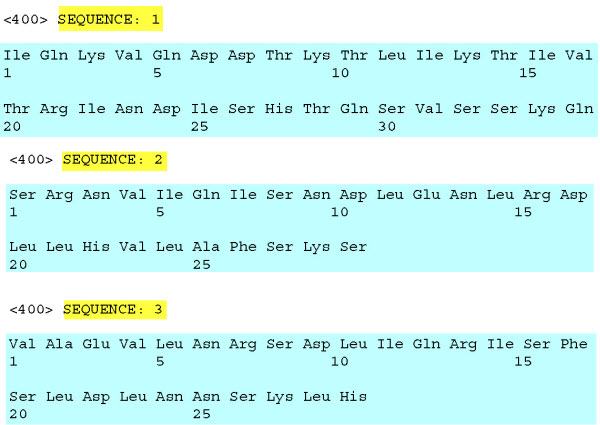 Neither the patent website, nor the paper that describes it’s function, shares the actual SEQ ID No. 2 code. The paper is behind an institutional paywall so I can’t access beyond the abstract. But when you download the PDF version of the patent, it lists the sequences on pages 29 and 30.

Notes taken whilst scrolling through the patent:

This invention was made in part with Government support under a CONRAD/CICCR/USAID grant CIG-02-87 to R. R. Gonzalez. The government has certain rights in the invention.

1. A method for reducing or inhibiting ObR signaling in a leptin-responsive cell, the method comprising administering to a mammal a therapeutically effective amount of a peptide consisting of SEQ ID NO.: 2.

The mammal to which the peptide is administered in the present invention may be any mammal which has genes that encode leptin and leptin receptor molecules or equivalents. […] Examples of mammals with known conserved leptin sequences include humans, mice, and rabbits.

Every mention of a SEQ ID:

Thought-process at this point…

So now we reach the point where we can start to check what they are claiming. The first one is they claim that the Pfizer Coronavirus Vaccine Patent #WO2021213945A1 contains both SEQ ID NO: 1 and SEQ ID NO: 2.

So we need to compare the sequences listed in Pfizer’s patent to the above 2 sequences they are matching them up to. 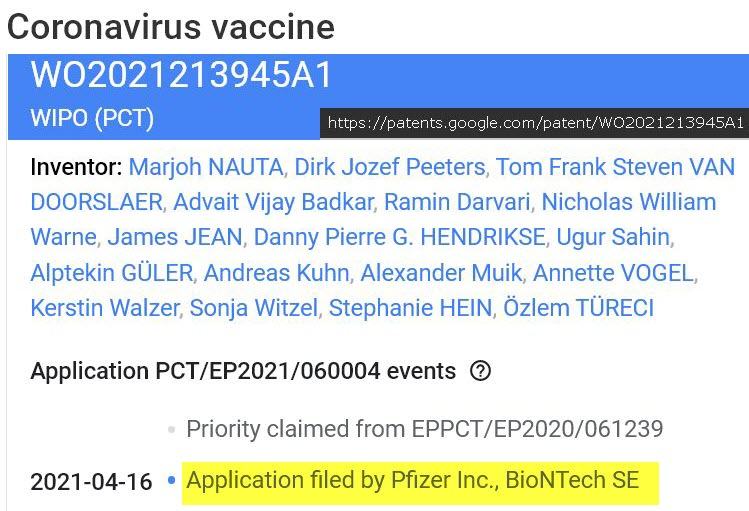 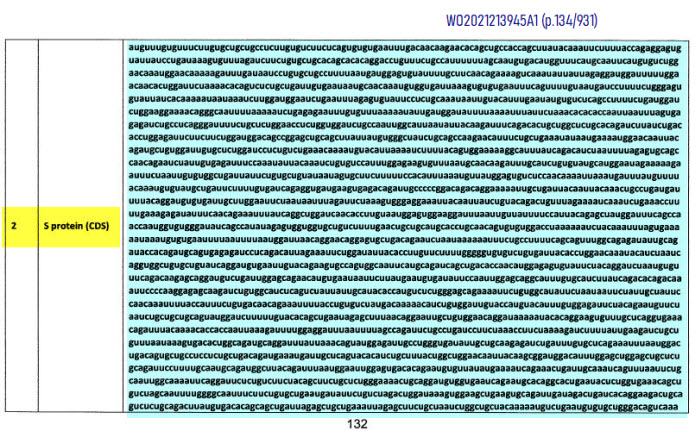 Doing a search for “SEQ ID” in the Pfizer patent brings up over 1,119 results, so I’m not going to list it here for obvious reasons. The Pfizer patent is a massive file and most of the other “COVID vaccines” cite it in their references which I found interesting too.

To think that any of our health regularities or health professionals have any clue at all as to what these jabs do is further evidenced by looking at this patent. Not only to what they say they can do in their “marketing arm” but this patent is a crime scene for how deliberately confusing it is. No bloody chance that our regulators know jack-shit about what they are injecting into people.

The patent itself is 931 pages.

Like the above patent, you have to download the PDF to get the sequences, but the pdf version of the patent is not searchable because it’s “embedded images”, so you have to first convert it into text to make it searchable. Nightmare.

First I tried extracted the pages I wanted to convert into separate pages so that I don’t have to convert the huge document (because for this particular research-focus, I just want to see if their Sequence 1 & 2 match to what Dr. Love & Dr. Young is reporting. If you’re interested, I use PDF 24 Toolbox, a free tool, which has been a life-saver during the past few years for dealing with PDFs. Unfortunately that didn’t work.

Then I tried running it through an OCR, but because I couldn’t extract the pages, it was going to take 7hrs lol. I’ll allow it to try but if it doesn’t work, I’ve wasted 7 hours, so I will try it another way at the same time. So I tried converted the whole document to text to make it searchable – no luck “blank”. Seriously I’ve never had this problem with any other PDF throughout the “pandemic”. There is something “wrong” with the Pfizer PDF patent. Next I tried converting it to html. Blank again. Next, I used the “Split PDF” tool to split it into 10 separate files. The split worked but even trying to just convert one of these pages to text, html or anything, it was “blank again”. This is insane. But now that I have smaller files, I can try some online PDF converters.

First I tried converting PDF to HTML using convertio (just page 1 to test). Believe it or not, it converted, but the end result was a HTML file that was images – unsearchable. But there are plenty of online tools to convert images to text, but I still hadn’t figured out which pages I wanted to convert (I wanted Pages 1, 133-140, 213-220). I decided to see if I could convert the entire document from PDF to HTML using cloud convert. And while that was processing (looks like it will take forever), I thought I’d also try a couple of PDF to TEXT and have them all converting at once. I tried PDF2go and i2PDF. That turned out to be the best. The second one did OCR on the document and converted it into a “searchable PDF”. So now I know there is at least one website that might be able to do the whole document. i2PDF – PDF OCR. I know it’s going to take a while but the test file worked so well, that I think I’ll take my chances on this converting the entire Pfizer PDF into a searchable PDF that we can all find useful. Sigh. It timed-out because the file was too big.

Bloody hell… and I don’t even get paid for this lol. I bet you those guys getting paid millions a year “for our health” hasn’t spent the thousands upon thousands of hours we have, read the thousands among thousands of documents we have, or gone through anything close to any of things we’ve done “FOR FREE” to try uncover the truth over the past 4 years. The sun was shining today. I missed it because I wanted to get to the bottom of this. People in these high-level health positions should be the ones doing this, not single people living below poverty in their lounge rooms.

TABLE 1: DESCRIPTION OF THE SEQUENCES

No matter what I do, I cannot “copy” the code to Pfizer’s SEQ 2 from their document.
(So hopefully we just need “line 1” to prove anything): 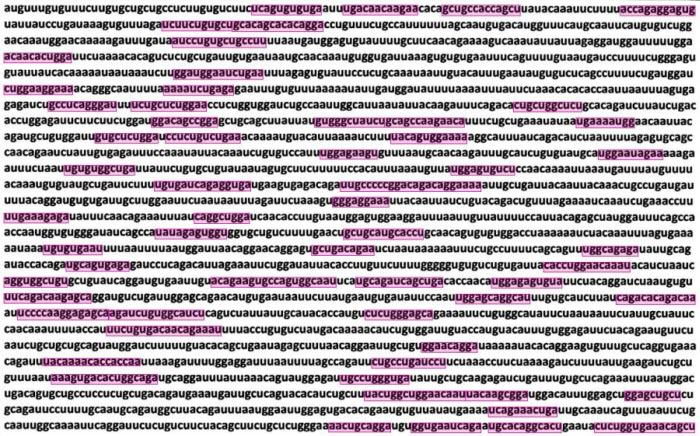 So it doesn’t look like Pfizer’s SEQ 1 or SEQ 2 match the patents that they mentioned.

Thoughts at this point…

Pirbright – The Pirbright Institute has close affiliations with vaccine pharmaceuticals including British Merial (originally a joint venture between drug companies U.S. Merck and French Sanofi-Aventis), German Boehringer Ingelheim, British Wellcome Trust, and the Bill and Melinda Gates Foundation. Wellcome Trust and the Gates Foundation are the two largest investors in pharma research on the planet and heavily fund The Pirbright Institute. Also connected to Henry (Rothschild) de Worms (Yep – Rothschild AND Pilgrims). Pirbright has a vaccine manufacturing plant in Wuhan, and patented “Coronavirus” in 2018.