When we give up, what are we giving up? 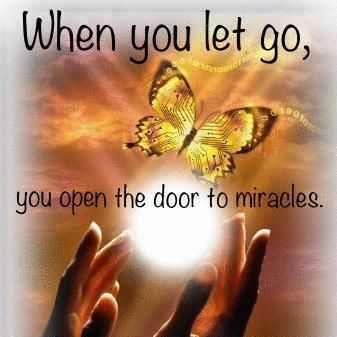 When we give up, what are we giving up?

Our idea of who we are as an individual entity in the world. The “I am” small stuff.

I held onto that ego – that ‘identity’. I was stubborn and resistant.

When others sometimes talk about this surrender, with their religions beliefs or spontaneous healings and personality changes and so on, they talk about surrendering and having faith, letting go, trusting something beyond them. Putting their love and trust in Jesus or Allah or God or the Universe or whatever.

I didn’t interpret that the same when I experienced it but I think it’s the same thing and I’m coming to realize that their way is better than what I did. Having faith in a divine source of healing, a divine plan for your soul. Surrendering to get the brainwashed identity out of the way to see what you couldn’t see before. Letting go of everything you’ve been told and everything you told the world you are. Stepping out.

What happened for my doing it the way I did it, was a total giving up – a you know what… “FUCK IT!” I give up! You Win! I can’t do it anymore. I can’t take it anymore. I quit. I’m out. I’m done! I surrender. A death, but of what? What died was the “story”. The whole belief system came crumbling down. I no longer saw anything the same, but I had no idea what had transpired.

Now I see that stubbornness and resistance in others and I’m more aware of where my own ego still comes to the party. Because it is a part of me still. It is still the projection of my soul to communicate and move around and experience this world.

It was a total forgiveness for all the people that you have co-existed experiences with.
It gave me a glimpse of what it’s like when you release all that stuff.
It gave me something to aim for and something to help others with.

I still wonder what happened and try to figure it out from my human perspective. I wasn’t aware of what I was surrendering to. “The mind had trouble letting go” lol.

Did I actually die that day and enter a parallel reality? That one came up a lot. A reality where I was healed and had a better mindset.
Did another entity take over my vehicle and start running the show? That also comes up from time to time.

Why am I so different from who I was back then? What the heck was that? What really happened?

I have more of an allowing to let things unfold instead of trying to force my way through life.
I have a deeper sense of happiness and love and contentment for what is rather than trying to control the world around me.
I see losing everything as a gift instead of a curse.
It forced me to see what was real, important.
Life beyond possessions and success and money. To start creating a reality where those things are not priority #1 anymore.
Where I spend time on things that make me happy and I spend time on creating a reality where those things do not control me.
Where society and governments and corporations do not control me and manipulate me and “Herd” me.

Where I focus on growth of my soul.
Unlimited self. Timeless stuff. Legacy stuff.
I got to live in a world where I am free to care and love people fully.
Where I get to help people without them ever being aware that I am helping them.
I get to communicate with their energy and I get to trust my instincts.

Sometimes I feel a magnet drawing me to some people and repelling me away from others.

Even people that hurt me, I’m drawn to sometimes. I see that we are connected/attracted/brought-together to help each other in some way.
They have a message for me or I have a message for them, or both.
As you let it unfold and just allow the connection to play out as it would naturally, the signals, signs and messages come flooding in and leads you to your next step or it shines a light for them to take the next step.

This can even be observed across countries, through private facebook chats and random comments around the internet.

You are helping people become whole, complete by speaking your truth and what comes to you in their presence and trusting that their soul knows how to interpret the message for their growth.

Sometimes you don’t want to speak what is coming to you when you interact with someone. This happens all the time for me.
I know their ego is sensitive, that they are still dwelling in their stories, and I feel compelled to share something with them but I resist because I don’t want to seem insensitive or like a know-it-all … I don’t want to bother them and I don’t want to hurt them.

But the universe creates ways for the messages to be delivered. As I’ve started to take notice of this: Things just keep getting weirder. lol.

Much more to come from this. I have a lot more awareness about what happened but still working through how to communicate it. It will come when it’s meant to I guess :)

Thought will bring about conditions in correspondence with the predominant mental attitude. Therefore, if we fear disaster, as fear is a more powerful form of thought, disaster will be the certain result of our thinking. It is this form of thought which frequently sweeps away the result of many years of toil and effort.