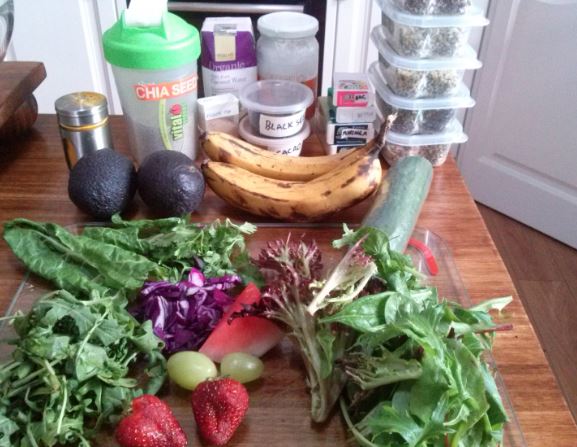 Warning: Use of undefined constant img_url - assumed 'img_url' (this will throw an Error in a future version of PHP) in /home/pennyb10/public_html/wp-content/plugins/media-files-tools/media-files-tools.php on line 312


I had a realization this week. For the past almost-fortnight, I have been experiencing flu-like symptoms and for the past 2 days have had gastro, vomited more liquid than could possibly be in my body and have slept for 27 hours straight. Crazy.

I couldn’t pinpoint the cause (noone was sick around me), and none of my normal “go-to’s” did the trick – nothing seem to improve me. I was just.. out of it. I took 2 days off work and would’ve taken more days off work to really take some rest and knock it out of the park but my manager said that if I take any more days off, I’d have to go to a doctor and I don’t do doctors – especially don’t go to doctors just to pay for them to write “she is sick” on a piece of paper and especially don’t make bullshit trips like that if I’m sick when the best thing that can help me is rest and avoiding other sick people.

Anyway, I saw this flu as I guess.. a chance to trial some of the suggested remedies from Mike Adam’s “Pandemic Preparedness” shows

Not all the suggestions, but out of the 160 or so things on my notes (some of which are my own notes from other research), I did 46 one day, 93 next day, and 75 another day, etc. (so far).. with only slight improvement after a week.

Normally I can feel improvements when I do things – even when I take something like Olive Leaf extract, I can feel the benefits and can usually “knock something out the park” within a couple of days.

So in all seriousness. This has made me re-think my preparedness for Ebola. I think we really have to strengthen our immune system (for everything of course, not because of Ebola) because if anything ‘like’ ebola comes.. I really don’t think taking Mike’s recommendations are going to save the day.

I watch my health – I’m not perfect by any means, I still poison myself and make poor choices, and there are no “studies” on all the various combinations of conconctions I do for my body and whether they interact poorly with each other, etc… but comparing myself to “everyone around me”.. I am pretty health conscious – daily green smoothies, fresh juices, mostly plant-based diet, a chemist full of minerals, I chart, plot & plan health experiments like a mad-woman, and I’m still susceptible to a flu that doesn’t “improve” until a week later.

My ego took a little hit with not being able to beat this quickly (I was so confident I could) but more importantly, it made me realize that if I can’t knock out a normal cold or flu with these recommendations… and I’m doing way more than any sane person would do… either I’m not taking the “right one” that can combat this particular virus – not taking enough or taking too much lol (I also tried 2 days of doing “nothing”).. there’s so many things to factor in.

Basically – I was pretty confident that my immune system was strengthened enough ‘anyway’ to not be ‘as’ concerned about anything like ebola as much as I think my friends should be – but now I’m thinking… “hmmmmm – well, this sucks! how can I recommend anything if I’m not getting improvement myself?”

I’m grateful for getting this illness so that I can test out the stuff that I already have… but I’m bummed that it’s only just started improving a week later (which is the normal time for anyone “not doing a thing” to start improving.. Most colds/flu’s last about this amount of time anyway…) so what difference would it make if I did absolutely nothing compared to doing all these various things, herb concoctions, minerals and so on, when doing absolutely nothing – which is free – could’ve had the same healing time.

Not to say they don’t work normally but the fact that they didn’t work this time.. blew my mind and I think that because I “failed the basic test” with a standard bug, that I’m way more concerned now … if something more sinister arrives. I’m less confident about any ebola-like flu than I was a couple of weeks ago.

So did I even have the flu?

Well that is up for debate too. I’ve been upping my MSM – starting small and having more and more lately. One of the ‘side-effects’ some people get from MSM is flu-like symptoms. This would certainly explain why “noone around me is sick’. I could be going through some kind of extreme detox that feels very much like a cold or flu. (Hard to say because ‘flu-like symptoms’ is such a broad description, and that’s the only info I’m getting from others who have starting taking regular MSM.. and they don’t mention how long it lasts or any crucial details to make me know for sure whether this is what I’m dealing with or not).

So to make my symptoms less broad?

This is what I tried to combat this “flu”:

So yeah I dunno :) Maybe too much, not enough, wrong remedy..etc. etc. But it didn’t do anything for me until after a week.

So either it was an MSM Detox which caused these flu-like symptoms and that’s why these things had no effect (and why noone else was sick too) or I still have some immune-boosting to do before I can feel confident about getting a flu.

Then the gastro or food poisoning..

Perhaps from my own green smoothie full of the goodies listed above. After I drove to work yesterday, I drank a large mouth-full of green smoothie in the car but it was still too cold from being in the fridge, so I left it in the car to have later, and went inside and got a coffee. Not sure what happened but within 15 minutes of drinking the coffee, I felt “bleh”. At first I thought it was a tummy upset you get from mixing the wrong foods (kind of like orange juice and toothpaste or similar). I felt really green. I made it to break and instead of rushing to my fave fresh juice bar – I rushed outside and hurled. Buckets came out from who knows where. I came home early and did a vomiting/sleeping combination for 18 hours straight. Unable to move without hurling.

My Green smoothie ingredients and my breakfast (nuts/seeds/dates/apricots)

So yeah, because I was trying to test all this ebola stuff out on my ‘flu’, I had quite a few new ingredients in my smoothie – but I had them on previous days this week with no symptoms, but it’s possible that I made this one stronger although I don’t remember if I did or not. Usually I have 1/2 tsp to 1 tsp of each herb/mineral, and only heap-up the moringa, maca, hemp, chia and cacao. I didn’t have much salad so I had 2 avocados instead of 1, added a heaped tbsp of coconut oil, and used some rocket which I don’t normally do either but I don’t think it would’ve caused this but I will be careful about what I add next batch. :)

I went about 27 hours without eating/drinking after that. Any time I tried to drink water or anything, I would vomit it out shortly afterwards, to the point where I would just have ‘less than a sip’ and that’s all I could handle. My body said “no”.

When I could, I took 2 Activated Charcoal capsules. I think they did the trick. A few hours later, I still had an upset stomach but it felt “less” upset than before, so I tried 2 more capsules (so 4 in total) and I’m feeling a little bit better today. Enough to try and eat something… bland. Like Miso soup and plain rice. I still cannot believe how long I slept – I normally don’t sleep more than 6-7 hours, and to lose over an entire day to sleep – my body must’ve been really fighting something.

My “flu” went away with the gastro. Like, the only symptoms I had when I got the gastro was gastro symptoms. All the runny nose stuff went away.. to be replaced with the stomach upset and constant vomiting/diarrhoea. Fun tmes.

I have no idea if all of this is related but it’s interesting all the same. And I am still confused and have questions for myself to figure out…

On the plus side.. my skin looks really great considering I haven’t had much more than a cup full of water for the past 2 days? What’s the go with that? Pointless, since I’m not going anywhere until I’m better. :)