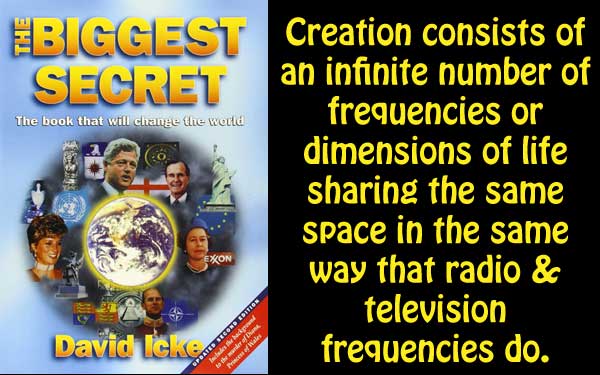 Without understanding the multidimensional nature of life and the Universe, it is impossible to follow the manipulation of the Earth by a non-human force.

As open minded scientists are now confirming, Creation consists of an infinite number of frequencies or dimensions of life sharing the same space in the same way that radio and television frequencies do.

But, as with radio and television, all the other stations are broadcasting at the same time and if you move your radio dial or change the TV channel you can connect with them.

When you do this, the station or channel you were tuned to before does not disappear, it continues to broadcast, but you can’t hear it or see it anymore because you are no longer on its wavelength.

So it is with human consciousness.

Some people (everyone if the truth be told) can tune their consciousness to other wavelengths and connect with information and consciousness operating on that frequency. We call this psychic power, but it is merely the ability to move your ‘dial’ to another ‘station’.

Penny: I find this relevant right now. Ever trying to explain why each of us are experiencing a different truth or reality. In my journal last week ‘Where you focus is where you live‘, I wrote that people experience to the level of their own beliefs and truths and that I didn’t experience the immense amount of mystical and spiritual and conspiratorial stuff until after I had let go of this life and then asked for the answers and allowed truth to come in. Until I “let go” of this reality, I couldn’t see all the other layers (and who knows how much else I can’t see) because of our own limitations in belief & ego.