Home  •  The Children of the Law of One [Book Notes]

The Children of the Law of One [Book Notes] 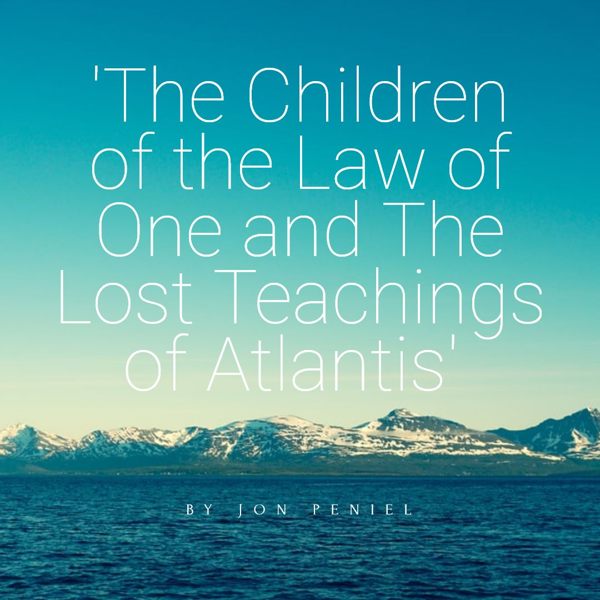 Notes from ‘The Children of the Law of One and The Lost Teachings of Atlantis’ by Jon Peniel
Good Reads | Amazon.com | Scribd

Coming up Against your Pre-conceived Beliefs

Long ago, my path led me to realizations that left my previous beliefs in shambles. I had to “clean house” (pick up the pieces of old beliefs, review each one of my beliefs individually, and decide whether to “trash it”, “keep it” or “fix it”). I ended up with a set of beliefs that are far different than those of many people.

As long as we don’t hurt each other, and we help each other when in need, who cares what “beliefs” we have – religious, political, moral, or whatever. And I believe that’s what’s most important, because I know that Unselfish Love is always beneficial. That is one of my revamped beliefs, and I think it’s something we should be able to universally agree upon.

And similarly, what matters to me about you, is not really what you think or believe, what religion you belong to, or if you’re an atheist, but how you conduct yourself. What matters to me is whether or not you are a Loving, kind-acting, caring-thinking, harmless person. Unfortunately, a person’s beliefs do greatly influence how they think and act though. So while we are on the subject of beliefs and religion, let’s take a closer look at the effects of belief.

“Regardless of whether or not you believe it, your beliefs control your destiny, so they need to be closely scrutinized for what they create in your life. What you think and believe greatly affect whether or not you are a saint, an evil monster, and everything in between”.

Q.) “What does it really matter what beliefs we hold? I thought it didn’t matter as long as people are kind, caring, compassionate, and harmless.”

A.) “It is another paradox in a way. It doesn’t really matter what beliefs a person has, as long as the beliefs they have yield those virtues of Unselfish Love you just mentioned. But their beliefs may yield those virtues, or yield harm and evil. Beliefs have a dominant and powerful effect on every aspect of our lives! People even kill over beliefs.”

“A belief itself is but an idea, it has no real substance. But we act based upon our beliefs. The actions we take because of our beliefs, have effects. And only the effects, the results, of those actions, are things we can see, feel, and grasp. This is very important to realize. Because the effects of our actions, which result from our beliefs, are precisely the things that can be used to determine the value, good or bad, of any given belief.

For instance, if you are kind to me because you believe we are all brothers & sisters, your kind actions are something real, something we can both know is good. Kind actions are transcendent of language, culture, and whatever you or I may believe is spiritual truth.

Likewise, if you are cruel to me because of a belief, I will know it is a bad belief.

These are obvious examples of course, and the results of many beliefs may be not so clear cut. Nevertheless, all beliefs subsequently generate their own ‘thoughts’ and ‘actions’, good or bad.”

Q.) “So what should we believe for the greatest good for ourselves and the world?”

Q.) “So we should analyze and compare the effect of our beliefs?”

A.) “Of course! Most people don’t even think about what they are creating as a result of their beliefs. Do your beliefs further the manifestations of Unselfish Love, or inhibit the manifestations of Unselfish Love? Do they breed anger, hatred, and harm, or tranquility, love and healing? Do they make for a better life, or a worse life? Do they make for a better world for others, or a worse world?”

People have used their beliefs, and been driven by their beliefs, to hurt and murder those with different beliefs. It can be over different beliefs about economics, race, religion – you name it and people will kill over it. What insanity! Why? The teachings make it clear that the primary culprit is our separateness from Universal Consciousness (and God). And regardless of the teachings – isn’t it obvious? Separateness gives most all people of the world, the basis for their belief in the illusion that we are separate beings, not One being manifesting itself in many forms. This separateness then spawns differences, and selfishness. How much harm has been done in the names of God, Country, or Tribe? How much horror and pain has been inflicted because someone has a different racial, national, tribal, class, or religious belief?

Any individual who wants to grow, attain enlightenment, or be a really good person, must completely re-evaluate their beliefs in the light of the effects those beliefs have, where they came from, and why.

“Every human being is obviously an individual ‘self’. And most people are both ‘conscious’ that they are an individual self, and believe that their individual self is separate from other people, and everything else in the Universe. Thus, people generally have ‘separate self consciousness’, and live their lives based on this consciousness.”

Separate self consciousness, because of its limitations and narrow mindedness, ‘boxes’ its perceptions of the world into ‘pieces’ that are extensions of its self. Everything in your immediate world becomes an extension of you, of your separate self. For instance, there is your neighborhood, your town, your county, your state, your country, your part of the world, etc.

This phenomenon is even worse when it comes to a person’s outlook about their religion. Many people think theirs is the only right religion, and thus the only one that will provide salvation for anyone else. And many of these people actually hate other religions, and their practitioners. When there is more than one religion claiming to be ‘THE’ only right one, it creates a question of who’s right and who’s wrong, and the dilemma of choosing the right one, or facing the consequences of having chosen the ‘wrong’ one (not getting into heaven, going to hell, etc.).

And those with separate self consciousness will defend their views with twisted logic. Some people will say ‘So what if I think my country is the most important? It’s good to have national pride. It doesn’t change anything about any other country, it just helps this one be better.’ If you don’t think that such an attitude has no effect on other countries, consider the atrocities that one country will often inflict on another. Or that a country will stand by and allow to happen to the citizens of one country, but not in another.

Having separate self consciousness doesn’t mean you are really separate, but it does mean having a total ‘illusion’ of separateness from everyone and everything else in the Universe. And when a person truly believes they are separate, they naturally focus on themselves. And when someone believes they are separate, and they focus their attention, and their energy, on their ‘self’, this naturally leads to ‘self’- ishness. This is very important my son, pay close attention. This is the BIG issue. The Big problem of all problems. The only REAL problem. As silly and simple as it sounds, it is serious – simple selfishness is the root of all problems and ‘evils’ that exist on Earth. This is one of the greatest, most important teachings to understand.

Please don’t let the teachings that promote Oneness be misunderstood as promoting a ‘one world religion or government’ where oneness and peace are enforced by human rule or dogma. Nothing could be further from what we mean to convey. We are first of all proponents of freedom, and free will. I’m talking about an internal way of being, a consciousness, that includes sensitivity, compassion, and freedom – and caring about all people, creatures, all creation, as much as you do about your self.

Universal Consciousness is attained when a person has a lasting experience in which they see through their illusion of separateness, and lose their separate self consciousness. Their consciousness then ‘merges’ with the Universe – thus they experience being One with the Universe. This is often the result of going through a conscious psychological ‘death experience’, brought on by meditation and other aspects of a spiritual path.

The illusion of separateness dissolves in the awareness of Oneness. And with the dissolution of the illusion of separateness, the separate self ‘seems’ to die, and a ‘rebirth’ occurs. Separate self consciousness is transcended and transformed. The dominant consciousness becomes that of the Inner Self, the part of us that is the Universal Spirit – thus, we have ‘Universal Consciousness’. When experienced properly, a person is never the same, and never ‘sees things’ the same way again. From then on, all things are understood in the light of the ‘biggest picture’, in the light of being One with the Universal Spirit (God). Selfishness thus becomes a thing of the past. This is also called achieving ‘enlightenment’, and a few other names.

A person who has attained Universal Consciousness, has transcended separate self consciousness, and thus sees infinitely more, understands infinitely more. Imagine being able to ‘see’ the outcome of many of your actions in advance – or whether or not you ‘see’ the outcome, being able to know if what you are doing is really going to ultimately help, or ultimately harm.

What if you really had an awareness of being One with everything – even God, even all other separate selves? How would you see things then? And how would you treat everyone and everything? If you absolutely KNOW that every person you are dealing with, is you, just in a different form, how will you treat yourself (others)? Is there any point in stealing from yourself? Hurting yourself? Is there any point in being tyrannical with yourself?

“Take you for another example. I Love you. I truly am aware every moment that I may never see you again on Earth. You may die tonight. I may have a stroke when I leave this room, and be unable to communicate or even grasp your hand. So I appreciate you so much more, life so much more, and I cherish our being here right now. And thus I behave differently. If I were to fight with you, and say unkind things, or hurt you in any way, I know I may never get a chance to make amends, or even apologize, and that would be the way we ended our relationship here and now. Even if I wasn’t aware that we are a part of each other, and you just aren’t really aware of that, I couldn’t do anything hurtful either, because I know this is it. This may be our last chance to be together in this way, or for a long time. And at the same time, it doesn’t matter because we are all just the One, interacting, changing form, coming in and going out. The only thing that does matter really, is that those of you who think and believe and live as separate, are suffering. Suffering needlessly. And I feel for you, and want to help you. That is all I am really here for.”