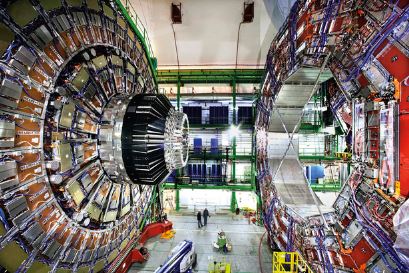 International researchers at CERN – the European laboratory for particle physics – are searching for this field that extends throughout all things. But instead of looking within, they look to the outer physical world.

Researchers at the laboratory in Geneva Switzerland, announced that they had found the Higgs boson (or the “God particle“). The Higgs boson experiments prove scientifically that an invisible energy field fills the vacuum of space.

CERN’s Large Hadron Collider, consists of a ring 17 miles circumference, in which 2 beams of particles race in opposite directions converging and smashing together at nearly the speed of light.

Scientists observe what comes out of the collisions. The standard model cannot account for how particles get their mass. Everything appears to be made of vibration. But there is no “thing” being vibrated.

It is as if there has been an invisible dancer – a shadow – dancing hidden in the valley of the universe. All the other dancers have always danced around this hidden dancer. We have observed the choreography of the dance. But until now, we could not see that dancer.

The so-called “God particle” – the properties of the base-material of the universe – the heart of all matter which would account for the unexplained mass and energy – that drives the universes’s expansion.

But far from explaining the nature of the universe, the discover of the Higgs boson simply presents an even greater mystery, revealing a universe which is more mysterious than we ever imagined.

Science is approaching the threshold between consciousness and matter. The eye at which we look at the primordial field and the eye in which the field looks at us – are one and the same.

Excerpt from around the 20min mark of this YouTube video:

I’m trying to find “non-bogus” videos on CERN. It’s hard. It’s sooo hard because the Christian fundamentalist groups and the “Doomsday-Conspiracy-Theorist” groups and the “Anti-Government” groups and random “terrified people” have created 100’s of videos spreading entertaining & scary “CERN is the God Destroyer” and “CERN is going to allow demons in” and ummm… anyway, watch a few of them and you will see what I mean.. and who knows – it very well might be – we don’t know anything from our tiny little perspectives (which is my point – they don’t know anything from their perspectives either – especially if they are reading a few thousand-year-old revisions from a single book to try and explain CERN)… the videos are really frustrating for someone wanting to learn more about it without the “my opinion” is.. you know what I mean? Like.. Your opinion is just your opinion… your fears are just your fears.. now what exactly is going on?

I have literally watched over 100 CERN videos and I have just recently started adding some of the videos to a private “playlist” on my channel. Some of them are “out there” but they still are less “out there” than most that you would find doing a random search on CERN. I’ll keep adding to it as I find more videos: