Home  •  [Bashar] There is only one moment in Creation

[Bashar] There is only one moment in Creation 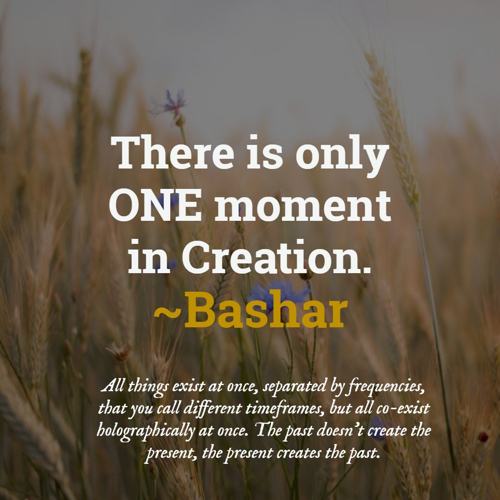 Found a whole bunch of Bashar files on Archive.org so currently listening to them as a break from my Autism research. Here is one explaining the idea that everything already exists and we just ‘tune-in’ to the perception of whatever we want to explore that is resonate to the theme we came here to explore (or something like along those lines…)

Everything exists here and now. Everything really is the same moment, there is only one moment in creation. What you call different moments, is really the same moment from different points of view. You have created an experience you call Linear Space/Time. But that doesn’t mean things actually happen one after another.

Analogy: TV/Film. You understand that if you are watching a television programme on a channel, you know that if you change the channel, it doesn’t mean that the previous programme no longer exists. It still exists at the same time, it is still accessible if you decide to change the channel back, and both programmes are simultaneously being broadcast, but you only perceive the one that your channel is tuned to, because that’s a particular frequency that reality is representative of that frequency. Likewise, the idea of film, is that even though you perceive the story unfolding from moment to moment to moment, and the frames are proceeding through the projector one frame after another, if you are actually the projectionist, you know that you can look at all the frames at the same time. They all exist at once. You can stretch out the film strip and see dozens of frames, simultaneously, but you know that the illusion of one frame, one moment coming after the other, when you flow that film strip through to the screen to create the illusion of movement and change.

This is how physical reality works, it’s how it’s structured. The idea really is to begin with the question “What actually IS time?”.

All things exist at once, separated by frequencies, that you call different timeframes, but all co-exist holographically at once. The past doesn’t create the present, the present creates the past. You are literally becoming a new person, every second that you change. Literally, not metaphorically, literally. And however you define yourself in the present, will determine literally, how your so-called past effects you or doesn’t. Because if you are truly, literally, understanding that you are a new person than a moment ago, then you will understand that it is not just the idea that you are no longer affected by things in the past, it’s that you never had those experiences.

Karma is completely self-imposed. Karma and the concept of re-incarnation, is again, an illusion, it is simultaneous incarnations in parallel realities, thus, any concept of anything that connects one life to another, is simply the product that from the present life, you decided to created energetic cross-links to other simultaneously existing parallel realities, because for some reason based on the theme that you chose to explore in this life, you believe cross-connecting energetically to those other simultaneous lives and downloading information from them, what you call “memories”, would serve you in the exploration of the particular theme of this life, just as those other lives are also cross-connecting to you in other lives to download information that they need to explore the themes they chose to explore by being those people in those lives that exist simultaneously with you. So Karma is your decision to create a blueprint in a sense of connection to other life-experiences going on at the same time that you believe are designed to serve the theme of the challenges you wish to explore in this life, to allow you to grow as a soul and as a spirit.