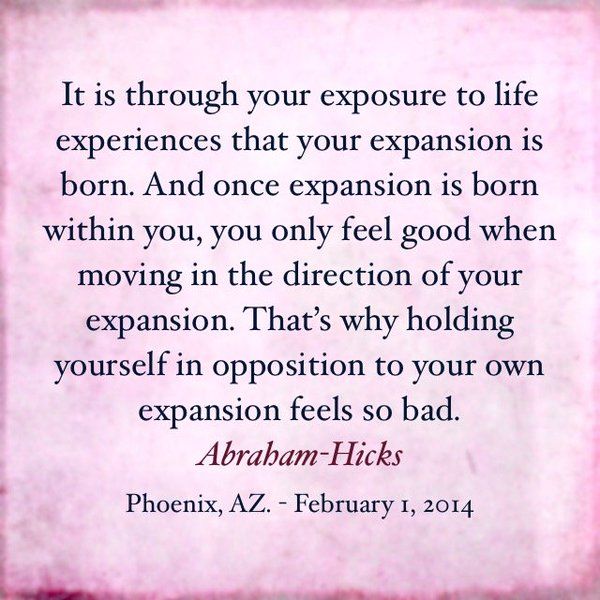 Before you were in this body, you were source energy. But we cannot say you are now only in this body, because you are still source-energy, and part of perspective is focused into this physical body. So here in this physical body as you examine this time-space reality, you come to a new preference. If you don’t have enough of what you want, that preference is born. And here’s the critical part that we don’t think you know:

When in your body on this leading edge, you come to a new idea of what you want, even if you’re not speaking it. When that new idea is born within you, source-energy moves immediately to that new idea.

So if you’re sick, you automatically at every level of your being (on a cellular level too), you ask for wellness, and the source-energy part of you moves dynamically and instantaneously and precisely to that wellness that you are asking for.

Now, hear this:
And when that happens, law of attraction responds to that new vibration where the source-energy part of you is.

When law of attraction responds to something, there is an energy of ‘pulling toward it’. A literal current. And that current is the “current of life” or “stream of life”. A stream of well-being. An eternal force.

When you come to a conclusion – consciously or unconsciously that you want something, source says: “Good idea” and becomes it, and offers the vibration of it so powerfully, that law of attraction responds to it’s vibration, and a current is affected.

Not just “a current”: THE current of life.

When you go with that stream, you thrive.
And if you hold yourself a part from it (which you can’t totally do), but when you try: you don’t thrive.

You will always go with that stream because it’s an eternal stream that you cannot separate yourself from.

You can pinch yourself off from it, but you cannot separate yourself from this stream, and in the moment that you “croak”, you move right to the expanded-version of you.

And then, when a part of that consciousness expresses itself into a physical body (like you), there is a slight variation in your vibration – even on the day you were born – just from what you are observing of the physicality. Just of your observing of “what is not wanted in the physical”. Everything has “what is wanted and lack of it”, and just by being born you pickup on the vibration of your mother who started worrying about you the moment you were born and long before you were born, and now you’re not the pure-vibration you were just seconds ago.

Not to worry though, because the dominant vibration is still there. Then you go to sleep and become one-vibration again. Then you wakeup, go to sleep, wakeup, go to sleep, and begin to adapt to the vibration of your time-space reality, and nothing is terribly wrong. We’re just pointing out to you that your perspective in body is not the same as when you were pure vibrational energy. It’s just the way it is. Deal with it.

You will never be able to be pure, positive, non-physical energy as long as you are in physical. You are the pioneers of thought.

The longer you are here, the more you find things to worry and fuss about. The less you are in alignment to who you really are.

You learn to acclimate to whatever you are feeling. Being irritated is sort of “normal”. Putting up with ‘not having’ becomes normal. It’s not true.

You are the centre of your universe. You’ve come into this environment to decide what it is you want.

Here’s how it works:

There is this you that is evolving, becoming in incremental pieces. Segment by segment, thought by thought, emotion by emotion, experience by experience. You are expanding to be something more than you were, just before you had that experience.

When you have an experience where someone tells you that you are going to do something one way, and so you agree to it, and then they don’t keep their word, then, you feel betrayed. But in the middle of that betrayal, a powerful “I want to deal with people who keep their word” is born. In the middle of that “I wish that I had followed my guidance more clearly”, is a “I’m going to pay more attention to my guidance desire”. In other words, everything that happens causes you to offer a clear vibration of improvement and expansion, because life is serving you in that way.

You, however – you do quite a bit of looking-back. You beat up on yourself, you say I should’ve known better, you beat up on them – you say “they” should’ve known better, you talk to friends to try and get them to agree with you, you join online user groups to hash it out more fully. The non-physical part of you has benefited from your life experience and has expanded as a result of it, and stands with law of attraction responding to that new vibrational version of you.

If you’re out-of-alignment with it, then there’s a gap between you & you. And the simplest way of explaining this to you is “you’re just not letting yourself stay up to speed with who you have become”.

Your negative emotion is not being aligned to you.

You are an expanding being, you cannot stop your expansion (nor would you want to). Here in this physical body, if you want to be happy, you’ve got to find a way to keep up with your expansion.

Even your planet, everything that you know that is physical was at one time an idea, a thought.

So as you’ve lived life, and you’ve had this idea of what you want, this idea is then embraced by non-physical and it is tendered there until it becomes form.

It’s an idea that you have incrementally built even before you got here in this body. There are parts of you that you set forth while you were only non-physical energy, and now that you are living it, it has become a viable force of life.

You are in control – you did it all.

If you think you’ve got to “make it happen”, then you have not heard us.

All you can do.. all the power that you have right now – is feel worse or feel better. You don’t have the power to feel “great” from where you are. The frequencies are different. You can’t quantum leap, but you can stop paddling upstream.

You come forth from non-physical and you are so exhilarated about the idea of being here with all of the dynamics of this time-space reality to inspire you to new ideas. You are exhilarated as you come. You lap it up. You collect the data – even things that you think you don’t like from the non-physical perspective you’re just so enjoying all of these possibilities. And you’re constantly giving birth to these new ideas. And from your physical form, this is the way you are living your life. You give birth to the new idea which gets the stream going, and then you say “I don’t like that”. Most humans live their entire life pointed there.

Every single thing that happens to anybody that is not in vibrational alignment with what you want, is about you and your relationship with the stream.

“Abraham, Come on, Be real, there are bad things that are happening in this world and isn’t my responsibility to give my attention to these bad things”

We say: Yes, in fact it is. Yes it’s part of the reason that you wanted to come into this time-space reality, because you knew when you saw something that you considered to be a bad thing, that it’s good counterpart would occur to you. You knew that when you see something that you don’t want, what you do want would come. You knew that when you saw a problem, that you would ask for a solution. You have instant communication worldwide. There has never in all of the universe been a time where more dynamic creating has been going on. There has never been more asking than the likes of this human race than this time. Which means the stream has never moved so fast. Which means the potential of the ride of your life, is upon you. As this stream moves faster and faster, you feel the negative emotion stronger. Now you have a conscious awareness of the stream – you know everything. You have this knowing. You now know who you are, why you’re here, and what to do. You will never again feel negative emotion and not know that you’re pointed upstream.

Make peace with where you are. I am where I am.
The stream is moving towards what you want.

You wanted this “ride down the river”

When something you want isn’t manifesting instantly… we thought you wanted a ride on the river? What you are going to begin to understand is the river will take you to wherever you want, but life is going to cause you to keep asking for more. So you’re not ever going to get it done.

The vibration comes first – you have to line up with it first.
You’ve already done most of the work.
The feeling of “relief” is the call of source.
The expanded version of you is always calling for you downstream.

You are source-energy that is expanding.

When you see something you like and you say yes to it, you attract it. When you see something you don’t like and you say no to it, you attract it. Because there is no such thing as ‘no’ on a universe that is based on attraction. There is not a word that means no, every word means yes, come to me. So everything you see in yourself that you do not like, you amplify. “Stay here flaw”. Everything you give your attention to, you activate in your vibration. Law of attraction is very consistent in letting you know what is active in your vibration.

Look at your life to know what is active in your vibration.

Start telling your prosperity story, the life-treats-me-good story, the ‘people are really nice to me’ story. I’m a pure positive being story. Isn’t it nice, wouldn’t it be nice, isn’t life good to me?

Tell the lie until you can’t tell the difference.

Life is your playground.

Looking from wherever you are, for the best thing that you can find & putting it into your vibrational pocket. Scour your moment to moment for worthy things. The secret of life is remembering my worthiness to that knowledge of wellbeing.

Reach for the best-feeling thought that I can find from where I am standing. Everything is queued up for your success. I am where I am, and where I am is ok.

In the beginning, there is the Infinite One. This is the source of All That Is. Infinite consciousness. Intelligent infinity. It is the undifferentiated absolute. Within it is unlimited potential, waiting to become. Think of it as the “uncarved block” of your Taoist traditions.